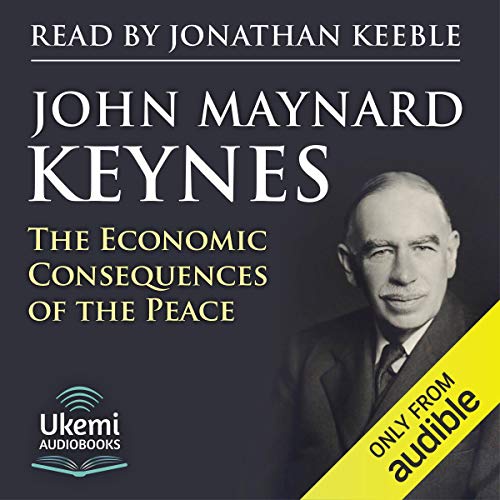 The Economic Consequences of the Peace (1919) was one of the most important documents to come out of World War I - specifically the period of the Armistice and the subsequent settlement negotiations. And, a century on, it remains of particular relevance to our times - an uncompromising and forthright analysis of how international diplomacy can be suffused by personalities, prejudices, personal ambition and outright, uncontrolled feelings of revenge.

In 1918, John Maynard Keynes - then still in his mid-30s - represented the British Treasury in Paris at the meetings which would result in the Treaty of Versailles. Highly intelligent, extremely competent and with a perspicacity and diligence which were to make him one of the key economic figures of the 20th century, he was first of all shocked and then appalled by the unseemly behaviour of the Allies’ delegates. Georges Clemenceau, the aged French diplomat, and his compatriot Field Marshall Foch were intent on extracting punitive damages from Germany which, as a by-product, would crush it economically and socially. Lloyd George, the British Prime Minister, supported the unrealistic demands for reparation because it would enable him to get reelected with a comfortable majority. President Woodrow Wilson, though full of idealism, proved no match against the wiles of hardened European negotiators.

Keynes saw clearly that the reparations the Allies wanted to extract would prove impossible for Germany to meet without placing its population at starvation levels, crushing its industry for decades to come, and sowing the seeds for another round of terrible violence - either through communist revolution as in Russia, or by an upsurge of right-wing nationalism. In the spring of 1919 Keynes left Paris, returning to England to write this damning account of what happens when older and entrenched politicians pursue their own ends.

With a considerable amount of detail, Keynes matches the undeniable war damage on one side and the inability of Germany, stripped of its monarchy, its merchant fleet, its colonies and important coal mines, to pay $30 billion in reparations, with the sword of Damocles of compound interesting hanging over late payments. Keynes’ measured logic cannot wholly disguise a deeply felt European passion as old men, still mired in nationalistic protectionism, concluded a treaty that led, ineluctably, towards another world war, as Keynes predicted. The Economic Consequence of the Peace is required listening in the 21st century. Jonathan Keeble brilliantly relays Keynes’ concerns.

What listeners say about The Economic Consequences of the Peace

Keyes was one of the most brilliant men of the 20th century. It is stimulating to listen to such brilliance. One expects dryness from an economist, but Keynes was a great writer. I’ve read several books on the Treaty of Versailles, most notably Margaret Mitchell’s excellent Paris 1919. But nobody clarifies the defects of the Treaty as well as Keynes. In fact he rips it to shreds and backs it up with the math. He also shreds Woodrow Wilson. Some historians have speculated that Wilson’s failure may have been due to contracting the “Spanish Flu”. However Keynes portrays Wilson as unequipped from the start and a second rate intellect. Quite brutal take down. The narrator Keeble is quite good.

The consequences of revenge economics

The audiobook is beautifully read by Jonathan Keeble with feeling and gravitas: the indignation and astonished disbelief of JMK's prose shines through in the performance. Clemenceau, Wilson and Lloyd George all get a thorough tongue-lashing by Keynes. As a “story”, the Economic Consequences of the Peace reads like the dissection of a slow-motion car-crash where the resultant Treaty of Versailles ineluctably leads to 1933 and thence to WWII. Absolutely fascinating.

how smart was this guy

listening today to something written in 1919 and knowing how thibgs turned out.. Amazimg guy.