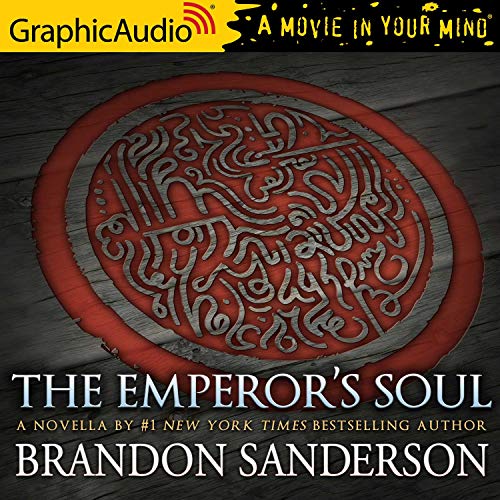 When Shai is caught replacing the Moon Scepter with her nearly flawless forgery, she must bargain for her life. An assassin has left the Emperor Ashravan without consciousness, a circumstance concealed only by the death of his wife. If the emperor does not emerge after his hundred-day mourning period, the rule of the Heritage Faction will be forfeit and the empire will fall into chaos.

Shai is given an impossible task: to create - to Forge - a new soul for the emperor in less than 100 days. But her soul-Forgery is considered an abomination by her captors. She is confined to a tiny, dirty chamber, guarded by a man who hates her, spied upon by politicians, and trapped behind a door sealed in her own blood. Shai's only possible ally is the emperor's most loyal counselor, Gaotona, who struggles to understand her true talent.

Time is running out for Shai. Forging, while deducing the motivations of her captors, she needs a perfect plan to escape....

What listeners say about The Emperor's Soul [Dramatized Adaptation]

highly recommended... Sanderson is genius....and this is a masterpiece...and because og graphic audio it becomes super amazing

I love the story, but not the graphic audio

I have loved The Emperor's Soul by Brandon Sanderson and I'm sure some will like this graphic audio version, but I don't care for it. The sounds distract from the story and I don't think the main narrator is that great either. I may be biased because I have come to love Kate Reading and Michael Kramer who are incredible narrators. I would suggest purchasing their version of the audiobook rather than this one, unless you just really love graphic audio.

A brief Cosmere treat from Sanderson. This is an obscure yet colourful story, like a masterful sketch: it draws the beautiful outlines of a world and its people, giving us just a peek into the general context and the depth of the characters. Sanderson writes magic masterfully, delving into really interesting concepts which he explores in this piece more than the characters themselves.

As for the dramatisation, it has been done wonderfully and enhanced the experience a lot. The narration is impeccable, each character gaining a lot of flavour and personality through their voice, and the music was just in the savory spot between ignorable and protagonist. I will choose dramatised versions in the future whenever possible, and I'm thankful to the team behind this audiobook for showing me this way of enjoying literature.

All in all, a fantastic audiobook, strongly recommended!

A retelling of a Earth story set in the world at large in the time people forget and are remade. The story has long term consequences to your understanding of what is known.

Better than the original. And that's saying something as I highly respect Kate Reddings work.

Brilliant story as it was but made exceptionally better by this performance. Absolutely must listen, especially if you're a Sanderson/Cosmere fan