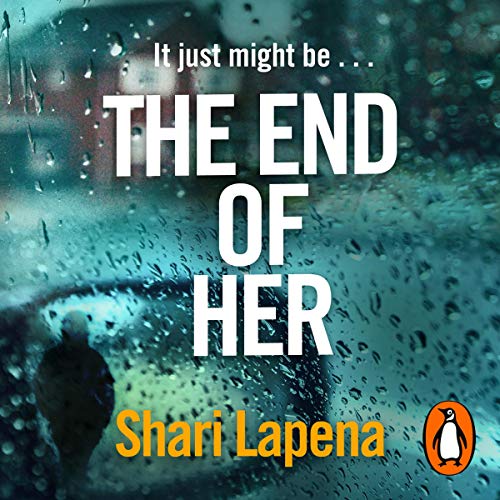 The End of Her

It starts with a shocking accusation....

Stephanie and Patrick are recently married, with newborn twins. While Stephanie struggles with the disorienting effects of sleep deprivation, there’s one thing she knows for certain - she has everything she ever wanted.

Then a woman from his past arrives and makes a shocking accusation about his first wife. He always claimed her death was an accident - but she says it was murder.

He insists he’s innocent, that this is nothing but a blackmail attempt. But is Patrick telling the truth? Or has Stephanie made a terrible mistake?

How will it end?

What listeners say about The End of Her

Full of twists and unexpected turns. I couldn’t put it down. I loved the story and the ending!

The narrator's male voice readings were really off putting. Probably just me but I struggled to enjoy the over all book.

Not as good as her other books

I would to buy Shari Lapena books right away, but after this one I will be a little more hesitant. Good 3star/maybe 4.

I have loved every single one of Lapena’s books! This one included! I devoured it in a couple of days and found myself putting plans off just for 5 more minutes listening time!! The only thing I would say is that there was one of two seemingly pointless events that happened in the book, that were left unanswered and seemed to have no bearing on the plot... i dont know if I am missing something, but it felt unusual for lapena to leave areas of the plot not tied up. I will be furiously googling to see if I did miss anything, but either way, it was cracking and I would totally recommend!

I have read all Lapena books. This is my least fav

This book kept me interested.I have read all of Shari Lapena books and I feel this is the worst book yet. I loved her other books and was looking forward to reading this on its release.
I found myself getting fed up of the repetition. The book dragged on a bit, I stuck with it expecting a really good ending. No such luck.
I was disappointed with the ending for 2 reasons. The first reason being that it was not very exciting. The second reason is because too many questions were left unanswered.

Reallyally enjoyed this. Sleep deprived parents of twins, blackmailers, lots of badly behaved people annoying the hell of each other. Twists and turns and the person who commits the biggest crime? your almost on their side 🙂

Enjoyable story and the narrator was very good. It’s multi layered and held my interest.

Will not be able to put it down!

I consumed it in a day. . . . I absolutely adore Shari Lapena’s compulsive thrillers. Great book! 5*****

Good story line with a good twist at the end. If we think like that how complicated we are.

A fun read but dragged in the middle

It was great then it just kept going in the middle there. I listened to it on 1.5x from chapter 35-50 as it was getting on a bit. Glad I finished it as it was a fun listen but felt at least 10 chapters weren’t needed.

I enjoyed this novel, although it left me asking questions at the end. The final few chapters seemed rushed, while most of the storyline seemed to drag on. Regardless, it was pleasant to listen to.