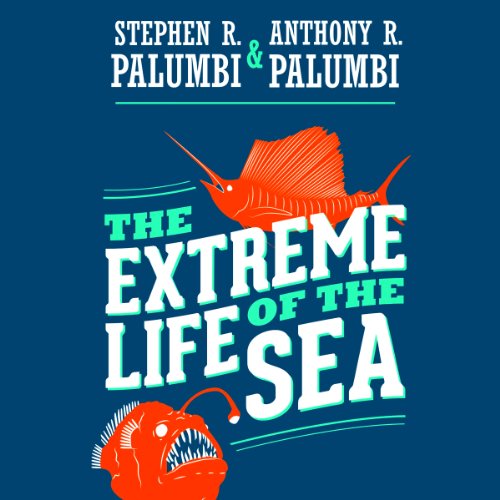 The Extreme Life of the Sea

The ocean teems with life that thrives under difficult situations in unusual environments. The Extreme Life of the Sea takes listeners to the absolute limits of the ocean world - the fastest and deepest, the hottest and oldest creatures of the oceans. It dives into the icy Arctic and boiling hydrothermal vents - and exposes the eternal darkness of the deepest undersea trenches - to show how marine life thrives against the odds. This thrilling book brings to life the sea's most extreme species, and tells their stories as characters in the drama of the oceans. Coauthored by Stephen Palumbi, one of today's leading marine scientists, The Extreme Life of the Sea tells the unforgettable tales of some of the most marvelous life-forms on Earth, and the challenges they overcome to survive. Modern science and a fluid narrative style give every listener a deep look at the lives of these species.

The Extreme Life of the Sea shows you the world's oldest living species. It describes how flying fish strain to escape their predators, how predatory deep-sea fish use red searchlights only they can see to find and attack food, and how, at the end of her life, a mother octopus dedicates herself to raising her batch of young. This wide-ranging and highly accessible book also shows how ocean adaptations can inspire innovative commercial products - such as fan blades modeled on the flippers of humpback whales - and how future extremes created by human changes to the oceans might push some of these amazing species over the edge.

An absolute necessity for anyone interested in learning about marine animals and the sea. The authors have managed to simplify ecological concepts and still keep it very interesting. 5 stars!

A wonderful survey and an important warning...

Would you listen to The Extreme Life of the Sea again? Why?

I would definitely listen to this book again. It is so chocked full of information that it's difficult to process it all in one hearing, and it's so easy to listen to that it makes an excellent travelling companion, even if you're just looking for something random and interesting to listen to.

While it discusses a lot of serious topics (marine biology, evolution, biochemistry, climate change, over-fishing), it's never inaccessible, even if you know almost nothing about the topics beforehand, but it doesn't feel dumbed down.

What does Stephen Hoye bring to the story that you wouldn’t experience if you just read the book?

Hoye brings very little to the book, by which I mean that his reading feels almost completely unobtrusive, just what I want in a science audiobook. He also never mispronounces even the more difficult terms (at least the ones I knew how to pronounce!), which is a rarity.

Where does The Extreme Life of the Sea rank among all the audiobooks you’ve listened to so far?

This sits at the top of my list of informative audiobooks. Clearly outlined are the dilemmas we have with ocean life and what must be done to save it. This book takes you into the lives of several extraordinary sea creatures; explaining their needs to survive and the importance they play in a balanced ecosystem. This helps us better understand the impact created by man on the ocean ecosystem and how out of whack it has become. The author gives us hope but makes it clear that we don't have much time to save the life of our planet. Make sure to download the pdf with this audiobook. It includes great visual representations and charts. Very well read audiobook.