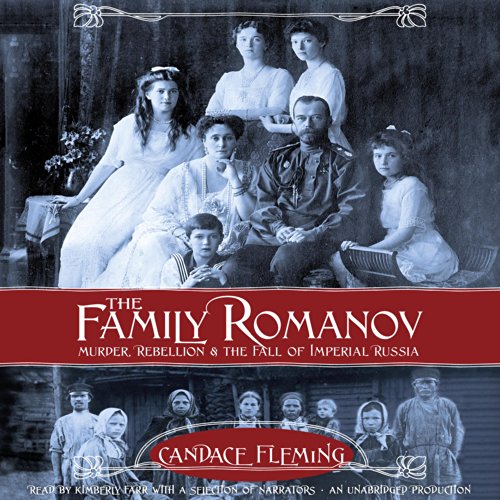 From the acclaimed author of Amelia Lost and The Lincolns comes more nonfiction at its very best - and a perfect resource for meeting Common Core standards.

Here is the riveting story of the Russian Revolution as it unfolded. When Russia’s last tsar, Nicholas II, inherited the throne in 1894, he was unprepared to do so. With their four daughters (including Anastasia) and only son, a hemophiliac, Nicholas and his reclusive wife, Alexandra, buried their heads in the sand, living a life of opulence as World War I raged outside their door and political unrest grew.

Deftly maneuvering between the lives of the Romanovs and the plight of Russia’s peasants - and their eventual uprising - Fleming offers up a fascinating portrait, complete with compelling primary-source material that brings it all to life. History doesn’t get more interesting than the story of the Romanovs.

“A wonderful introduction to this era in Russian history and a great read for those already familiar with it." (Publishers Weekly, starred review)

"For readers who regard history as dull, Fleming’s extraordinary book is proof positive that, on the contrary, it is endlessly fascinating, absorbing as any novel, and the stuff of an altogether memorable reading experience." (Booklist, starred review)

What listeners say about The Family Romanov: Murder, Rebellion, and the Fall of Imperial Russia

this book had me on edge, from me only knowing the cartoon movie about Anastacia and not really knowing the Romanov family history, this book really informed me of the Russian history... I was amazed at the detail of events that happened to this family and how destroyed and destructive Russia was until the fall of the royal family.. I would definitely recommend listening to this book.. even hearing what was written from the diaries of the royal family and other who interacted with them was interesting and touching..

Sometimes The true history is more interesting than fiction. I enjoyed the suspense as well as the learning. The narrator was mostly average.

Candace Fleming offers an intimate look at the life and death of the last royal family of the Czarist empire. The intimacy of the profile is reinforced by personal letters, contemporary literature, and historical accounts of the 1917 Russian revolution. Fleming reaches back to the beginning of Czar Nicholas’s reign 23 years earlier and ends with the families slaughter in the basement of a house in Yekaterinburg, Russia. East of Moscow and southeast of St. Petersburg.

Fleming offers an interesting and intimate view of the last Czar’s family. It is not laudatory but one comes away from the story feeling that the death of Nicholas and his family, like Louis XVI and Marie-Antoinette, were the result of changing times; not their ineffective, injudicious rule. They deserved to be dethroned but not murdered.

Money, power, and prestige corrupts all human beings–rich, poor, religious, or secular. Democratic regulation; not autocracy, social justice; not vigilantism, peace; not war are the needs of society.

Detail story of Romanov Dynasty describing historical facts of not only daily life of imperial family but many important historical invents at that period of time. Easy to adopt to own knowledge and enjoyable performance of the narrators. Recommending with confidence.

Would you listen to The Family Romanov: Murder, Rebellion, and the Fall of Imperial Russia again? Why?

Yes. A very interesting subject matter. To savor all the details again. Lots of people and facts to remember.

The narrator is pretty bad. She reads this complex, tragic history as though she's talking to a class of third graders. Her tone sometimes sounds like she's reading Red Riding Hood. She simply can't get the elementary school teacher tone out of her voice. It diminishes the "heavy" subject matter and makes it seem less history and more a Grimm's fairy tale.

The introduction of heavily accented male voices in the narrative also makes some of the words hard to decipher.

A subject like this should be read with a more "adult" voice.

Author did wonderful job contrasting Romanov family life with political life and against the lives of the peasants. This is a really fun read.

Good introduction to this family

I liked this book. it was a good introduction to the last Tsar and his family. Probably not the in depth history that some might want, but a good starter for a rookie like me.

This was a very captivating read/listen. Narrator did well to hold interest the whole time. The pairing of the story of the Romanov's with the daily life if many of its citizens was jaw dropping at the extremes. Learning about the prelude to the fall of the Romanov dynasty and the rising of the bolsheviks was sad in that the real victims were the Russian people. They wanted bread, freedom and land and didn't get it from any of their power hungry leaders. They are a resilient people with a captivating history.

The narrarator made it hard for me to get through

I just finished The Last Czar on Netflix and wanted to read a book that gave more detail on the Romanov family. To my dismay, it covered almost the exact same information as the mini-series and did not give me the depth that I was looking for in a history of the Romanovs. Additionally, the narrator reads as if she is speaking to children. It was very hard to get past it to finish this book. I'm not sure what other books are our there on the Romanov family but I don't recommend this one.

A wonderfully rounded and eye opening story of the Russian revolution from the Nickolas himself to the very peasants who worked the country side. A good listen for any interested in this interesting and dark piece of history.

An interesting and informative read. I really enjoyed listening to it. would recommend to anyone wanting to find out more about the revolution, but not wanting to get too bogged down in the political intricacies of the period.

An excellent book. For anyone who is interested in the history of the Romanovs, this book is a must. Historically accurate and well read, I enjoyed every second.

A detailed, sensitive and engaging account of the life of the Romanov Family and the end of Imperial Russia. An educative novel for anyone interested in learning about this significant period in human history as well as understanding how countries can be run.