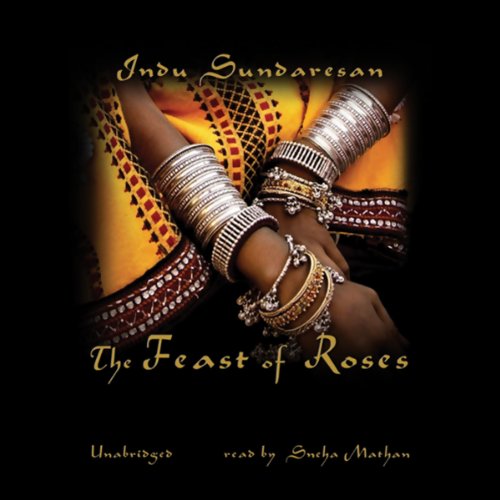 The Feast of Roses

In her critically praised debut novel, The 20th Wife, Indu Sundaresan introduced the love story of Emperor Jahangir and Mehrunnisa. The story continues in this lush sequel, when Mehrunnisa comes into Jahangir's harem as his 20th and final wife. This time, Jahangir has married for love, and members of his court are worried that Mehrunnisa could exert control over their futures. Their concerns are well founded.

Despite the rivalry of the imperial harem, which has plotted against her from the beginning, Mehrunnisa soon becomes the most powerful woman in the Mughal Empire. She rules from behind the veil, securing her status by forming a junta of sorts with her father, brother, and stepson and by risking all, even her daughter, to get what she wants. But she never loses the love of the man who has bestowed this power upon her.

"Weaving another rich historical tapestry...Sundaresan colors the life of a fascinating woman whose female wiles inspired the Taj Mahal." (Booklist)
"The novel's scope and ambition are impressive, as are the numerous period details....Readers who enjoyed the first volume will find similar pleasures tracking the fate of one of history's most intriguing women." (Publishers Weekly)
"Sundaresan's love of storytelling is apparent in this well-researched historical romance. She makes sure that the reader stays enthralled from chapter to chapter and, with this sequel, will surely do the same in creating anticipation for her next book." (Library Journal)

What listeners say about The Feast of Roses

I thoroughly enjoyed this.The narration was fantastic.This is the longest audible audiobook I have heard till now , never did I feel bored.The story is good.

The narration does not capture the correct emotion of the characters. The strange haughty tone the narrator gives to the characters' dialogues gets irritating at times. A few Urdu words are also pronounced wrongly.

While the narrator's accent and recounting are superb, her mimicking of accents for people other than the main protagonists in English, is jarring and condescending .

Must read or rather heed

It’s absolutely an amazing recount of fact and fiction , beautifully narrated that one’s likes and dislikes of characters come to play . It’s unstoppable and one is richer in knowledge by going through this book

very nice story although in parts fiction, is nicely written by the author and the narrator brings out the story which makes it interesting to listen.

Another magnificent masterpiece created by Indu Sundaresan with outstanding narration that I loved from beginning to end. The writer's creative technique and the narrator's superb presentation brings ancient India to the 21st century for both history buffs and those not so historically inclined. Every character and event is vividly depicted with grand literary performance and dialogue. The Twentieth Wife is a must read in order to grasp the potency and familiarity with all the amazing characters, and unlike most novel sequels, The Feast of the Roses will not disappoint! Sundaresan certainly raised the bar with these outstanding works of sheer enjoyment so its going to be pretty hard for me to find another author that comes close to measuring up!

Perhaps too sympathetic, but a great love story

I listened to and loved The Twentieth Wife and bought this title with my very next credit. It is the sequel which takes the story of Empress Nur Jahan from her marriage to Jahangir to the time of his death. Sundaresan is very sympathetic towards both, tempering Nur Jahan's ambition, and emphasizing her romantic love for her husband. While the passion shared between the two was legendary, I have learned that most historical accounts emphasize her tendency to be manipulative and harsh and suggest that she took advantage of her husband's addictions to drugs and alcohol. Here she seems to be valiantly struggling to be her own person in a man's world. I personally liked this softer interpretation. It is a great love story, but I question the historical accuracy of its anachronistic feminist overtones.

The narrator is very good. There are perhaps a few too many descriptions of the oppressive heat, street life, and meals. Overall, however, the author provides a fascinating account of Indian politics and history of the seventeenth century and the strategies used to deal with increasingly intrusive Portuguese and British merchants and missionaries. Nur Jahan, by the way, was the aunt of the woman for whom the Taj Majal was built.

I very much enjoy historical fiction, but being a guy I'm not an into the romatic variety! This story along with the first book (The Twentieth Wife) does what good story's do ... they put you into that time and place. I also liked the fact that this strong female character earned her position - in a male dominated world that could not understand how love can make us a stronger, better person, not weaker.
Also, Mughal India with its wealth, intelligence, and corruption will fascinate you. These two books are both beautiful and fascinating and well worth the listen. I originally got these books for my wife to listen too, but I think I enjoyed them as much, if not more than she did!
The Narrator Sneha Mathan does a wonderful job.

I listened to the first book and this is the sequel to it. I enjoyed the first one, The 20th wife, more. It had more "story" to it. Truly, with this one, I felt as if the author was just repeating history she had researched from the very extensive journals of India's moguls. It just spouted off facts about battles for power until finally, I couldn't finish it. I really wanted to as I felt committed to the two books but I couldn't take the boredom any longer. Kept hoping it would pick up but it didn't. I will say, though, that is this narrator is SUPERB.

I can't say enough about this reader; I wish she had more performances. She is perfect for this book (and the other in the series), which is beautifully written.

A joy to listen to!

Completing the Story of Nur Jahan

I suggest listening to "The Twentieth Wife" first, as this picks up where the previous book ends. Nur Jahan, historically, has been overshadowed by her niece, Mumtaz Mahal, but was actually much more interesting as a person. Snetha Mathan is a very good reader, but the production needs considerable improvement, as the editing is very sloppy, with many repeated sentences. Nevertheless, I recommend this for anyone who enjoys a good historical novel.

Most beautiful narrator voice I have ever heard

Truly an amazing sweeping epic novel, most beautifully written and splendidly visual. The narrator's voice is the most eloquent elegant perfect English I've ever heard.

I loved this book. Couldn't wait to get the sequel "the twentieth wife"! Wonderful reading

This author has a great skill writing battle scenes and creating lush images of Mughal India. Her novels start slowly, but they always gather speed and intensity. Only the epilogue seemed a bit flat. The narration is beautiful. I enjoyed every minute.

I thouroughly enjoyed this exotic book set in the royal court in India.

The Feast of Roses

Loved this book and would like more from Indu Sundaresan!

I really enjoyed this book - it’s a rich account of a part of the Moghul empire about which I knew little- loved the strong empress - would love to see this made into a movie!