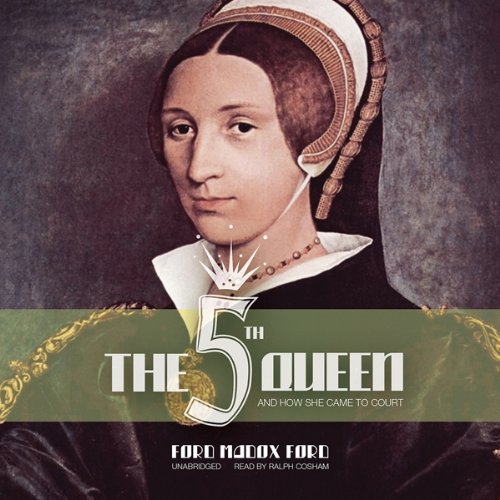 The Fifth Queen is Ford Maddox Ford’s masterful trilogy of historical fiction centered on Katharine Howard, a young girl of a proud, noble, and impoverished family who catches the jaded eye of Henry VIII and becomes his controversial fifth Queen.

In this first volume, Katherine arrives at the King's court to find its dimly lit corridors vibrating with corruption and fear, as unscrupulous courtiers hungry for power maneuver for advantage. Clever, beautiful, and outspoken, Katherine soon becomes caught in a web of intrigue and romance as she fights for political and religious change.

Ford saw the past as an integral part of the present experience and understanding. His sharply etched vision of the court of Henry VIII, first published in 1908, echoes aspects of Edwardian England as it explores the pervading influence of power, lies, fear, and anxiety on people’s lives.

What listeners say about The Fifth Queen

All history has said Howard was a foolish, uneducated teenager who did her best with an obese King with a reeking wound on his leg. Clearly involved with men closer to her own age and in her cousin especially.This author has her the most learned, saintly of women. Wise beyond her years and dedicated to bringing England back to the Catholic faith, deeply in love with Henry, who is large but not disgustingly so and whose leg is now healed. The language was sounding very old England and traditions, etc were good. But this is a view of this queen the likes of which no one has heard.

I have attempted to listen to this book but have to stop each time. I've restarted and stopped at least 4 times. The issue with this book is not the story but the narration. The narrator speaks so quickly and since the dialogue, in the book, is written in "Olde English" it is extraordinary difficult to understand the narration.I believe that this is a book that has to be read. Also, the book is historically very inaccurate although it is a novel.

Not an easy listen

I downloaded this as I've really enjoyed recent books on the reign of Henry VIII, most notably Hilary Mantel's books. I gave up on it after a few chapters. I found the writing style very clunky with too much 'telling not showing' about the characters. Ford Madox Ford really likes his adverbs! I might have persevered in written form but Ralph Cosham's narration finished it off for me in this audio book. He reads too fast and has a 'rat a tat' style of delivery that gets wearing very quickly.