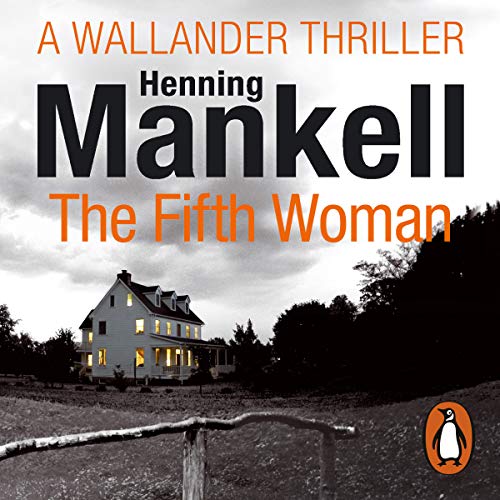 Four nuns and a fifth woman, a visitor to Africa, are killed in a savage nighttime attack. Months later in Sweden, the news of the unexplained tragedy sets off a cruel vengeance for these killings.

Inspector Kurt Wallander is home from an idyllic holiday in Rome, full of energy and plans for the future. Autumn settles in, and Wallander prays the winter will be peaceful. But when he investigates the disappearance of an elderly birdwatcher, he discovers a gruesome and meticulously planned murder - a body impaled in a trap of sharpened bamboo poles.

Then another man is reported missing. And once again Wallander's life is on hold as he and his team work tirelessly to find a link between the series of vicious murders. Making progress through dogged police work and forever battling to make sense of the violence of modern Sweden, Wallander leads a massive investigation to find a killer whose crimes are the product of new realities that make him despair.

What listeners say about The Fifth Woman

Sweden's Inspector Wallander solves another baffling series of murders while juggling various developments in his personal life. While perhaps not one of his best efforts, Henning Mankell has produced a well rounded book, well narrated by Sean Barrett and worthy of a top tier rating in my library, along with the rest of the series.

It was ok. Though drawn out with Kurt's depressive nature. The novel could have been shorter giving more impact to the mystery.

Sean Barrett was great, as always.

Upon reflection I realised its been over two years since my last Wallender making this book all the sweeter, absence really does make the heart fonder. The combination of Mankells' driving narrative from the lips of Sean Barrett had me transfixed. I'd forgotten just how much depth both men are capable of infusing into seemingly banal situations. Only trouble is how addictive the experience is. Got a feeling I'll be revisiting past pleasures to get my fix..... Highly recommended (just make sure you save some for me)

the whole book was intriguing. I loved it . narrator was fantastic. could not fault it .

Another enjoyable Wallander thriller and very well read, but there is bad audio interference in the first 3 chapters!

The storyline was gripping from start to finish whilst the epilogue explained the missing pieces.

I am a fan of the television adaptations of these books, so wasn’t sure if the books and the narrator would be as good.

Definitely as good, probably better. The longer timeline gives a more nuanced story and better character development than there is time for in a tv serial.

A real positive is the relatively straightforward personality of Wallender, without the irritating quirks TV producers seem to be obsessed with.

And only a little dated. Wallander not going through too much personal strife, fortunately (I have little patience for that in crime thrillers) and while the motivation for the crimes is ever so slightly sketchy, the scope and measured development of the investigation is satisfying and absorbing. High quality stuff.

I love the author, the intricate plots, believable characters that you care about (even the perpetrator!) and the narrator is, as, always superb. We adore Sean!!

Another gripping tale and performance

Thoroughly rnjoyed this Wallander. Strong story and an excellent perfotmance; lovely cadence, the rhythm of the performance carried the story beautifully.

Another good read and really love Sean Barrett's narration. On to the next one in the series. I am waiting for the one that cracks 5 stars though! The one that for me reaches Stieg Larsson proportions, one can only hope!

The whole series is great.
Another simple but gripping and sometimes surprising narrative. Would recommend