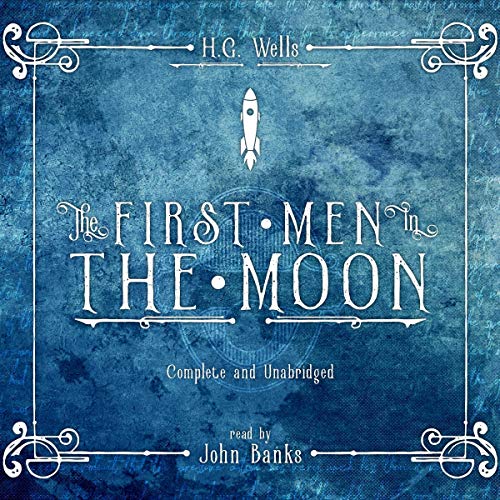 The First Men in the Moon

As a result of an accident with an experiment, two unlikely friends are propelled on a journey to the moon. But a whole new universe of terrors await them there, including the insectoid Selenites. Will they be able to overcome these perils and find a safe way home?

When penniless businessman Mr Bedford retreats to the Kent coast to write a play, he meets by chance the brilliant Dr Cavor, an absent-minded scientist on the brink of developing a material that blocks gravity. Cavor soon succeeds in his experiments, only to tell a stunned Bedford the invention makes possible one of the oldest dreams of humanity: a journey to the moon.

With Bedford motivated by money, and Cavor by the desire for knowledge, the two embark on the expedition. But neither are prepared for what they find - a world of freezing nights, boiling days and sinister alien life, on which they may be trapped forever.

About the Narrator: John Banks is one of the UK's most prolific audiobook narrators, working for the likes of Big Finish, Audible, Random House and Games Workshop. He is a true multi-voice, creating everything from monsters to marauding aliens. He is also an accomplished stage and TV actor.

About the Author: Herbert George Wells was a novelist, teacher, historian and journalist, who has become known as the "father of science fiction." His works have been adapted countless times, and provided the basis for many literary and theatrical productions.

I do love how H.G. Wells foresaw many of the facets of space travel that came over half a century later.