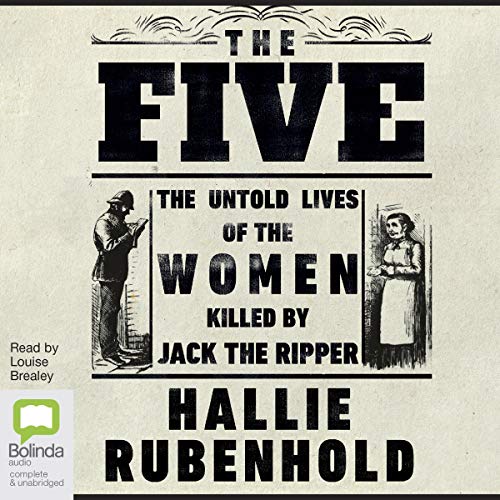 Five devastating human stories and a dark and moving portrait of Victorian London - the untold lives of the women killed by Jack the Ripper.

Polly, Annie, Elizabeth, Catherine and Mary-Jane are famous for the same thing, though they never met. They came from Fleet Street, Knightsbridge, Wolverhampton, Sweden and Wales. They wrote ballads, ran coffeehouses and lived on country estates; they breathed ink dust from printing presses and escaped people traffickers.

What they had in common was the year of their murders: 1888. The person responsible was never identified, but the character created by the press to fill that gap has become far more famous than any of these five women.

For more than a century, newspapers have been keen to tell us that ‘the Ripper’ preyed on prostitutes. Not only is this untrue, as historian Hallie Rubenhold has discovered, it has prevented the real stories of these fascinating women from being told. Now, in this devastating narrative of five lives, Rubenhold finally sets the record straight, revealing a world not just of Dickens and Queen Victoria but of poverty, homelessness and rampant misogyny. They died because they were in the wrong place at the wrong time - but their greatest misfortune was to be born a woman.

What listeners say about The Five

Such an important book!!

I absolutely LOVED this book. So heartbreaking and such an eye opening account.

Jack the Ripper has achieved cult status, at the expense of his victims. Even today, most of us wrongfully believe the maligned and prejudiced account of the victims' lives - that there were "fallen women" or "prostitutes".

This book sheds light on the true biographies of the victims and proves without a shadow of a doubt, the double standards of the Victorian era - attitudes that are common even today across the world.

This book is a must read. While the narrator was good, I really recommend that you take the physical/Kindle version. The narrator has a very thick British accent and there were times I missed what she said, because I couldn't understand her through the accent.

well worth giving a listen

This is probably one of the best audio books I've listened to. It is so in depth and is so respectful to the canonical 5 and really drills in that they were real women with lives and families and not just a sex worker who fell victim to Jack the Ripper.

The story you think you know, but don't.

Turn history on its head. The women each have unique histories and what I thought I knew about them was mostly false. Amazing research has gone into this book. The stories are brilliantly written and the narrator is compelling.

An Insight in to the lives of the poorest women

I downloaded this book with a low expectation, having seen the reviews of some who had been very critical. However from the first moment, I was mesmerised in to a world I knew little about. A world of utter desperation, and hopelessness. A world familiar to the poorest in Victorian society.

The research here is simply astonishing, and the way in which lives have been revived and the tragedy of their tales is breath-taking. Yes there is speculation, and hypotheticals, but these are based on evidence and comparators.

In the course of the book I stopped seeing these canonical five as victims, and began seeing them as women. Women who had been abused, degraded and disposed, both by the Victorians and by contemporary writers ever since. I do doubt these women were prostitutes, but why should that matter - no one should have there life cut short regardless of where one works.

But we continue to abuse these women to this day, in how we think of them, how our language describes them, and who is remembered.

The narration is beautiful, the writing is strong, the story is compelling, but most of all my perspective was changed.

An unexpected gem of a book

I listen to a lot of audio books and this is certainly one of the best. A great deal of detective work has gone into collecting a wealth of information about the five victims of Jack the Ripper. History has judged these women unjustly labeling them as prostitutes and thus less worthy of sympathy. This book tells a different story and at the same time reveals the awfulness of life for the poor in Victorian society, particularly for women who had little protection if left without a male partner. The life stories of the five women are extraordinary and far more interesting than the lurid accounts of their murders.

This is such a fantastic book, the story being told is one that everyone needs to know.
It is written in such a way that you can imagine living and breathing in Victorian London on every page.
I will be highly recommending

Absolutely loved this. The lives of the women are so incredibly interesting, and significantly more so than anything I have read about their killer. Would highly recommend!!

Can’t recommend this highly enough. The factual telling of the stories of these women’s lives and their humanity with such respect, treating them with the dignity they always deserved but, until now, had been denied. A really moving, layered, powerful book. ‬

Famous for nothing more than being victims of Jack the Ripper, the reputations of five women have for years been tarnished by claims that they were simply prostitutes, sex workers who led selfish, pointless lives. But in truth, their stories have never been told. Now, Hallie Rubenhold uncovers the real lives of Polly, Annie, Elizabeth, Catherine and Mary-Jane and reveals how they came from a variety of backgrounds and geographical locations, including Fleet Street, Wolverhampton, Sweden and Wales. They wrote songs, owned coffee houses, lived on country estates and escaped the perils and demands of people-traffickers. They were mothers, sisters, daughters and wives whose only crimes were to fall prey to poverty and desperation.

Ever since the name of Jack the Ripper was first coined, that infamous being has reigned supreme in countless books, movies, documentaries and even tours of the murder sites. Concentrating on the grisly murders, everyone wants to know about the possible motives, the failings of the police investigation and the ever-growing list of possible suspects. It seems ridiculous that, until now, few historians have gone to the trouble of exploring the lives of the five women who made the Ripper famous.

Hallie Rubenhold has a gift for meticulous research and in this fascinating account, she brings to life the real women whose lives ended between August and November 1888. The author’s circumspect approach brings the women and the era alive and highlights that it was not prostitution but poverty, alcohol and tragedy that led them to their sudden and unwarranted deaths.

A provocative and thoroughly absorbing book.

I was really excited for this book as I'd wanted to read it for ages.

I'm sad to say the narration just didn't do it for me. I found it very difficult to engage with even when I slowed it down. I found it runs away with you and you really have to concentrate to get what is being said.

Maybe I'll give it another go as I really wanted to read it.

Jack the Ripper's victims are often dismissed as 'just prostitutes' as though the killer had done society a favour by disposing of them. But the first four victims, were not prostitutes at all, just destitute, homeless women with sad life stories, who were murdered while they were sleeping rough. The fifth woman had worked as a prostitute but does that mean she deserved what she got? The mystery and mythology surrounding Jack the Ripper has made him into an increasingly heroic figure, while reducing the women he murdered into disposable objects of shame. In 'The Five', Hallie Rubenhold tells their stories in an attempt to reclaim the narrative.

This is a devastating read - firstly for the incredibly difficult lives these women led in Victorian London, where poverty was considered a moral failing, but even more so for the victim-blaming narrative perpetuated by the newspapers and still prevalent today in the media, in courtrooms and government, that suggests that sexual violence against a woman is somehow invited by the way she dresses, the places she goes, or how much she's had to drink. An important book.

A brilliant book, excellently narrated. A compelling and utterly moreish telling of the lives of five very different but equally tragic women whilst giving to credence to the evil that cut their stories short. I could not stop listening and highly recommend, it is not only a gripping insight to Victorian life but also feminist history.

An incredible and long overdue telling of these women we only know as victims. At times I wanted to walk away from this book, so tragic are the stories. I’m so glad I didn’t.

I enjoyed the narration and the perspective from the victims point of view . It was difficult days for women on all levels . Thank goodness women’s rights have progressed with time z

Hours listening to someone read what they found off the internet. it was painful and I tried hard to follow along but I gave up. waste of $$

Great book does not do this important work justice. Should be compulsory reading for everyone.

I cried at the traffic lights

Listened to this book on way to and from work...and (without giving a spoiler) it made other motorists think I was weird when one woman said her name was 'nothing' and I burst into tears. It's a completely new perspective. These five were not weak victims like the Ripper myths paint. They were strong survivors of a time when women had few choices and unimaginable hardships. We only know them as the dead, and this author brings each of them to life in masterful, moving, beautifully written and impeccably researched accounts.

A beautifully written tale of the forgotten women

Loved this book and the narrator. Beautifully written, at times heart-wrenching. A well researched look into the canonical five victims of Jack the Ripper and their backgrounds, dispelling the myth that they were “just prostitutes”. Recommend.

Bringing justice to The Five

I was absolutely hooked from the moment I started this book and it was fascinating to hear so much detailed research into the lives of the five canonical victims of JTR.

As well as giving a well documented snapshot into late Victorian London and the lives of the women who inhabited its working class, it challenges the reader to re-evaluate what you had assumed from the stories, Wikipedia or other media that labelled Polly, Annie, Elizabeth, Catherine and Mary Jane as “prostitutes” and gives them a chance to reclaim the dignity that was so brutally taken from them 130yrs ago.

The reader is well paced and lively. She is engaging and well-suited to the subject-matter of the book.

Wonderful writing. Atmospheric and to an element, nostalgic.
Rating 3 stars for performance as after 6 hours the narrative skipped the first words from sentences. Still able to listen but spoiled the flow

Superb writing...deeply moving....should be a set book in every school. The narrator has the perfect tone of voice for this work.

Have listened to this book twice and enjoyed it immensely both times. Thoroughly researched and highly detailed, delivered in a captivating narrative.

Really enjoyed hearing about the detailed lives of women from this era. Great for the family historian who wonders about her female ancestors from this era. I like that it’s not the posh Pride & Prejudice types but the poorer working classes. Gives great insight into how difficult a woman’s life was back then and how quickly their circumstances could shift.