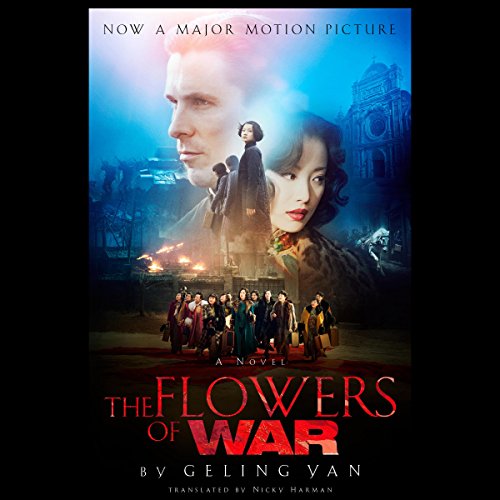 Here is the powerful Chinese novel about love and war on which Zhang Yimou (Raise the Red Lantern; Crouching Tiger, Hidden Dragon) has based his latest film, starring Christian Bale, to be released in 2012.

This moving short novel is based on true events that took place during the Nanjing Massacre in 1937, when the Japanese invaded the Chinese city, slaughtering not only soldiers but raping and murdering the civilian population as well. It tells the story of an American missionary who, for a few terrifying days, finds himself sheltering a group of schoolgirls, prostitutes, and wounded Chinese soldiers in the compound of his church.

American priest Father Engelmann is one of the small group of Westerners who have remained in Nanjing, despite the approach of the Japanese. America is not yet in the war and so his church compound is supposedly neutral territory. However, his confidence in his ability to look after the Chinese schoolgirls left in his care is shaken when 13 prostitutes from the floating brothel on the nearby Yangtze River climb over the compound wall and demand to be hidden. The situation becomes even more intense when some wounded Chinese soldiers appear.

Meanwhile, Engelmann is becoming increasingly aware of the barbaric behaviour of the Japanese outside the compound walls. It is only a matter of time before they knock on the door and find the people he is protecting.

Like Irène Némirovsky's Suite Française, this poignant audiobook looks at the effect upon individuals of large-scale war and tragedy. The characters are beautifully observed. From the naive schoolgirls, the brazen prostitutes, and the frightened soldiers to the slightly priggish priest and his resentful Chinese entourage. As the Japanese circle ever closer, the barriers of hatred and prejudice that separate the characters dissolve, and they perform unexpected and moving acts of heroism.

Geling Yan, an important Chinese writer, reveals herself to be a master of detail and emotion in this novel. She recreates history as if it is unfolding before our eyes, and writes characters that are so engaging and so rich that we believe in them entirely. This is a novel full of humanity - at its worst and at its best - and a fascinating insight into 1930s China.

What listeners say about The Flowers of War

The flowers of war

Possible, in my humble opinion only, one of the best books I have ever read.

Well Worth Remembering and Reading

What did you love best about The Flowers of War?

The story skirts around the worst of the atrocities of the Rape of Nanking yet while making only glancing note of the western heroes of the event like John Rabe and Minnie Vautrin, it captures the essence of fear and terror in the Chinese people who had to cope with out of control Japanese soldiers.

Zhang Yimou is noted as a director who can convey visually the essence of Chineseness to a western audience. Yet the novel is a much more compelling narrative than the film made by ZY.

Which character – as performed by Samantha Quan – was your favorite?

Undoubtedly Yu Mo for her essential humanity and her ability to reconcile conflicting interests, her own as well as others.

Who was the most memorable character of The Flowers of War and why?

This is a fictional narrative based on the true events of the notorious Nanking Massacre, a blot and shame on Japan which it has never come to terms with, and an all but forgotten historical event. The pity is that it will be read by very few and that the inferior film will be seen also by few, but many compared to readership of the book. Anyone who bears witness to horrors that have unfolded in Asia, the Bengali (1943) and North Vietnamese (1945) famines, Nanking (1937) The Cambodian Killing Fields (1975-1979) and the strufggle for freedom in Burma, led by Aung-San Suu Kyi, should read this, and hopefully then some or the more detailed studies such as Iris Chang's study of the Nanking Massacre, Elizabeth's Becker's When the War Was Over. Flowers of War is only a good beginning and if it doesn't whet your thirst for more information about this horrible event, read it again.

Unrealistic, over-romanticised, sugary slush. Really tedious. Everyone, apart from the baddies behaves chastly and honourably. And the tarts turn out to have noble hearts of gold.