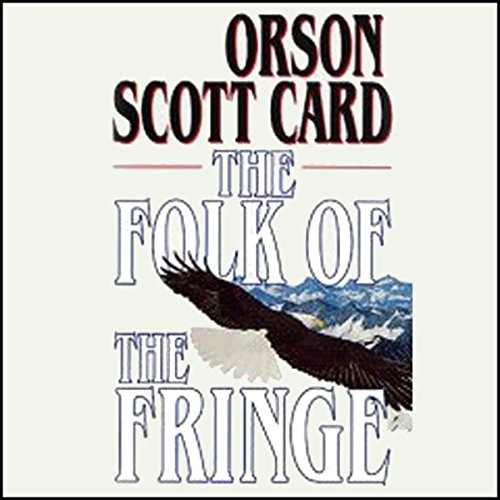 The Folk of the Fringe

Only a few nuclear weapons fell. But in the chaos of famine and plague, there existed a few pockets of order. The strongest of them was the state of Deseret. The climate has changed, and the lake has filled up. There, on the fringes, brave, hardworking pioneers are making the desert bloom again.
©1990 Orson Scott Card (P)2006 Audible Inc.

"This is one of the strongest SF story collections of the past few years." (Publishers Weekly)

I have ready most of Orson Card's books and am a huge fan. This book is very captivating and is great with character development as well as awesome narration. The only down side is that it is a collection of short stories centered around a main theme and I found myself wishing a few of the stories were longer. This is no Ender's Game...but if you like Card then this is a must read!

Classic Card. This is another set of short stories taking place in a possible future US. I can see how this would be more enjoyable to someone who is familiar with the LDS (Mormon) culture, but I don't think is is prerequisite. I found it entertaining, funny, and thought provoking as I do most of Cards works. I enjoyed the afterword almost as much as the stories themselves. Keep them coming.

I loved the Ender series and was buying everything Orson wrote. However, there are now several books, and this is one, that unless you are a Mormon you will find infantile. Avoid.

I expected enjoyable post-apocalyptic sci-fi but got an indoctrination into the theology and world view of the Latter-day Saints. After a plague has decimated the population of North America, "Christian soldiers" (non-LDS) run amok, killing LDS men, women, and children. I guess initiates may enjoy it, but I didn't make it past the first section.

Would you listen to The Folk of the Fringe again? Why?

Yes, I would listen to it again. It's a believable/realistic book to listen to, which makes you think; and something I can play for my family when we drive cross country. It's a little more "safe"; a quality very rare in sci-fi. It still has very mature material that you will have to stop and talk through with your kids, but it's presented in an old school "John Wayne western" manor (bad things happen, but we are not drug through the gore or nudity of it all; if that makes sense).

Because it seems realistic it is not aggravating the first or second time through, unlike other books. Sometimes I listen to books and think "What! Why are they doing that!!! I wouldn't react like that!!!" or "Oh, OK. So the police just happen to be there, right then. How convenient for the author." and it seems fake.

Take into consideration the current fad novel, "You want to take my kid and put them in an arena to fight other kids to the death?!?! Hell NO! ATTACK that silly lady with the microphone..." And that would be that; I would be dead, or revolution would take place, no more story to write about. (It took a LOT of disconnecting myself to get into that particular story (you know which one I'm talking about). Some things are worth dying for, and sometimes it's better to make a stand, than outlive your kids. NO parent wants to outlive their children! How dumb! Grrr!"

THIS BOOK DOES NOT DO THAT! Its a lot more realistic!

I'm Mormon, and when the characters made accurate reference to the Mormon culture it drew me in and sent chills down my spine. "How THRILLING!" I thought. Someone else said it was not "preachy" of the Mormon religion. I agree. Most references were about the culture, rather then the belief, and in the book it was viewed as acceptable to not be Mormon. Additionally, their was heroic and villainous acts on both sides of the 'member/nonmember' fence.

PLEASE DO NOT MAKE THIS BOOK INTO A MOVIE! Don't make changes like when Ender did NOT break the other kids arm in the shuttle, or when the snake was killed by Harry in the movie, but Neval in the book. Neval killing the snake was much MUCH "cooler".

Orson Scott Card = Great author. With that in mind prepare yourself for long conversations between the characters, and a significant amount of time spent by the characters mole-ing over ideas, in his books.

There was a time before the end of the Cold War when post-nuclear holocaust books were everywhere. How humanity and civilization moved on after the bomb was a big subject in fantasy writing. Muties and bands of pirate robbers and cannibals abounded through fiction. This book took that subject matter, which was once so popular, and twisted it to fit the point of view of the persecuted Mormon people. In the beginning of the book the Baptists of Greensboro massacred the Mormons of Greensboro and survivors were forced to move to Utah were law and order still presided. Interesting enough. It would be awfully offensive subject matter if you were a Baptists or an "Evangelical Christian". I wonder if the Greensboro Baptist did anything to the Greensboro Catholics or the Greensboro Jehovah's Witnesses. There are Christian Sects that exists that the Baptist find more offensive than the Mormons. Mr. Card didn't mention any of these. I do think that if there were six bombs dropped and civilization crumbled soon after there would be a lot more racial tension in the Southeast U.S. than the author believed to be the case. It's funny to me that the author thinks the Mormons would be persecuted 20 years ago, but just two years ago the Republicans almost had a Mormon candidate for President. Of course, it was the far right block of Christian Conservative Republicans who threw their weight behind McCain, but if McCain hadn't been there it could have very well been Romney who received the nomination. Obviously, the Mormons aren't as objectionable in the American mainstream as the author would like to believe. They're not exactly persecuted or outcast in America. To me they seem to be a wealthy, highly educated, well-mannered, if not slightly brainwashed group of people. But they are not objectionable as a religious group. I would at least place them above the Muslims as far as religious likability goes. But this subject explored in length in this book makes it interes

A tale of post-apocalyptic America, that has some interesting characters and ideas and is well told through a set of short stories. Sometimes, it seemed, the stories did not connect very well. It's told in a Mormon context and pretty much tells the tale of "local" America--stressed. Although the apocalypse was nuclear, we saw no effects. All in all, a pretty darn average Mormon fantasy.

Not my favorite from this writer...

I didn't realize when I started listening, that this was a compilation of several short stories. I did enjoy the read, but it was sometimes difficult to keep up with the way it jumped from one to another. Not a bad book, just not one of my favorites, as I said.

Would you listen to Folk of the Fringe again? Why?

no, i don't usually

development of the main story line and how the seemingly random events were actually a timeline of development.

no, but it was enjoyable and thought provoking.

A collection of short stories detailing life after some kind of disaster, an atomic bomb or third world war. The Mormon religion is significant in each story, but it doesn't dominate or preach values, instead flows along with the narrative.

The worst. Didn't expect something so bad from this author. We couldn't finish listening to the collection of stories.