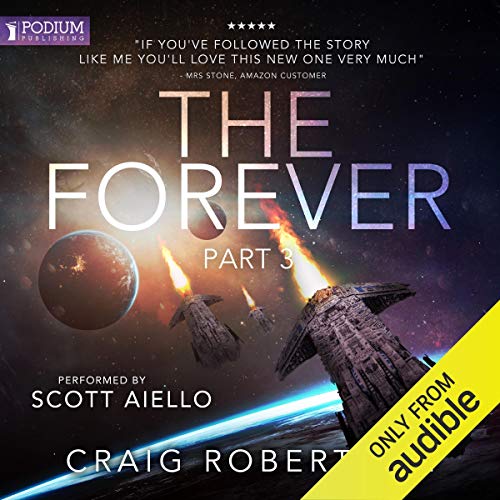 There is hope. But first you must find it.

As a horrific war with the ruthless Berrillians heats up, a new, more deadly threat arises - a mythical race known as the Last Nightmare, intent on destroying the universe. Once more, fate calls upon Jon Ryan.

An alliance is made between old friends and bitter enemies. Cooperation is the only thing that might just save them all.

But all the fighting, all the death, and all the suffering are changing Jon. With each passing crisis, his humanity ebbs further and further away.

Can Jon pull one more miracle out of his hat? Is the cost of survival worth his soul?

Honestly, this one of the best narrated series I have ever heard on Audible. The story was good and to finish it is like staying good bye to an old friend. Scott brought this world to life with his pace, the accents and the individuality he brings to these characters was incredible. Hats off to Craig Robertson for a unique and funny story but Scott Aiello really brought it to life.

it kinda ends out of nowhere.

it kinda ends out of nowhere. I love these books. I just wish the ending didnt feel so abrupt and impersonal.

The story is truly epic and is a great continuation of the series. Scott Aiello has done such a great job bringing these characters to life. This is worth a listen if you have been following the adventures so far.

The weakest installment in the series, but still good!

This was the most campy book in the series. The ending was okay, if a bit disappointing. It felt very anticlimactic. I did very much enjoy the series but can’t give this book quite as high of a rating as the first two. It simply was not as well thought out or engaging. Each challenge presented no real challenge other than talking in circles, and coincidence seemed to be used to unfair extremes. It’s a tough balance to write sci-fi that is “believable” and again, the first two books just did it better, setting a high bar. Overall a decent end to an otherwise great series.

I started this series thinking it was going to be another non-ending series but found instead an exciting and humorous book with a beginning and a good ending.

story is ok but I feel like the author kills off the main villain way to fast. Super hero John Ryan never gets to meet his Lex luther, joker, or frieza... As soon as the villain gets to momentum going John kills him easily enough. With that being said the other aspects of the story are pretty good.

You need this series

This is probably one of the best books I have ever heard. The entire series is fantastic. The narration sells the entire experience. Highly recommended.

The conclusion is not believable

A great series of books but the ending is not believable. I loved the story and without giving any spoilers, found the storyline consistent till the final chapter where one of the main characters does something that does not hold water with the rest of their character in the previous three books. For that reason, I'm giving the story only a 4-star rating.

it's great as long as you don't listen to the end

just don't listen to the last chapter. It made no sense in the context of the story and was completely out of character.

Well worth the money

I love all of Craig's stories that take place in the Ryanverse and Scott is one of the best narrators I have had the pleasure of listening to. The story is entertaining and evokes a vast range of emotional responses. There are a few things that could use improvement in my opinion, but it is well worth the time to listen. It's funny, exciting, and will make you think at times.

Is there more in thus saga?! Hope so as I'm really enjoying John Ryan's adventures!

cracking series well worth listening to

all three books kept me hooked to the end!. humerous and gripping. a trully enjoyable trilogy.

Best sci fi I have listened to in ages!

Epic! Loved it.. Aliens spaceships with great pace and story! A proper ending too... brilliant!

Jon personality really started to grate on me in this one, and the Berrillian story didn't make much sense or did it feel like they should of ever been a problem. The Last Nightmare was better but it was still just average. It would have probably been better if the timeline of the two events where switched around.

ok, may not win any awards but i like my space yarns while jogging and this was great, yes some similar notes to our friend at Special ops ex force and the merry band of pirates. If you like Deadpool then you will love John Ryan.

Jon is the ultimate Mary Sue - he can do everything. Nothing is is a challenge. The Last Nightmare were such an interesting concept and you could be fooled into believing it is all high stakes - it isn't - if anything they take less effort than anything that came before.

Jon is one of the most badly written characters I've ever had the misfortune of wasting time on in this book. Hes amazing at everything (ultimate fighter pilot, lover, witty, scientist and everything else), every line he utters is a banal attempt at humor and everyone (and I mean everyone in ever other sentence) will call him impossible (if you removed other characters discussion of his so called wit you could shave the book down by a long way).

So many decisions made make no sense. The romance is just bad. The worst sin though? Nothing matters - tries to sell you high stakes and ultimately nothing happens. All build up for what amounts to 'oh let's just end that threat' - nothing else, just end.

It also skips over the chance to delve into his immortality and I refuse to spoil the end - but it a fit ending - nothing mattered.

The final chatter in the saga of John Ryan..

More intergalactic mayhem as the laconic mandroid fights the Black Hats of the Galaxy with his usual brand of humour and genius..

This book is a must for everyone. It has ‘twists and turns ‘ and is very exhilarating.

the story goes on. then stops

the performance of this book is the most outstanding part of it.
still, it has enough twists to keep the interest and mind ticking.
and I would recommend you to listen. the humanity of everyone is a deep point to take away and think about.

loved most of the books, there were inevitable dragging chapters but overall it was epic. funny and insightful.

Enjoyed the premise, even if it seems a tak off of the "Bobs" Series. However, things were flowing well through the series til the end. It really felt like the author said "well, my deadline is tomorrow, so I better wrap this up in one paragraph.". Very disappointing

My chapters are out of their order!