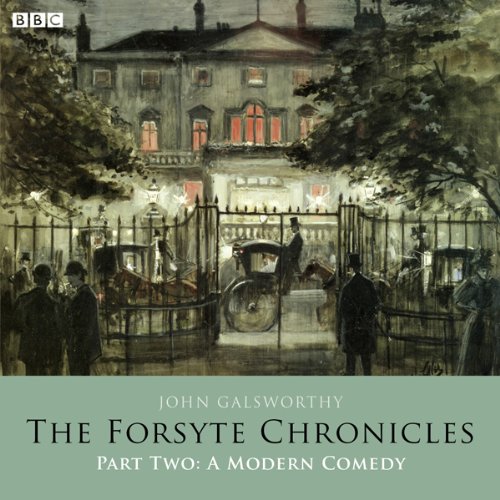 A Radio 4 dramatisation of John Galsworthy’s second absorbing trilogy about the lives and loves of the Forsytes, with a star cast including Amanda Redman, Gary Bond, and Belinda Lang.

A Modern Comedy is a gripping dramatisation of Galsworthy’s three classic books following the fortunes of the Forsytes throughout the Roaring Twenties.

The White Monkey starts with Fleur married to Michael Mont and playing the role of society wife but dissatisfied and unfulfilled. Her attempts to find happiness lead to trouble and she must turn to Soames for help....

The Silver Spoon centres around a controversial libel action that sees Fleur pitted against spiteful socialite Marjorie Ferrar. Soon her husband, Michael, and father Soames are also dragged into the damaging court case.

Swan Song sees lost loves reunited as Fleur and Jon meet after seven years apart. Their passion is reignited – but Jon is married and his wife, Anne, will not give up without a fight. Meanwhile, disaster strikes as Soames tries to save his beloved paintings from a fire….

What listeners say about The Forsyte Chronicles: Part Two: A Modern Comedy (Dramatised)