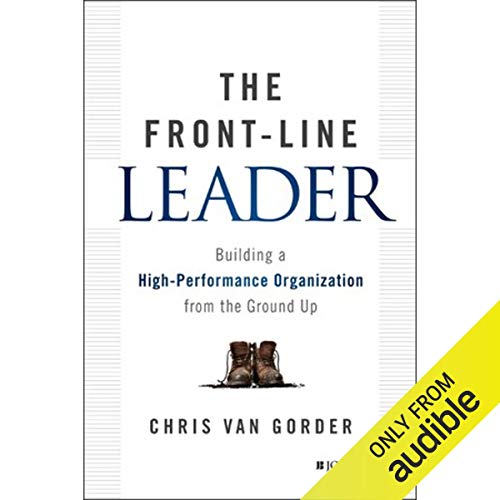 Real leadership that leads to high engagement, higher performance, and a culture of accountability.

As president and CEO of Scripps Health, one of America's most prestigious health systems, Chris Van Gorder presided over a dramatic turnaround, catapulting Scripps from near bankruptcy to a dominant market position. While hospitals and health systems nationwide have laid people off or are closing their doors, Scripps is financially healthy, has added thousands of employees (even with a no-layoff philosophy), and has developed a reputation as a top employer. What are the secrets to this remarkable story?

In The Front-Line Leader, Chris Van Gorder candidly shares his own incredible story, from police officer to CEO, and the leadership philosophy that drives all of his decisions and actions: people come first. Van Gorder began his unlikely career as a California police officer, which deeply instilled in him a sense of social responsibility, honesty, and public service. After being injured on the job and taking an early retirement, Van Gorder had to reinvent himself, taking a job as a hospital security director, a job that would change his life. Through hard work and determination, he rose to executive ranks, eventually becoming CEO of Scripps. But he never forgot his own roots and powerful work ethic, or the time when he was a security officer and a CEO would not make eye contact with him.

Van Gorder leads from the front lines, making it a priority to know his employees and customers at every level. His values learned on the force - protecting the community, educating citizens, developing caring relationships, and ultimately doing the right thing - shape his approach to business. As much as companies talk about accountability, managers seldom understand what practical steps to take to achieve an ethic of service that makes accountability meaningful.

Healthcare can learn much from the simple motto to serve and protect that Chris speaks about. His journey isn't perfect, but it creates thoughtful reflection of what if healthcare was became better within each organization from the inside out.

Fantastic book. Lots of takeaways and ideas for improvement that can be implemented immediately from this book.

I was riveted by the Mr. Van Gorder's journey in transforming Scripps into a world class healthcare system. Clearly is a leader who cares and recognizes who "runs" the organization...loved it!