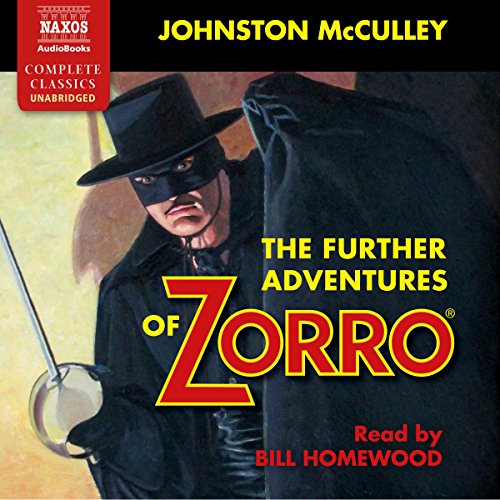 The Further Adventures of Zorro

The swashbuckling sequel to The Mark of Zorro (The Curse of Capistrano), The Further Adventures of Zorro sees the daring hero out for revenge once more. After Captain Ramon kidnaps the beautiful Lolita Pulido, Zorro takes to the seas and battles pirates in a bid to win her back. Swordfights, death traps, and disastrously tight corners await him. But it is never much more than a challenge as the gallant caballero laughs in the face of danger - nothing can faze him.

Villainous villains, heroic heroes, and damsels in distress are all brought to life in full sonic splendor. A lively and inimitably colorful reading by the stage actor Bill Homewood, who is well accustomed to adventure stories, having previously recorded The Three Musketeers, She, and the Four Just Men series.

What listeners say about The Further Adventures of Zorro

Not a strong sequel

Definitely not as good as the original Zorro story. The sequel was a bit messy and all over the place. Situations seemed repetitive and several times Zorro did things that felt uncharacteristic. Overall I give the story 3.5 stars and would recommend fans of the character to read it.

Loved the Curse of Capistrano? Wondering if something called "The Further Adventures of Zorro" can live up?

Well, it depends on what you're after...

No, not this time.

Zorro stabbing his way through a crowd of pirates and nearly getting burned at the stake?

I, for one, LOVE this stuff and recommend it fully to anyone who enjoyed Curse.

McCulley Zorro is and will always be my One True Zorro.