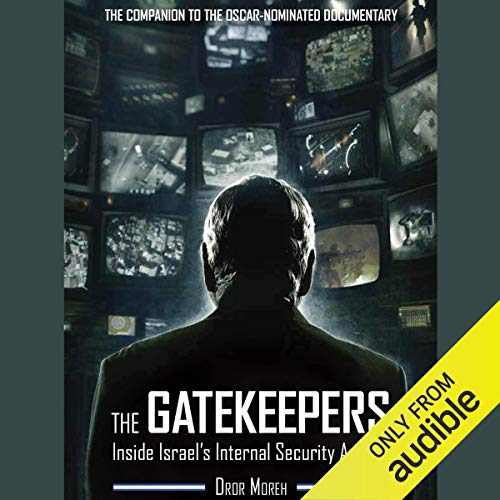 The companion to the Oscar-nominated documentary, an unparalleled look inside Israel's security establishment. Imagine the following situation: You have just received a tip that six suicide bombers are making their way into the heart of Israel's major cities, each one to a different city, to set off explosions in the most crowded centers of population. How far would you go to stop the attacks? How would you sleep at night if you failed and one of the six terrorists reached his target and murdered dozens of innocent people? What would you do the next morning to extract your country from this murderous vicious cycle?

For six former heads of the Shin Bet (Israel's internal security service), these were not hypothetical questions but the realities and tormenting way of life for decades. In The Gatekeepers, which is based on extensive and lengthy interviews conducted to produce the award-winning film of the same name, six former heads of the Shin Bet speak with unprecedented candor on how they handled the toughest and tensest moments of their lives; on matters of life and death; on the missions they were involved in; on the historic opportunities for a better future that were missed by the leaders under whom they served; and the scars each of them bears until this very day. The Gatekeepers is a piercing and cruel self-examination of Israel's security establishment and of a nation that has lived by its sword for so many years but has lost its faith in its ability to lay it down.

What listeners say about The Gatekeepers

The best narration i've yet heard. Perfection, tone, accent, personality...all in one narrator. Must listen.

I was excited to hear this since I have a strong interest in the topic but couldn’t endure the pain and confusion of listening to this. This “book” is apparently a direct adaption from something video. Therefore, there is no character development or introduction, just the random insertion of a name and some seeming disjointed rambling with no proper context.
Don’t expect it to have a noticeable story line or even make sense. It is definitely meant to me seen, not heard. Sort of like watching a sporting event with a blindfold on; you get the sense that something must be happening but can’t quite figure it out.
In summary - painful, painful, painful.

A subject I wanted to know more about and I have learned from listening to the book, but it was presented in an odd fashion - a series of interviews - and the narration was monotonous and did nothing to bring the key messages out.