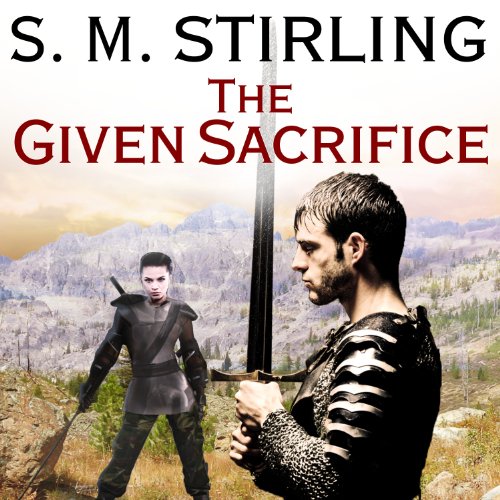 Rudi Mackenzie has won the battle that expelled the enemy from the new High Kingdom of Montival. Now he must free the people who live in the state once known as Idaho from occupation by the legions of the Church Universal and Triumphant and pursue them to their lair over the mountains. There he will finally confront the forces behind the Church - the Powers of the Void.

Yet even a victory will not end the conflict forever. The Powers of the Void are malevolent and infinitely patient, and the struggle is one that involves the entire world. They threaten Rudi not only in the present, but also in the future represented by his children, Orlaith and John. Rudi knows this.

And as his heir Princess Orlaith grows up in the shadow of her famous father, she also realizes that the enemy will do anything to see that she does not live to fulfill her parents' dream.

Proof there CAN be too Much of a Good Thing...

Overview:
I have followed this story from the Nantucket series forward, and I have loved nearly every minute of it. However, I must admit my dwindling enthusiasm since "Tears of the Sun," and my particular disappointment with this book. It actually pains me to give such a low rating to a story that I have been so in love with, but there does come a time when an author needs to call done, done, and avoid diminishing returns.

The Audiobook/Narration:
This has been the high point throughout all of the series: Todd McLaren has performed every book, which is a rare thing to find in a series with so many books - you almost always get at least one or two others to come in and, in my opinion, generally "upset the apple cart." Say what you will about some of the mispronunciations of words and places, but as a Scot myself, and one used to hearing the Gaelic, I can can tell you that even "native" speakers massacre a word here and there! But, he has been absolutely consistent in his vocal representations of every character, such that you don't need the "said Rudi," or "said Juniper," to alert you to whomever it is speaking. Not exactly an easy feat, what with a year or more between recordings! Hats off to Mr. McLaren.

"The Given Sacrifice:"
That said, I rate this book lowest of low in the series for a number of reasons. First, it is my opinion that "Tears of the Sun," Lord of Mountains," and "The Given Sacrifice" should all have been ONE book. In fact, all of them seem only designed to set the stage for the NEXT series, detailing the story of Generation III of 'The Change.' There is a sense of rushing and being incomplete in each of these last three books. We are introduced to characters, or are walking alongside characters we've known from the start, then suddenly there's a, "aaaaand...they're not important anymore, so moving on..." and "poof" - where did they go?

In this final iteration (thus far) we, in fact, get time warped from cradle to adulthood with those who will take center stage in the next part of the series, suddenly hearing about the deaths of characters we have know and loved (or loved to hate), or characters of the same esteem who have been shunted off north somewhere, or driven so far into the background that we know they will be cameos or less than cameos from here onward.

Here's the thing: we GREW UP with Rudi, with Mathilda, with Mary and Ritvah and the rest; we "knew" them from childhood to the crowing of the King and foundation of Montival. As such, we shared every triumph, every grief, and all the wonder that the characters did - we were invested in them.

SPOILER ALERT: At the end of this book, however much we have been prepared for Rudi's death, his daughter, her friends, and a good many others ride into the final battle, unblooded and nervous, but...who cares? We don't know them; have no investment in them; and to be honest, as we see only strangers taking the guise of people we have known and loved, there is an absolute feeling of let-down. Not simply because a beloved character has died, but because, once again, we get a sense of, "so THAT happened...aaaand moving on - forget all of those folks; here's the new folks - ta-da!"

Sorry, and I do submit that this is only one man's opinion, but things should have been wrapped up long before, and left with the gold old fashion "let the reader finish the future," for good or ill.

There simply is a time to say "when," and call something great good enough.

Love your writing Mr. Stirling, but with this one - nay, with "The High King of Montival," I'd say - enough was enough.

Great Ending To This Part Of The Saga

Would you consider the audio edition of The Given Sacrifice to be better than the print version?

TGS was probably the most satisfying of this series since The Sunrise Lands, probably even more so. I've enjoyed all of these books but at times parts of them-sometimes large parts-seemed to be more place-holding than moving the story along. At other times the whole thing seemed rushed, like the author was up against a deadline. S.M. Stirling is a very compelling writer however, and he has never been boring. I'm pretty sure anyone buying this book has read the entire series. If not, do so before you read this one. These are not stand alone books and I would imagine the frustration quotient from trying to figure out who is who and keep up with the storyline would be huge. Also, knowing virtually the entire life stories of the characters make them like old and comfortable friends. That being said, TGS wraps up this part of the saga very well, with enough plot twists to keep the reader entertained and anticipating more. Stirling is evidently writing a trilogy within a trilogy: Dies The Fire and its two sequels, The Sunrise Lands through this one, then at least two more, covering three generations. I can't wait till next September.

What disappointed you about The Given Sacrifice?

Never since "The Wheel of Time" series went off the rails have I been so disappointed in a series' conclusion. "Dies the Fire's" post apocalypse tale of sword, survival and intrigue has devolved into a maddeningly boring fashion magazine meets architectural digest with plot progression tacked on after the fact. Worse even than "The Lord of the Mountains", the plot for "The Given Sacrifice" grinds to a predictable halt 3/4 of the way through the novel into the world's most boring denouement.
Given the prior efforts in this series, I wouldn't have listened to this book if it wasn't the last of the series. Having done so, I'm certain that this particular sacrifice of my time and money was too much to ask.

Would you ever listen to anything by S. M. Stirling again?

Would you consider the audio edition of The Given Sacrifice to be better than the print version?

Have not read the print version

What other book might you compare The Given Sacrifice to and why?

I can think of no books that compare to this series.

Which character – as performed by Todd McLaren – was your favorite?

Rudi McKenzie, the bear-killers and the evil CUT villans

An adventure through time

I have listened and enjoyed all the books in this series. The author and narrator keep you glued to the story. The characters make you really care about them. I also like the Celtic overtones.

If you liked the other books you will like this one. All of the children are growing up, and taking there places in the world, and with that they are about to get there own set of problems. The story continues..... Yeah!! Worth your time cash/credit.

What was most disappointing about S. M. Stirling’s story?

This started out with the same pacing and characterization that are a hall mark of this series. Sadly, part way thru the author seemed to be rushing through the events to get to the end of the events this story was to be the climax for. The last section seems to be the setup for a future series.

SM Sterling does it again .

completely loved the book narrator does it again so does Sterling captivating and edge of your seat and very Medieval accurate.

It was a good read, continued the story line and was a fun read. It was also a good transition to the next generation.

Maybe I've just read too many of these books now. Anyone who has read this far in the series ñb

What disappointed you about The Given Sacrifice?

The poor audio quality of the recording itself, possibly compounded by the author's tendency to soften his voice mimicking the lilting Gaelic accent of the main protagonist. I bailed out in frustration after about an hour.

never got that far

Who would you have cast as narrator instead of Todd McLaren?

Wait for the last quarter.

For a book series going into double digits it's surprising how accessible this book is for new comings. For those of us coming to it as book 10 of the Emberverse there is something very predictable it about the direction of the story, don't expect any surprises in the first 3/4 but that doesn't distract from the great characters and world development wrapped inside the excellent writing.
The last quarter however is a different 'story', everything is taken to a new level opening the world up to interesting and unexpected direction, and it's worth the wait for both new comers and veterans of the series.