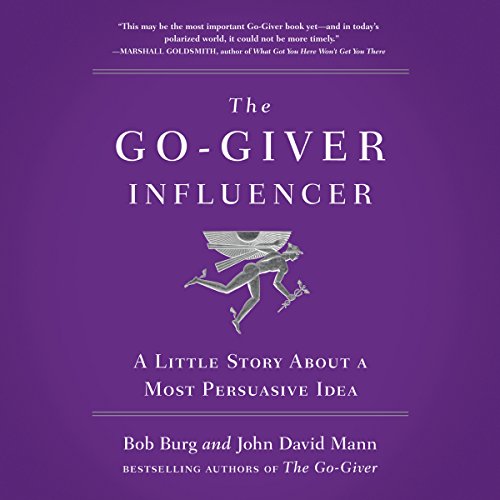 From the best-selling authors of The Go-Giver, Go-Givers Sell More, and The Go-Giver Leader comes another compelling parable about the paradox of getting ahead by placing other people's interests first.

The Go-Giver Influencer is a story about two young, ambitious businesspeople: Gillian Waters, the chief buyer for Smith & Banks, a midsize company that operates a national chain of pet accessory stores; and Jackson Hill, the founder of Angels Clothed in Fur, a small but growing manufacturer of all-natural pet foods. Each has something the other wants.

To Jackson, Smith & Banks represents the possibility of reaching more animals with his products - if he can negotiate terms and conditions that will protect his company's integrity. To Gillian, Angels Clothed in Fur could give her company a distinctive, uniquely high-quality line that will help them stand out from their competitors - if Angels Clothed in Fur can be persuaded to give them an exclusive.

At first, the negotiations are adversarial and frustrating. Then, coincidentally, Gillian and Jackson each encounter a mysterious yet kindly mentor. Over the next week, while neither one realizes the other is doing the same, both Gillian and Jackson learn the heart of both mentors' philosophies: The Five Secrets of Genuine Influence.

The story ends in a way that surprises everyone - and with lessons we can all apply in our efforts to resolve conflicts and influence others.

“This may be the most important Go-Giver book yet - and in today’s polarized world, it could not be more timely.” (Marshall Goldsmith, author of What Got You Here Won’t Get You There)

“The Go-Giver Influencer is a brilliant and insightful book that teaches us how to see things from the other person’s point of view and add value to their life while honoring our own. Remarkable!” (Ken Blanchard, coauthor of The New One Minute Manager and Raving Fans)

“As with The Go-Giver, I was sucked in and touched from the first page. This book is such a wonderful guide for those who truly care about adding value to the world! I had tears in my eyes at the end - and came away equipped with five powerful keys to being a more effective influencer.” (Tiffany Hendra, star of The Real Housewives of Dallas)

What listeners say about The Go-Giver Influencer

Good book but felt something Missing

Not what i expected to be honest. I wanted to know how exactly influence works. What are the pitfalls. Book gave idea or steps to create influence but still felt something I'd lacking.

Good but not great

It has very good content and the final 'chapter' is an excellent part of the book since it summarizes everything in an organized manner. The allegory is good but overall I do not believe this matches the first book of the series which was excellent.

Please understand, the takeaways are very good but it seems the story isn't 'believable' reducing the impact and effectiveness of the lessons. I walk a few miles nearly every day and this was one of the 'listens'. A PDF of the points and outline would have made this a solid 4.

This book demonstrates valuable principles that can apply to any relationship brought, through an interesting and captivating real-life like scenario.

I loved the book and the lessons about influence. I just wish it was longer.

this is an excellent book and will give people and approach of how to create winning solutions for all parties. Influence a negotiation , as stated in the book have some negative connotations, this book brings out the positive, and how to use it..

I love the Go-Giver books, Thank you so much for the life and business lessons.

it was so and so

it was so and so. good story with good principles
it's not a wow book

This is a really great story. Do yourself a favor and read it for yourself!

This book does a great job on breaking down the importance of influence and how to achieve it. I highly recommend this book for those who need help or polishing in this area of life.

Great lessons in an easy to follow story line

So many of the growth and self-help type books are written from such a high-level birds eye view with often little reference to realistic situations, and that makes them sometimes hard to really grasp and use - this is not one of those books. Instead, the authors put you on a journey behind the scenes of several people whose lives all cross in interesting ways. You see realistic situations from the perspective of both sides, and get a little glimpse into how those in a negotatiation may be thinking. More importantly, you learn how and why to proceed into a situation with honesty, integrity, humility and empathy. Sometimes the solution to a problem is not even one of the scenarios you envisioned at all - sometimes the answer is something completely different (and better!) than you ever thought possible. Perhaps the story is too idealistic - but regardless I enjoyed it thoroughly and since this is the first of the Go Giver books that I've read, I'll now be going back to read the first two!

loved it. the only issue I had was the one person's voice goes very quiet so I have turn up the volume super loud sometimes and then the next thing he says sounds like hes screaming super loud. can you please try to keep your voice the same volume ish for us audio listeners. thanks

loved it, driving to & from work I get great inspiration from all the sayings.