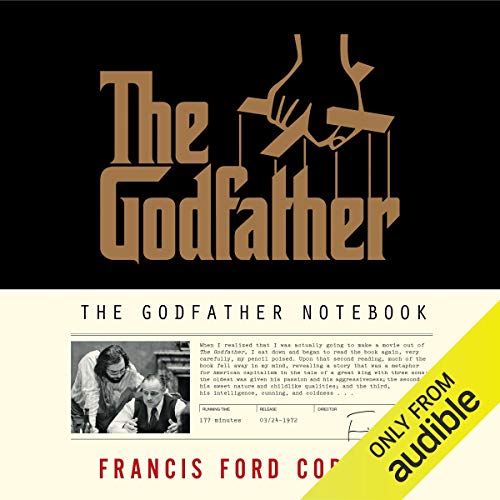 The publishing sensation of the year for every film fan

The never-before-published edition of Francis Ford Coppola's notes and annotations on The Godfather novel by Mario Puzo reveals the story behind one of the world's most iconic films. In this one-of-a-kind audio production, Coppola provides listeners with unfiltered access to his creative process in his own voice. Featuring notes from eight scenes - handpicked by Coppola himself - The Godfather Notebook is a must-listen for fans of the 1972 film.

The most important unpublished work on one of the greatest films of all time, written before filming by the man who wrote and directed it - Francis Ford Coppola, then only 32 years old - The Godfather Notebook reveals the intense creative process that went into making this seminal film. With his meticulous notes and impressions of Mario Puzo's novel, the notebook was referred to by Coppola daily on set while he directed the movie. The Godfather Notebook pulls back the curtain on the legendary filmmaker and the film that launched his illustrious career. Complete with an introduction by Coppola, this is a unique, beautiful, and faithful reproduction of his original notebook.

This publication will change the way the world views the iconic film - and the process of filmmaking at large. A must-have book of the season. Nothing like it has ever been published before.

What listeners say about The Godfather Notebook

Pleasurable peek into the scriptwriting process

This short book by Coppola is about the writing of the script for the first Godfather movie. It stops short of the actual making of the film.

That's because, as Coppola tells us in the fascinating introduction, this nonfiction title is based on a notebook he created prior to writing the script. In the notebook, he divided the book by Mario Puzo into scenes. Then for each scene, he wrote down the core of that scene. What is this scene really about? He also looked at images that would be important to that scene and possible pitfalls to be aware of as writer/director. For example, not building up the happy mood that follows Don Corleone's homecoming from the hospital to contrast with the ensuing bad news about youngest son Michael.

Coppola reads the meaty introduction, detailing his history with the project and the script writing process, and then dictates a smattering of entries from his Godfather Notebook. Then Joe Mantegna comes in to read the dramatized rendering of the entry.

Mantegna, by the way, narrates a version of Puzo's The Godfather on Audible. Also on Audible, you can find an essay Puzo wrote in 1972 about the writing of The Godfather, the book's adaptation to film and his uncomfortable encounter with Frank Sinatra.

It says unabridged but really just a snippet

Would you be willing to try another book from Francis Ford Coppola? Why or why not?

Yes. He is one of the greats and The Godfather alone makes him a great director.

What about Francis Ford Coppola and Joe Mantegna ’s performance did you like?

Coppola OK. Mantegna has a great voice and is a professional unlike Coppola.

Did The Godfather Notebook inspire you to do anything?

It inspired me to buy the whole book.

what was included was excellent. However the exclusion of the films most important scene is extremely disappointing.

Good but way to short

I really enjoyed this book, What there is of it. This is way to short for the price.

Some interesting notes, but half is recycled

very few behind the scenes notes, and the ones Coppola gives you are surface deep and not terribly interesting. Half the book is Coppola reading the description of a scene, then the other half is recycling a clip of the same scene from The Godfather audio book read by Joe Mantegna. Honestly, it's not worth buying.

My only complaint is I wish it was longer

This books is about the process Coppola used in adapting Mario Puzo’s book into one of the best movies of all time. The physical book is, to a large extent, a picture book with set photos and photos of Coppola’s handwritten notes supplementing the text. Accordingly, this is just over an hour long, which is short for an audiobook. Still, I don’t regret spending an Audible credit on it: Coppola’s an excellent storyteller, and Joe Mantegna reading, for contrast, the completed script of scenes we’ve heard Coppola’s notes on, is amazing.

Interesting. Only Get it When Cheap

Was a pleasant hour. Starts off strong but peters out in an anticlimax. Just stick with the audiobook of The Godfather for maximum value.

Loved the book learning about Francis's trials and tribulations in making the movie was great. I loved joe's reading every scene was amazing. A very good book

Teaches You The Battles To Get A Film Made

FFC walks you through, in his own voice, the steps it took to get the classic film made, from his own diary.

A good history and tech lesson for film makers.

A notebook you can't refuse.

Would you consider the audio edition of The Godfather Notebook to be better than the print version?

Of all the characters I like in the book, the one that stands out is Michael, because his character develops throughout the book.

My favorite scene was the scene in which Michael shoots the cop, and Salotzo.

I did. I wanted to hear what Coppola took from the book, and what he decided to change or totally ignore.

If you have scene the film, and want to listen to this note book for background information, I would also suggest that you purchase the godfather book, since you can hear portions in the notebook.