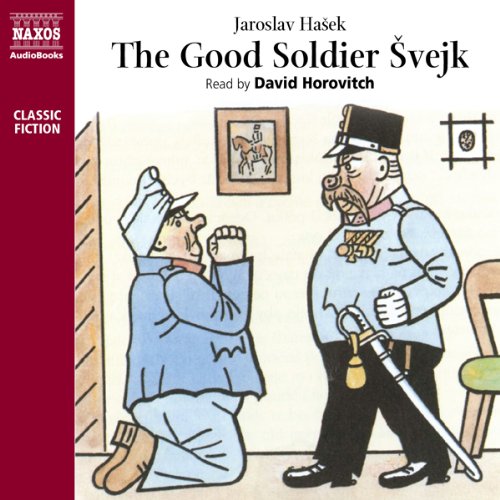 Jaroslav Hasek's world-famous satirical farce The Good Soldier Svejk has been translated into over 60 languages, and is one of the best-known Czech works ever published.

A soldier in the First World War who never actually sees any combat, Josef Å vejk is the awkward protagonist - and none of the other characters can quite decide whether his bumbling efforts to get to the front are genuine or not. Often portrayed as one of the first anti-war novels, Hasek's classic satire is a tour-de-force of modernist writing, influencing later writers such as Hemingway, Faulkner and Joseph Heller.

What listeners say about The Good Soldier Svejk

Brilliant narration.
Good book.
Would like it better in unabridged version.

If you need a good laugh

What did you love best about The Good Soldier Svejk?

Svejk is the embodiment of Czech passive resistance to foreign domination, in this case Austro-Hungarian, and later, Russian Bolsheviks. Sometimes it's hard to tell whether he's really a "patent idiot" as he proudly proclaims, or a conniving saboteur who can wreck the simplest orders with creative application of cheerful obedience coupled with elastic morality.

But Svejk the idiot seems positively sensible when confronted with the Imperial war machine, which even without Svejk's help manages to sabotage its own greatness through equally imbecilic acts of obedience.

If you're feeling a bit oppressed by some misbegotten authority or asinine bureacracy, this book is for you. The Czechs have mastered the art of patient suffering, so the book is surprisingly lighthearted given the weight of its content. You'll feel a lot better afterwards.

What was one of the most memorable moments of The Good Soldier Svejk?

Svejk helpfully offers to haul a load of books from brigade office and deliver them to the staff. When the train is called to leave midway through the task, Svejk commits a blunder so serious that even he is not authorized to know what he has done.

Who was the most memorable character of The Good Soldier Svejk and why?

Svejk of course is the centerpiece of the novel. Second after that is probably poor Lieutenant Lukaš, a career officer and lothario who fails on numerous occasions to rid himself of Svejk.

The audiobook is "abridged" from the original without serious loss. There is a certain amount of ribald activity and some really eloquent cursing (how many ways are there to call a soldier a "bastard"?), delivered in a British comedic style that would be at home in a Monty Python.

Can't give story 5 stars because this is abridged which means you can't read along while listening because some parts are snipped. Otherwise this was great listenin.

Svejk would be an awesome person to meet in real life. I actually laughed out loud at least once hearing about one of his mishaps. The performance is brilliant and the characters felt animated.

This was recommended during a lecture in TGC: World War I: The Great War.

I thoroughly enjoyed this one. The reader is terrific! I will look for his other work. Jaroslav Hasek's comic masterpiece, despite (unwelcome) abridgment, and the fact that the original novel was unfinished, is still an absolute delight from the very first paragraph.

excellent narratiion of a brilliant book,

if you have a knack for satire, well this is one of the best pieces you will ever Come across. The narration is extraordinary.

lives up to its reputation

I had been wanting to read this book for decades. Ever page is rich with humor, absurdism, and biting sarcasm with regard to war, modern life, and bureaucracy. In its genre, I have not read a better book.

I know this is only one translation and I've read that there is another that is supposed to be better. I have only this to go on and I loved it. Hasek wrote more tales of <i>The Good Soldier Svejk</i>, but since his adventures appear to go on and on, I started with his first, shorter book, which gave me a good introduction.

One of a kind satire

David Horovitch has done an extraordinary job of narration, adapting his voice for the various characters. I first read Schweik more than 50 years ago and found the audio version a wonderful reminder and delight at this rare satire.

This is a social commentary and uses humour and satire to make political points. It is well narrated and the story is entertaining. Not my favourite book but interesting.

It is one of the best comedy books ever written.

The narration is fantastic and not to be missed the different characters come to life with David’s different voices.
The stories are entertaining and funny, well worth the time of this lighthearted classic of the war.
You never know if Svejk is an idiot or knows all the time what is going on and just trying to mess things up.
I found this book very entertaining.

Do take time to listen to even this abridged version of one of the 20th century's most humerous and iconoclastic novels detailing the adventures of a hapless, bumbling characters ( or is he? judge for yourself ! ) in the First World War. I can't remember a more scathing satire of the lunacy of war,especially combined with the incompetent buffoonery of those supposed to be in charge ! David Horovitch does a superb job with a great variety of accents depicting the book's characters.

So why only 4 stars then? Come on Audible, let's have the whole book !

I have been travelling to Prague regularly for the last couple of years and I have realized how much the Czechs have in common with the British in so many ways - particularly our sense of humour. However, even in English I don't know of another book as subtly critical of the stupidity of war and yet so amusing at the same time. I came to look for this book because my favourite restaurant in Prague is called U Brázdů and is part of the small chain of Švejk Restaurants, where authentic local dishes can be savoured. This book is an insight into the Czech folklore that is well worth listening to.

Disappointing, distracting and too long.

The Austro-Hungarian Empire had many nationalities so representing them by using different accents is a good idea. What is not a good idea is using British and Irish accents to do that. After listening to several different English and Scottish accents I said to myself, I bet he'll use an Irish accent next. Sure enough I was proven right. There's no system to how the accents were distributed either. This added an unnecessarily and distracting comic element to a story that is already an attempt at comedy.
As for the story. It's doesn't have a plot in the ordinary sense it's just a series of vignettes which are indistinguishable from each other after a while. Hasek was a Communist so the targets of his satirical portraits are are you'd expect but after you've read the first four or five you've really read them all. Even though this is an abridged version it's still five hours too long, if you really want a taste of the story go for the BBC dramatised version which is just about right lengthwise.

You can't help but admire Svejk - an apparent idiot whose folk logic helps him out of scrape after scrape during a year as a Czech soldier in the Austro-Hungarian army.
Brilliantly narrated - all the absurd characters Svejk meets come alive with an amazing range of voices and accents.
Highly highly highly recommended

excellent adaptation of one of my favourite books. narrator was 5 stars too, I'd be more than happy to purchase another book he reads. well paced, names excellently pronounced, I'm bound to keep returning to this brilliant reading

What made the experience of listening to The Good Soldier Svejk the most enjoyable?

The narration is first class in this adaptation of the classic. Editing it down to its current size was a good idea and I don't think anyone will miss any of the filler.

Excellent performance and very suited to the book.

It's funny but you won't need to change your underwear.

A remarkable and incredibly funny book

This book perfectly shows the absurdity of war and monarchies of the 20th century through an incredibly funny story.