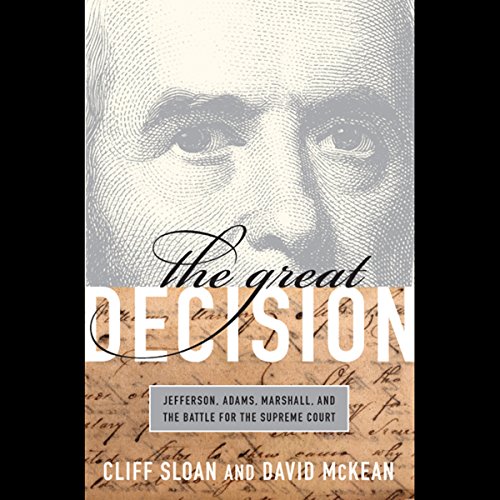 In 1800, the United States teetered on the brink of a second revolution. The presidential election between Adams and Jefferson was a bitterly contested tie, and the government neared collapse. The Supreme Court had no clear purpose or power - no one had even thought to build it a courtroom in the new capital city.

When Adams sought to prolong his policies in defiance of the electorate by packing the courts, the fine words of the new Constitution could do nothing to stop him. It would take a man to make those words good, and America found him in John Marshall.

The Great Decision tells the riveting story of Marshall and of the landmark court case, Marbury v. Madison, through which he empowered the Supreme Court and transformed the idea of the separation of powers into a working blueprint for our modern state.

Rich in atmospheric detail, political intrigue, and fascinating characters, The Great Decision is an illuminating tale of America's formative years and of the evolution of our democracy.

"[T]heir book provides a colorful description of the tumultuous times in which the Court rendered its landmark judgment. And the book's implicit references and comparisons to our own politically divisive times will not be lost on the attentive reader." (The Washington Post)
"In this highly accessible book, the authors skillfully build suspense and tension around an outcome readers may already know." (Booklist)

What listeners say about The Great Decision

The first case I read for my Constitutional Law class in law school was Marbury v. Madison (1803) 5 U.S. 137, 1 Cranch 137. I was brand new to law school, and the case mystified me. I understood why Marbury v. Madison was crucial to establishing the Judiciary as a co-equal branch of government, along with the Executive and Legislative branches. Despite my love of American History, I lacked specific knowledge of the political history and judicial structure to understand how the case ended up in the U.S. Supreme Court.

Cliff Sloan and David McKean's "The Great Decision: Jefferson, Adams, Marshall and the Battle for the Supreme Court" (2009) gave me the context I was missing.

John Adams, the Federalist second president of the United States, lost a bid for re-election. The winner was a Democratic-Republican, but the electoral college votes were evenly split between Thomas Jefferson and Aaron Burr.

While Jefferson and Burr schemed and plotted, Congress worked to determine who would be the third president. In that confused period of time, Adams made hundreds of Federalist appointments. One of those was the Chief Justice of the Supreme Court, John Marshall. Adams also appointed William Marbury as a Justice of the Peace in the District of Columbia.

After Jefferson took office, Marbury's commission was never delivered and Marbury filed a writ of mandamus against James Madison, Jefferson's Secretary of State, asking that the Executive Branch be required to appoint him.

"The Great Decision" describes the physical and cultural condition of Washington, DC at the time and the strengths and weaknesses of the men involved. For example, Jefferson had so little regard for the judiciary as a whole and the Supreme Court specifically, he didn't bother to send a lawyer to represent the government. Jefferson also hated his second cousin, Marshall, which contributed to his disdain.

I was fascinated by the "The Great Decision", and it adds an important perspective to the adoption of the constitution as we know it today. That point is often lost among ubiquitous biographies of the founding fathers, although the Courts haven't forgotten it. According to Google Scholar, Marbury v. Madison has been cited by federal courts 24,589 times.

Peter Jay Fernandez narration was good, but don't listen to the last chapter (42 minutes) without a strong cup of coffee. It's the actual decision, and Marshall was establishing another Supreme Court precedent: making even the most exciting decision sound dull and repetitive.

[If you found this review helpful, please let me know by clicking Helpful.]

Brings to life the early days of the USA

What did you love best about The Great Decision?

It is fascinating to learn more about the country's leading characters in the early days of this republic. An interesting story, well told, which expanded my understanding of this country, and its history.

How the Court gained its power

The 1800 elections unveiled a schism in the body politic for the first time in U.S. history. The battle of the two party systems begins with this election. In the final days of John Adam’s presidency, he tried to appoint as many Federalist as possible to position established in legislation passed by the outgoing Federalist majority Congress. He had recently appointed John Marshall as Chief Justice of the Supreme Court when John Jay refused to take the job again. A handful of commissions for justice of the peace remained undelivered when incoming Democratic-Republican President Thomas Jefferson took office. Jefferson ordered his Secretary of State, James Madison, not to deliver them. A disgruntled office seeker, William Marbury, sued to have his commission honored.

The book is well-research even including some contemporary newspaper accounts. The book reads like a political thriller. Marbury V Madison is considered the most important legal case in American history. The case established the judiciary as the final arbiter of any conflict between the law and the Constitution. The authors supply Marbury’s historical context and unravels the complex fabric of personalities, politics and law that animated the case. Sloan and McKean spent most of the book on the 1800 election and the thoughts of Adams and Jefferson. I wished they would have spent equal or more time on John Marshall and how he came to his decision. The book suffers from occasionally losing momentum, dragging and poor editing. But overall the book provided a review of the history of the 1800 election, the antagonism between Adams and Jefferson as well as insight into legal history. If one is interested in American history and legal history this is a great book to start with. Peter Jay Fernandez did a good job narrating the book.

A story that needed telling

Slanted a bit in John Marshall's favor but not overly biased. Gripping story. A good listen

Probably great if you are a US History/Government/Supreme Court buff, but I'm not. The historical context stuff was neat though.

Recommended as a fascinating judgement, backed by a well rounded examination of the historical background

What about Peter Jay Fernandez’s performance did you like?

The narration was clear, expressive and sonorous.

The audio book ended poorly, because the Appendix, where the judgement was narrated in full in the original production, was obviously truncated part of the way through in this Audible production. Poor form Audible!

What did you love best about The Great Decision?

I had heard of Marbury v Madison mentioned quite frequently and only had a general, vague idea of what the case was about but this book gave me a much better understanding and appreciation for the historical context and complexity of the case. It also gave me a fuller understanding of our Constitution and the formation of the government which it spawned. I thought The Great Decision was a great book and highly recommend it to anyone wanting to gain a greater understanding of our history and Constitution.

What was one of the most memorable moments of The Great Decision?

The explanation of John Marshal's decision in the case.

What about Peter Jay Fernandez’s performance did you like?

I though he did a very good job.

No. There was so much information that I found it better to listen for an hour or so and then have time to digest what I had heard.

What disappointed you about The Great Decision?

This book is really boooorrrrriiinng. It purports to tell the story of Marbury v Madison, one of the first US Supreme Court decisions.

But, it illuminated political activities during the early period of US history, in long, excrucia

What could Cliff Sloan and David McKean have done to make this a more enjoyable book for you?

This seemed like an "abridged" reading. Chapters were short and leaving me hungry for more information. I also felt the book lacked direction. It took a long time to even get to the Great Decision. I couldn't tell if this was a book about the early Founding Fathers, the debate between Republicans & Federalists, the Court's history or a biography of Marshal. It probably should have been all of the above in a longer book. It is also frustrating when statements are mentioned, both correctly and incorrectly, in different chapters. For example: Marshal was referred to as both the 3rd and 4th Chief Justice & The number of ballots needed in the Jefferson/Burr decision was referred to as both 35 and 36.
Narration was a bit slow, but very clear enjoyable listen.
All in all, I enjoyed the book. A great part of judicial history that has not been given enough attention. Characters were well researched. I like any book that I walk away from learning something.

Gives great context and life to the famous decision.

This book does an incredible job of setting the scene of the landmark decision of Marbury v. Madison.

From start to finish the book explains the time and settings of the case in great narrative fashion and gives one insight of the ideas and criticisms of the time.