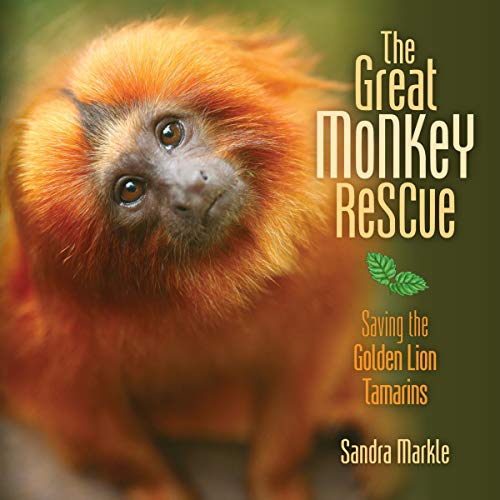 Golden lion tamarins are found only in Brazilian forests. These small, remarkable monkeys once had plenty of space to roam and claim family territories. But years of deforestation caused their numbers to shrink. They were in serious danger of becoming extinct.

To help, scientists studied the animals in zoo settings. But they faced several mysteries. Why weren't golden lion tamarins reproducing in zoos? If scientists reintroduced zoo-raised tamarins to the wild, would those monkeys survive? And how could scientists give tamarins enough forest area for the population to grow? Find out how scientists and concerned citizens worked together to give golden lion tamarins a hopeful future.

"Markle brings to life the complex, decades-long work that scientists and volunteers around the world have done to save the golden lion tamarin from extinction. As the number of monkeys dwindled due to the destruction of Brazil's Atlantic Forest, zoos implemented breeding programs. However, they were unsuccessful until researchers realized how tamarins interact in family groups. Once the numbers increased, new challenges included how to prepare zoo-raised tamarins to survive in the wild and how to provide more habitat by reclaiming pasture land to create forest corridors.... Verdict: Readers gain insights into the research, hard work, and patience involved in conservation efforts while learning about a fascinating animal. A fine choice for most collections." (School Library Journal)

"Golden lion tamarins are small monkeys native to Brazil's Atlantic Forest. After centuries of logging and the encroachment of agriculture, roads, and towns, the tamarins' habitat has shrunk to a few disconnected patches of suitable forested land. Markle clearly explains the work of several scientists and acknowledges the contributions of committed Brazilians and their government to save the species through reforestation. From its endearing cover image onward, the book encourages readers to learn about this little-known species and care about its future." (Booklist)

"Markle chronicles the amazing efforts to save a tiny (and adorable) species. In 1960 there were only an estimated 200 golden lion tamarins in the wild. Their habitat along the coast of Brazil was being destroyed by logging. In 1975 there were about 122 in captivity, but they weren't breeding; when they did, the young died. After laying out this grim reality, the economical text goes on to describe how zoologist Devra Kleiman discovered that golden lion tamarins had a different family structure than chimps and other primates. When the tamarins were housed appropriately, their populations in captivity skyrocketed, reaching 500 in the '80s. Efforts then began to reintroduce them to the wild. Initial attempts failed, but mixing wild-born tamarins with zoo-born worked; then came the push to expand their available habitats. Markle does her usual excellent job presenting information in a page-turning narrative young zoologists will not be able to put down. ...this [is] a must for nonfiction collections seeking more than just-the-facts series animal titles. An animal conservation tale with a happy ending (3,200 estimated in the wild today) and a must-read for monkey lovers." (Kirkus Reviews, starred)