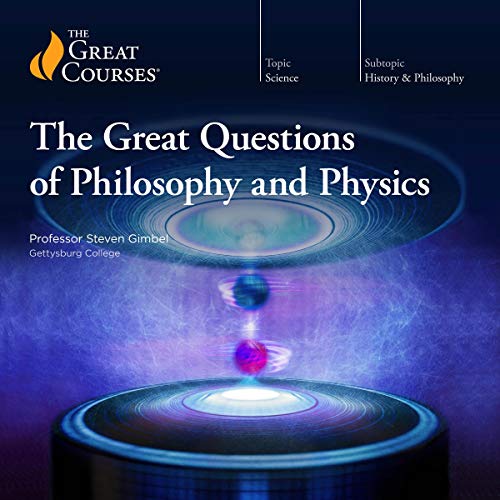 Philosophers have long puzzled over the nature of space, time, and matter. These inquiries led to the flowering of physics with the Scientific Revolution in the 17th century. Since then, the spectacular success of modern physics might appear to have made philosophy irrelevant. But new theories have created a new range of philosophical concerns: What is the shape of space? Is time travel possible? Is there a grand unified theory that unites all of physics?

Treating these and other puzzles with an entertaining and accessible approach, The Great Questions of Philosophy and Physics guides you through the concepts, theories, and speculations that underlie our understanding of reality. In 12 stimulating, half-hour lectures, award-winning teacher and philosopher Steven Gimbel of Gettysburg College covers the fundamental ideas of modern physics, highlighting the role of philosophy in setting ground rules, interpreting the results, and posing new questions.

Professor Gimbel describes the grand synthesis that Isaac Newton achieved with his universal theory of gravitation and its picture of absolute space and time. Then, you see how Albert Einstein’s theory of relativity, combined with quantum theory, overthrew the Newtonian paradigm, posing a host of philosophical puzzles. Among them is Erwin Schrödinger’s famous thought experiment about a cat that is simultaneously dead and alive according to the standard interpretation of quantum mechanics. You survey philosophical attempts to escape from this and other paradoxes, and you also investigate the role of mathematics in physical theories. Does its extraordinary success imply that the world is a mathematical system?

You close by exploring theological arguments that invoke the discoveries of physics to posit a creator God. As with other theories covered in the course, you carefully weigh both sides using scientific evidence and the tools of philosophy.

What listeners say about The Great Questions of Philosophy and Physics

Great Overview to Philosophy of Science

First, let me say that Steven Gimbel is one of my favorite instructors in the Great Courses series. He is very witty and fun and brings a real positive sprit to his courses. Regarding this particular course, it is a great overview of the big questions of physics. I would say that this course is way more on the physics side than the philosophy side however. It is mostly dealing with quantum physics and all the weirdness that that entails. So the Great Questions deal here with physics, not as much philosophy. However, keeping that in mind, this course is highly recommended. I learned a lot and also, as I said, Professor Gimbal is always worth listening to,

Professor Gimbel can explain and turn any seemingly complicated concept into a simple, easy-to-grasp understanding. His plethora of analogies and puns and comparisons were so funny that I laughed out loud through much of the book. I will listen to this one again and again. Thank you!!

the speaker was great and easy to understand this was a fascinating study of physics and philosophy why are we here what is the grand unified theory and will we discover that. is there more than one universe and how would we find out. these are fascinating subjects that are great to think about during this pandemic

I've read many paper books on physics. This was a real joy to listen to... my first audio book on the subject.

The concepts are deep. It took a second look/listen to fully understand and appreciate this course. Professor Gimbel is actually funny and I at times I almost laughed.