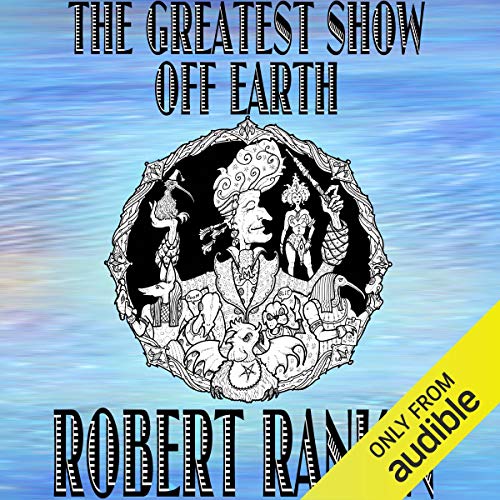 Roll up! Roll Up! You have never seen anything like it in your life. The last thing Raymond expected when he went down to his allotment was to be abducted by a flying starfish from Uranus. But these things happen and when he learns that he is being sold as a delicacy in a Venusian auction, he is grateful to be rescued by the travelling circus.

But this is not your everyday circus, this is Professor Merlin’s Greatest Show off Earth, with ancient exotic performers who travel between the inhabited worlds in a Victorian steamship. The professor has a job for Raymond: release the 200 people held prisoner on Saturn and save the population of planet Earth from extinction.

Simon, Raymond’s best friend, is in trouble, too. The Men in Grey are after him and a cult of Satanic chicken worshippers are keen to use him as a human sacrifice. Simon does have a book from the future that might help him out, and there are all those villagers with the flaming torches.

The Greatest Show off Earth is partly set in Bramfield, based upon the actual Sussex village of Henfield, where author Robert Rankin lived for a number of years. Rankin inhabited Raymond’s cottage, which can easily be found by following the directions in the first chapter. The characters are mostly real people the author met and drank with in The Jolly Gardeners, and some, like Simon, Andy, Paul, and Military Dave appear in the book under their own names. With touching naivety, Rankin thought that the locals would appreciate being in his novel. Not all did, and a certain someone, who will remain nameless, shot the windscreen out of Rankin’s car one night, and regularly left dead rats upon the doorstep to signal his disapproval.

Country life never really agreed with Robert Rankin and he now lives happily in Brighton, where he no longer puts his neighbours in his books.

What listeners say about The Greatest Show off Earth

I look forward to reading more books from this author

While exploring some of the free books on Audible, I found Robert Rankin. What a delight! I find his style reminiscent of some of my favorite authors: Douglas Adams or Jasper Fforde. The story is light and fun escapism, not too heavy on the science fiction. I'm looking forward to reading more from Rankin, and I would like to thank the author for including some of his stand alone books in the free content.

I listen whilst gardening

I think this guy is crazy but he does a good job of giving voices to what he wrote.

Longer than it needs to be.

I was entertained by the quirkiness and imagination of this story and the characters, but it tended to be a little too silly and rambling at times. I don't know that I would have been as engaged without the narrator really selling these characters.