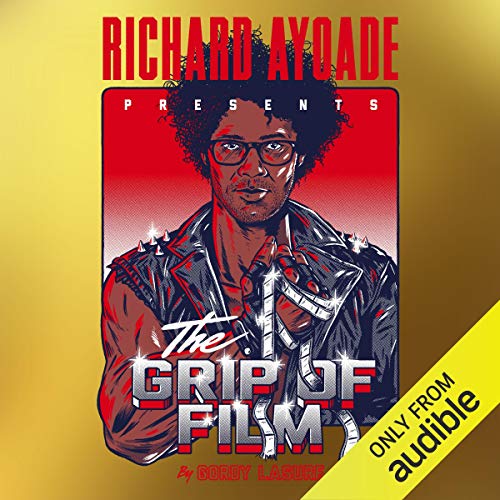 You SLUG the guy.

You KISS the dame.

You TOTAL the car.

That's movies. And I love 'em.

Gordy LaSure's passionate about film. He eats film, he drinks film, and sometimes he'll even watch a film. But most of all, he loves talking about film, and how they'd be a shit-ton better if only people would pull their asses out of their ears and listen to Gordy LaSure.

The voyage of this audiobook can be categorised as an attempt to understand How In Hell Film Works. Why are some films bad and some films terrible? How come just a handful of films (Titanic, Porky's, Dirty Harry) are any good at all? Gordy'll tell you How and Why, and he'll give you a shot of Wherefore on the side. And he doesn't shoot from the hip; he shoots from the gut.

What listeners say about The Grip of Film

Ayoade at his most Ayoade!

While i was slightly disappointed at first when I learned Jon Korkes would be lending his voice to a share of the book as well, it was actually spot on having his voice for Ayo to riff on in the footnotes frequently occurring throughout.

Note - Other reviewers are right that this book reinforces the same sad point for hours, but to me that’s a crucial part of the joke. You do have to hear lots of profanity, references to “Secret Meat,” the too-often referenced Dramedy, non-whites (whole entries are devoted to the non-personhood of anyone not fitting his Arian standards) and all the failings of women as people/ stars/ non-coeds/ [insert other infuriatingly sexist/ paternalistic descriptor here].

the more I listened, it just got funnier (i thought of it as a privilege of for once to be laughing instead of crying at these real travesties during this cathartic parody). korkes plays a great know-it-all Hollywood stereotype (perhaps just a “type”).

I love Ayoade and love his brand of humor and felt like - as a woman well past my prime according the starlet/ex-wife status defined in the book, I was all in on the joke!!!!

Unsure at first, but it got cooking. I found myself even agreeing with Gordy on some things. I must be garbage. But this book sure isn't! The re-enactments are superb!

Your life is too short to waste it on this shit.

This book is dire. The premise is that Gordy LaSure, some fictitious hollywood mainstay, is recording his thoughts on different aspects of films while Ayoade occassionally commentates. I have no idea how this came to be recommended to me.

This is written as an A-Z style thing (although it only goes to W) with tons of very small chapters for example there were 4 chapters in a row: Speaking volumes, Staging, Standing up slowly to reveal someone's true height & Stop. None of these chapters was longer than a minute. Maybe this book was designed for a dentist's office or something.

I get the joke. The author is meant to be saying 80s action was the peak of cinema and modern film is shit. This might not even be wrong but the overblown, borish nature of everything just got to be dull and grating. I can't imagine how anyone could find this funny, it was just weak and uninspired.

I think Ayoade needed to write a book and churned out the lowest effort pile of shit that he could. He even admitted to as much as part of the fictional narrative.

The narration was crap too, it sounded like the main character was being interviewed down a subpar phone line the entire time.

Honestly, I read the whole thing even though I knew I hated it after 2 hours so that I could leave an honest review saying "There is nothing in this book that is worth your time."

It's a shame, I've liked a lot of Ayoade's other stuff but this was just dire.

An unwise use of a credit

Not for me, didnt find it funny. Bad recording quality. I found it quite boring.

I had previously already read the physical book on release but the audiobook is even better. Jon Korkes in particular is excellent as Gordy La Sure with plenty of audio interjections by the author himself Richard Ayoade.

Not as good as other Richard Ayoade audiobooks

I really liked Ayoade on Top but the Grip of Film was no where near as witty or entertaining. The ironic sexism it’s quite grating, even though it is obviously not serious. Basically the character is supposed to be a really annoying, ignorant person and therefore the book is really annoying to listen to. I will probably finish it but it hasn’t been enjoyable.

In this audio book, tallish Richard Ayoade lets a misogynistic American gentleman called Gordy LaSure do most of the talking. All Ayoade actually does is interject in a couple of places and reads the name of each section in the A to W of what makes film work. LaSure postulates that it is only Hollywood movies (movies are films that people want to see) that have any artistic integrity and it is the "shoot em up" blockbusters that represent the highest level of this art form on the basis that they gross more dollar that the more arty type of film. LaSure champions the artistic virtues of Steve Seagal, Bruce Willis and Arnie Schwartz in particular as a role model for any aspiring male. LaSure has a very low opinion of British film and makes his views clearly. Through the medium of LaSure, Ayoade explains why certain movies work and some do not. The section of "the cat sat on the mat" is hilarious and made me spit my organic museli all over the kitchen table when I heard it (message to self, do not eat organic museli when listening to Ayoade audio books in future). It is a refreshing change to hear another's voice on an Ayoade audio book but the references to Ayoade's previous works such as his homage to View from the Top ("Ayoade on Top") is comforting and re-assuring.

The best book I’ve ever heard by an author with thick rimmed glasses and naturally curly hair.
I grinned, smirked and even tittered in roughly equal measure throughout.

The performance by an American acting as Ayoade's sleazy fictitious character from the book really helps make this book even better.

Ayoade's 2017 audiobook "dramedy' is a real laugh or loud treat, just the medicine needed for a winter lockdown. Ridiculing 80's/90's vintage action flicks and the mindset behind their production/existence may be like shooting fish in a barrel but Ayoade obliterated that barrel and left but a smoking crater in its place. His knowledge of screen writing and plot structure lend extra scope and depth to his hilarious observations and clever narrative tricks make the audiobook experience more immersive and multi layered.
Jon Korkes performance is sensational as the contemptible buffoon Gordy LaSure. Loved it.

this was laugh out loud funny in multiple places from the "great movie" lists to the genre titles. One of those cases where the author has to know a lot about film in order to have such a funny view of it. The only parts that didn't really work for me were the recreations of scenes from a film to illustrate a point. The rest was gold though and I'd happily read the other books by the fictional author Ayoade has created.
The performances were strong, the trump like main character was particularly strong while Ayoade is always great doing deadpan and sarcasm.