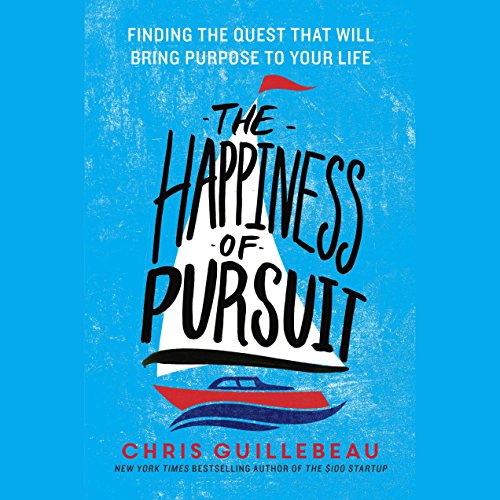 The Happiness of Pursuit

Finding the Quest That Will Bring Purpose to Your Life
Written by: Chris Guillebeau
Narrated by: George Newbern
Length: 7 hrs and 27 mins
Categories: Self-Development, Motivational
5 out of 5 stars 5.0 (1 rating)

A remarkable book that will both guide and inspire, The Happiness of Pursuit reveals how anyone can bring meaning into their life by undertaking a quest.

When he set out to visit all of the planet’s countries by age thirty-five, compulsive goal seeker Chris Guillebeau never imagined that his journey’s biggest revelation would be how many people like himself exist – each pursuing a challenging quest. And, interestingly, these quests aren’t just travel-oriented. On the contrary, they’re as diverse as humanity itself. Some involve exploration; others the pursuit of athletic or artistic excellence; still others a battle against injustice or poverty or threats to the environment.

Everywhere that Chris visited he found ordinary people working toward extraordinary goals, making daily down payments on their dream. These “questers” included a suburban mom pursuing a wildly ambitious culinary project, a DJ producing the world’s largest symphony, a young widower completing the tasks his wife would never accomplish, and a teenager crossing an entire ocean alone - as well as a do-it-yourselfer tackling M.I.T.’s computer-science course, a nerd turning himself into real-life James Bond, and scores of others writing themselves into the record books.

The more Chris spoke with these strivers, the more he began to appreciate the direct link between questing and long-term happiness -- how going after something in a methodical way enriches our lives -- and he was compelled to complete a comprehensive study of the phenomenon and extract the best advice. In The Happiness of Pursuit he draws on interviews with hundreds of questers, revealing their secret motivations, their selection criteria, the role played by friends and family, their tricks for solving logistics, and the importance of documentation.

" The Happiness of Pursuit is smart, honest, and dangerous. Why dangerous? Because it is as practical as it is inspiring. You won't just be daydreaming about your quest - you'll be packing for it!" (Brené Brown, Ph.D., LMSW, author of the number one New York Times best seller Daring Greatly)
"It's not easy to dream big - and it's not easy to turn that dream into reality. The brilliant Chris Guillebeau provides the essential blueprint for those of us for whom the happiness of pursuit - such as Chris's successful quest to visit every country in the world - is a key part of the pursuit of happiness." (Gretchen Ruben, New York Times best-selling author of The Happiness Project)

"The incredible quests Chris Guillebeau explores in The Happiness of Pursuit, including his own to visit every country, left me feeling exhausted. Of course, as a person who works from home, I limit my quests most days to taking a shower. Bottom line: these stories are inspiring--and very, very entertaining." (Joel Stein, columnist, Time magazine and author of Man Made: A Stupid Quest for Masculinity)

I found this book incredibly inspirational and motivating at the same time. It was simply amazing to see how many people took on various quest from different backgrounds and different goals. The author is only one of them not trying to be the main character but very well describing and summarizing. The individual efforts. Anyone who is interesting in goalsetting and want to put more adventure in their lives should really listen and relisten to these stories. Well worth hearing them again and again. The yearly review is also something very beneficial to do which I would suggest for everyone to do each year.

Would you try another book from Chris Guillebeau and/or George Newbern?

I think I would have enjoyed this book much more if I hadn't just finished other books that have similar themes that are just much better. I think the overall story and advice were good but I recommend many other books (Grit for instance) that offer a much more fleshed out idea than pure conjecture in this book. Secondly, the narrator was just so wrong for this book. I couldn't hear any passion or excitement in the tone or voice. This book offers stories more than actual fact, so why didn't the narrator show some passion in conveying these stories? He read it like a science book, when in reality, this book is more of a novel.

Too much narrative not enough dialogue

These stories could have been more engaging but were kept mostly factual and somewhat boring.

ok book but definately not a page turner

Would you try another book from Chris Guillebeau and/or George Newbern?

Decent book but definitely not a case of hanging on for the next sentence. I listened from start to finish but found it difficult in parts. There were definitely good parts & the author has a fantastic person story. However, many of those showcased we just a bit boring.

The author visiting every country in the world was very interesting, the least interesting were many of the stories showcased.

Would you listen to another book narrated by George Newbern?

I am neutral on this. I would not going specifically looking for his reads but would not shy away either.

Could you see The Happiness of Pursuit being made into a movie or a TV series? Who should the stars be?

not awful by any means but for my taste a bit boring.

I loved the content of this book. Chris finds 50 people who have sought to do something incredible and distilled lessons from their journies.

However, I thought that the narrator's voice didn't match Chris's quirky writing voice.

I felt moved at various parts of the book. At the close, I was surprised to feel tears in my eyes. I whispered, "Thank you!" This book may very well change how I live.

My quest is out there somewhere.

This is inspiring if nothing else. It restores the idea of meaning and purpose and will definitely inspire you to do something with your life. No matter how big or small. Thank you for these tales.

All you need for take off!

after reading this book, I realized one thing. I just need to take action. I created a life list, and decided to do something that will bring me closer to it everyday. It is inspiring and nice to listen to stories in this book, but is even nicer to start my own.

I’ve had lists, goals and quests my whole life. This book helped me amplify and clarify my current ambitions. It was a fun and inspiring read!

If you are restless and are always looking for the next project? Or, looking for your purpose? You need to listen/read this book. It just goes into details how to stay happy while pursuing a goal. I learned so much here! And, I finally can put a name oi n it. I am a Quester :) MUST READ!

Loved it, although it took me a couple of chapters to get into it. Initially I thought it was only suited to those who liked to travel but the stories can be adapted & applied any undertaking. Well worth a listen!

Loved the narrator, great voice. I have a tendency to lose focus but he managed to keep me awake.

Good but definitely not on the level of $100

Really good overall, very interesting but it's mainly just a collection of interesting stories, doesn't give you as much to go away with when compared to $100 startup. Chris's writing style is slick and well executed though so I would deffo recommend it if you're a fan :)

what reason is there for going everywhere?

after a while of listening I can't help feel there is no reason for checking off all the nations on earth (one's recognised by the UN) as the only border is in the human mind.

Useful for me as over the last years I've lost my life direction due to some personal and family setbacks. The idea is simple (find life quests like "visit every church or sports stadium in your country", "hike 1000 km") but well elaborated. Some filler in the book, but not excessively so.