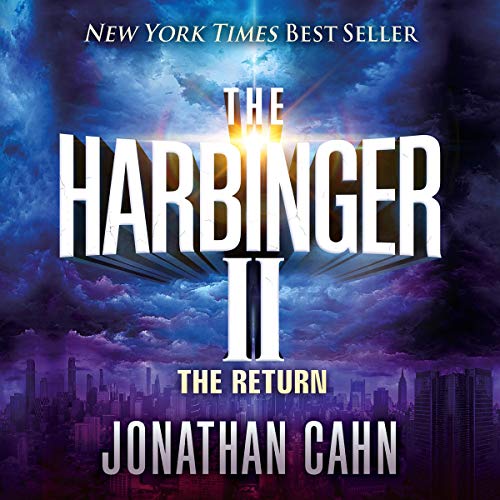 Are the unprecedented crises of our times the signs and warnings of coming judgment? Does an ancient mystery hold the secret to the events of our times and the future of America and the world? Is this mystery even behind the shakings that have now overtaken the world and America? How much time do we have left?

In 2012, Jonathan Cahn caused a worldwide sensation with the release of his first book, and massive best seller, The Harbinger. It was hailed as "stunning", "prophetic", "mind-blowing", and "astonishing". Cahn followed it with best seller after best seller, but he has always held off on writing a sequel. But now, for the first time, Cahn opens up what could not be unlocked before - the mysteries that couldn’t be revealed until the present time, the manifestations that have taken place since The Harbinger came out and up to the present hour, and the mysteries of what is yet to come.

Ever since The Harbinger was released, people have been asking:

What listeners say about The Harbinger II

Awesome book .next to Bible. So prophetic.

Prophetic and mind blowing. A must read for all especially those interested in Bible prophecy.

Mysteries for a Time Such as This

When the twin towers fell September 11, 2001, I can clearly remember where I was, just like it was yesterday. I remember, too, that our oldest son, a senior in high school had entered the delayed entry program for the U.S. Army some three months earlier, and was due to ship out the following summer. I remember thinking, oh, my will our boy want to go now? How will we LET him go? But to my surprise, his resolve was solid. He DID want to go, he did wish to stand by his commitment to serve his country. Now some 19 years later, that same son has 18+ years under his belt in the U.S. Army. And we live in a different world. The “shakings” that began on 9/11 those 19 years earlier, to our dismay have not changed America, have not turned hearts back to God; far from that; within so little time, things were back to what they were before . . . prior to the enemy entering the gate and attacking us. In his latest book, Jonathan Cahn has brought forth a continuing prophecy. It sounds like a story, a parable, if you will, of what has happened following the breach of 9/11 up until the current day. It is enlightening and chilling. It is not political. It is humbling. And it is a word for our time. God’s word is full of the very same message, if we only will crack it open and HEAR. The Lord will need to till the hard soil of your heart to prepare you to absorb and take in what The Harbinger II has to say. Because the world has long been singing a different tune, and bombarding us with a message that is so contrary to God’s word, so as to make what Jonathan Cahn says here to seem foreign, to make one balk at it. Take your time. Think about it, before you throw up roadblocks. I fear for America. I fear for the souls that are lost . . . the ones that have wandered far from the path they were once on. Seek God with all your heart. He will hear you. Only HE is able to heal our land.

Loved It and could not put It down. I listened to It on Audible and finished In 3 days. The narration was great Very prophetic and sincere, just what the world needs right during these uncertain times to help give us hope.

MR Cahn open my eyes to events happening around us. I am taking time to look deeper into the events he shared. This book and his last one The Oracle are must reads. Help us dear Lord to fall on our knees seeking your forgiveness

It is now the hour that we must return to Him who has blessed us. This story will give new hope to all who will hear what God is saying.

This book reveals the mysteries behind the events of today. Understanding, answers and direction lie in this book for those who have ears to hear. Awake and Arise!

A powerful eye opening book everyone should read.

Excellent reading for understanding our connection to Israel, America's foundation, and what believers and non unbelievers need to understand to heal our country and what we must do.

loved it, this was a eye opening read. recommend everyone reads this awesome book. READ

The urgency to reach the lost and to become so intimate with Holy Spirit was made manifest in and through this book. Truly exposing And revealing what God is praying So we can partner with Jesus

A Trumpet sounding for America!

Loved it and was so amazed at its accuracy and content. Powerful message from the Lord and brings light to the events in the world around us.

This is an incredible book...a must read!

This book reveals so many great mysteries of how the United States was established in the template of Ancient Israel. To understand what we see happening in the world today, one must see the Harbingers and how scripture reveals a plan for The Return to God! I would highly recommend this book !

Everything JC does is filled with Holy Spirit. This is no different. So tuck in and eat it all up because this is Holy Soul Food

Everyone needs to get this!!

It's powerful truths this man is truly a watchman sent by God to warn the world and sound the alarm, THOSE WHO HAVE AN EAR LET THEM HEAR!!! TAKE HEED!!!

I am not a religious person by any stretch but I love these books and it left me curious, confused and thoughtful.

Sometimes bits of the repetition was a bit grating but message and information was fantastic. God is a master architect! It’s time for people to prepare to meet their maker.

Great story / prophecy. Narration is measured and engaging. I didn't like his 'female' voice.

Everyone on the planet needs to hear this.

Tosh a plane flew into the pentagon? Really?

I am not a profit but if a plane flew into the pentagon that would be a massive miracle. And a foreign enemy was responsible for 9/11 come on does anyone on earth still believe that? Sending this back

Interesting but too long for me🥲

Really interesting content I haven’t heard from any other source but felt it was over laboured in the narrative and became difficult to stay with it to the end. A shorter book with the facts presented without the narrative may have been easier for me.
Not sure if the chosen narrator worked for me either. Maybe a female narrator for the female parts would have been less irritating