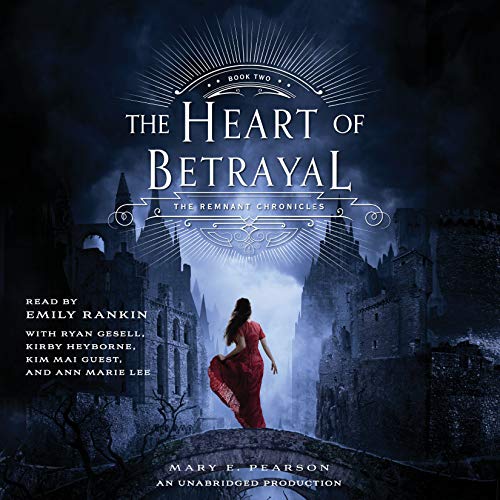 Held captive in the barbarian kingdom of Venda, Lia and Rafe have little chance of escape...and even less of being together.

Desperate to save her life, Lia's erstwhile assassin, Kaden, has told the Vendan Komisar that she has a magical gift, and the Komisar's interest in Lia is greater than either Kaden or Lia foresaw.

Meanwhile the foundations of Lia's deeply held beliefs are crumbling beneath her. Nothing is straightforward: There's Rafe, who lied to her but has sacrificed his freedom to protect her; Kaden, who meant to assassinate her but has now saved her life; and the Vendans, whom she always believed to be barbarians but whom she now realizes are people who have been terribly brutalized by the kingdoms of Dalbreck and Morrighan. Wrestling with her upbringing, her gift, and her very sense of self, Lia will have to make powerful choices that affect her country, her people...and her own destiny.

What listeners say about The Heart of Betrayal

I love this book.. narration is also very good..I feel like it's better than reading

Ive loved this series! It has a great storyline, with a love triangle but different from the usual love triangle scenarios that are easy to predict. It's very well written by the author. I thought the 2nd book kept my interest just as much as the first book, although it did tend to run a little long in some areas, but still held my attention that I didn't want to put it down.
For the most part the performances by the narrators were good, although I was not crazy about the voice of Cayden. Thought he was a little bit robotic and creepy sounding.... Great series though and can't wait for book 3

I wouldn't stop anyone from reading/listening to it--but I also wouldn't heartily recommend it. I think it might have been better read than as an audiobook, as sometimes I got confused by the gaps in changing POVs and where we were in the timeline of events.

I liked the person who played Rafe--the voice matched the character.

I was slightly disappointed with this. I bought it as a road trip listen, and it took me months to finish it because I just couldn't get into it until midway through. I don't think the character development was totally there, or at least it wasn't consistent with the characters as I recall them from the first book, and that comes across more when you hear it aloud than when you read it.

first off audible did not list this as a second book in series. I was having a hard time following it. I was thinking man this reads as a second book not a first. I can't figure who these characters are. so I googled the book and author. and yep it was a second in series. but other that that it was OK. I just wished the princess was tougher. it kind of drug a bit.

Wonderful. The story itself and the narration. Even better than the first in the series.

I was so disappointed with this trilogy overall. The first book for me was just meh but because it ended in a cliffhanger had to find out more. FYI the writer tried to create a love triangle but it was an epic fail from book one cause there was a clear luv interest. Therefore in book 2 I just felt sorry for the other guy who had to wait till the bare end of book 3 to find some happiness.... smh
But overall my biggest beef with this series is the author’s depiction of who a strong woman is supposed to be or what shapes her. When I say EPIC FAIL smh it was bad I wanted to connect with Lia but most of the time she came across as an arrogant lil twit who didn’t think for a second about jeopardizing lives to get what she felt was needed. Don’t get me wrong I admired the attempt to portray a strong female character but the author needed to make her character flow not have her as basically an #&&. You can be a strong brave vulnerable female leader without coming off as being asinine. As for her luv the poor schmuck smh I felt bad for him because I thought Lia should have been on meds smh. Their arguments were great though. I like the potential of the book but the delivery needed work. One more thing....18 hours really why!! There was no need for each book to be sooooo long my gosh what a waste of words..... I recommend with caution for the above.

I love all the characters even more in the second book.

This book made me love all the characters in their own special way! I can't decide who I want Leah to end up with. Raff and Kaden are both so sweet to her, but very different. Book 3 can't come fast enough!

Update Edit: 3/4th of the way in and I can't finish this book. It just drags and drags and drags with day to day drivel with no forward progression. This story did not have to be this long. Forty chapters of "story" in the middle could've easily been squashed together in five. Returning it.

*OLD REVIEW*
I'm on Chapter 20, not even half way through and already I feel the need to review. Though the story starts where the last book left off, the pace and energy of the moment comes to an abrupt halt. There is nothing smooth about the world building in this installment. The story has seemed to pause all progression to give endless chapters of history, philosophical statements, and tales of ancient legends that me, as a reader, won't remember two minutes later. Why the author felt the need to drone on for several chapters with mountains of information all at once, I will never understand. It's an obvious plot device, so once everything is revealed, it's no surprise. This book couldn't be more obvious. And why, oh why, is there so much focus on the language? Someone speaks a language, then it gets translated, then there's a paragraph or two analysis about it what was said. Then someone replies, Rinse, repeat. There are pages upon pages of dialogue like this and it gets tiring. Getting through the rest of this story is going to be a struggle without skipping sections.

This is the second time I have listened to this book and I still enjoyed it as much as I did the first time. The people who narrated it did such a great job with their parts. I love it when a book uses different voice actors for the characters because it gives them more personality.

I love the fact that the heroine is a strong, reliable woman who doesn’t need a man to complete her or save her, but still allows them to help her.

Of course, with a lot of the young adult novels there is a love triangle, but it is so hard to root for just one of the characters because they’re both enduring in their own way.

I do you have my favorite which I won’t say here because I want you to enjoy the book on your own.

This will probably go down as one of my favorite series of books. I love the plot twists and I look forward to reading more of the author’s works in the future.

This was good, but I found it a little lacking compared to the first book. I'm giving it 4 out of 5 stars.

After the overly descriptive beginning of the last book, I absolutely loved the rest. But this one felt really slow to me for the most part; I get that the author had to set the stage (so to speak) for the rest of the story, but I kept waiting for something exciting to happen. There was just too much setup and talking going on.

Those last several chapters were so good though! I cried a little while reading certain passages, and I was even waiting impatiently to see what would happen when it got more intense/interesting.

I still like Lia a lot. I love Rafe, and I like Kaden a lot too. We don't see as much of Kaden's companions in this book, but we do see them every once in a while. I loved the introduction of new characters like Aster, and Calantha. Overall, it was a good book; I guess I was just expecting it to be more exciting given the summary.

loved and annoyed all rolled into one

i didn't want it to end..the back story, the characters, the new found knowledge left me wanting more. although I was irritated at times with Kaden, he will be a good friend. I am rooting for Rafe but I know how bull headed and stubborn he is. They are both still so naive in different aspects, but Lia seems to be the most naive of them all. She's just as stubborn and at times pisses me off. However, I do like the fact that she's willing to grow and tries to understand different views.

I was hooked to the very last word, already downloading book 3 as I type

I loved this sequel to Kiss of Deception, the different cultures that we are introduced to are so beautifully described and well thought out. This series is quickly becoming one of my favourites, I can't wait to read Beauty of Darkness and see how it ends!

Wonderfully narrated! An amazing second book to the series. It will have you falling in love with Kaden while understanding and appreciating Lia and Rafe even more.

Love the ending ! Roll on next year ! Can't wait for the next instalment ! Great narrating ! Well done all involved ?

I can't say anymore than "loved it & I was engrossed", because the final book has just downloaded and I have to get to it...NOW!

I was completely wrapped in this book, the progression of the story goes further as we learned more about Rafe, Kaden, and the enemy kingdom Vanda. My heart ached for Lia and all the things she went through by the hands of The Komizar. But she continued to stand strong, that's the beauty of Lia. This book was more about Kaden then Rafe (I suspect that book 3 will be more Rafe heavy) as we get to see a side of Kaden that is vulnerable and ultimately heart-breaking. He did annoy me at times with how he perceives things, but it all goes back to his background. Rafe's character doesn't really expand in this as much as Kaden due to the story. I can finally say that I'm 100% LiaXRafe, they are just a great match. I will say that Heart of Betrayal reads more like a fantasy compared to the first book - Which was one of the main issues I had in KoD. The book ends on a serious cliffhanger so I cant wait to get started on the 3rd book.

Loved everything about this book, the story line, the character development, the turmoil, the unexpected plot twists, the world setting and the romantic plots. Thoroughly entertained and kept me on the edge of my seat the whole time. This is my new favourite series that I will re-read again and again!

Love these books so much!

Really good sequel to the first book, I'm so in love with the characters and the story!