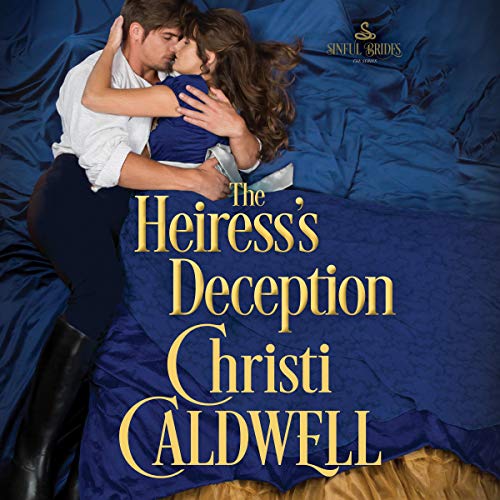 In the final installment of USA Today bestselling author Christi Caldwell's Sinful Brides series, a runaway heiress entrusts her fate to the man she betrayed.

Lady Eve Pruitt has never forgotten her childhood friend, the young pickpocket Calum, who she feared had been condemned to the gallows. Now, years later, Eve is the one in danger. Her brother, made desperate by gambling debts, threatens to steal her inheritance, and Eve has no choice but to run.

Under an assumed name, she takes a job as a bookkeeper at the notorious Hell and Sin Club. Nothing in this bawdy den shocks her more than discovering that her employer is none other than Calum. Keeping her identity a secret is one thing - but hiding her feelings for him is another.

As Calum becomes increasingly taken with the strangely haunting beauty, he looks forward to exposing her mysteries. But when her masquerade is revealed, it's left to Eve to prove that her desire for him is no deception.

What listeners say about The Heiress's Deception

I really enjoyed the story but as usual it ended really abruptly, even more than all the others. Where did they end up living? What happened to her cruel brother? Did Callum call in his debts? Did he end up in debtors prison like he deserved? A very vague ending. I know the story wasn't about the brother but he was the baddie so you want some satisfaction knowing how he ended up after all he did. I loved listening to all her books and Tim Campbell makes them even better with his brilliant narrating but they all end very abruptly and this even more than all the others put together.