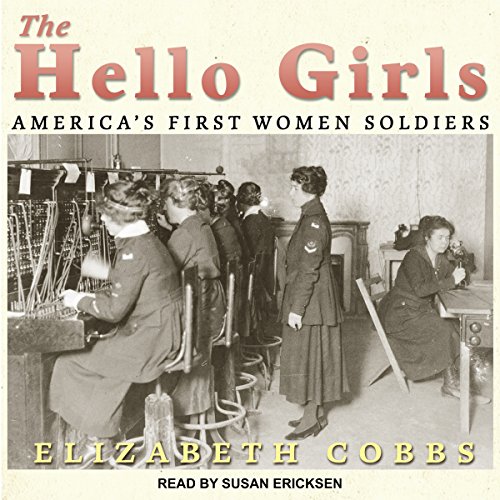 This is the story of how America's first women soldiers helped win World War I, earned the vote, and fought the US Army.

In 1918 the US Army Signal Corps sent 223 women to France. They were masters of the latest technology: the telephone switchboard. General John Pershing, commander of the American Expeditionary Forces, demanded female "wire experts" when he discovered that inexperienced doughboys were unable to keep him connected with troops under fire. Without communications for even an hour, the army would collapse.

While suffragettes picketed the White House and President Woodrow Wilson struggled to persuade a segregationist Congress to give women of all races the vote, these competent and courageous young women swore the army oath. Elizabeth Cobbs reveals the challenges they faced in a war zone where male soldiers welcomed, resented, wooed, mocked, saluted, and ultimately celebrated them. The army discharged the last Hello Girls in 1920. When the operators sailed home, the army unexpectedly dismissed them without veterans' benefits. They began a 60-year battle that a handful of survivors carried to triumph in 1979. With the help of the National Organization for Women, Senator Barry Goldwater, and a crusading Seattle attorney, they triumphed over the US Army.

"In the crisply written The Hello Girls: America's First Women Soldiers, Elizabeth Cobbs details exactly what was asked of these women during the war, and reveals, with an authoritative, dispassionate, this-was-some-self-evident-nonsense lucidity, the dismaying extent to which their country failed them when it was over." (NPR)

loved it, narrator pleasing to the ear,miles flew

loved it,miles flew by, narration pleasing to the ears,story kept pages turning, I recommend the book

I really wanted to learn this history. It was hard to listen to the narrater. The way she read did not keep my attention. I listen to books all the time and this was not good.

Wonderful until the end

I loved every minute of this book if the author had just stuck to the historical facts. But I really could have done without the last 20 minutes of the clearly leftist political slant.

I picked up this book because I thought that it was an easy read because I like history and anything that has to do with WWII. I also heard the author giving an interview on a Podcast (99% Invisible). I wasn't into "The Hello Girls" as much as I thought that I would. The author gave a general overview on what these women did during war time at operating the phone lines. I expected more on the technical details of our phone system from the past. I've learned a few key moments during this period of time, but nothing to talk about. Each chapter in this book was a mini segment. There was nothing in depth. There was a click,but no dial tone.

I almost couldn't finish this book because the narration was so annoying. The performer had a condescending and patronizing tone of voice that I had to power through, hoping that I'd get used to it. I never did really get used to it, but the book was so good I managed to keep going. I finally realized that if I set the speed at 1.5x, it wasn't quite as annoying, and that helped. I hate panning performers, but I really couldn't handle this one. The book, however, is fabulous. I'd recommend reading it rather than listening to it unless you have a high tolerance for being patronized.

A great telling of the first women soldiers, their contribution to the war effort and their subsequent struggle for recognition.

A Most Informative Book

I take for granted all the sacrifices women have made to make our lives easier. Yet, we still have a long way to go. As the mother of an amateur pilot, I hear my daughter's stories of sexism that still exists. She even wrote a book about both her joy of flying and the problems that women still have. Anyway, Hello Girls, although a bit tedious at times, was well researched, informative, and very interesting. I highly recommend it. Diane Seidemann