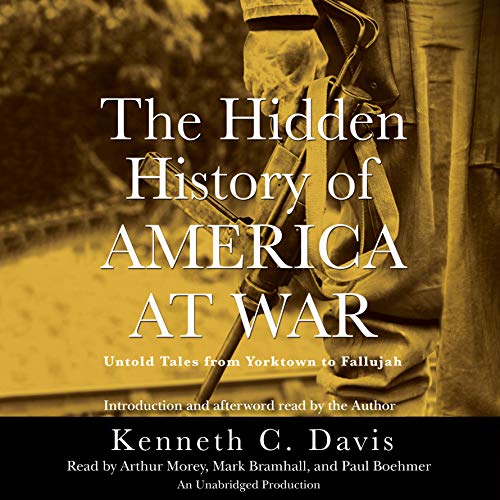 Multi-million-copy best-selling historian Kenneth C. Davis sets his sights on war stories in The Hidden History of America at War. In prose that will remind you of "the best teacher you ever had" (People Magazine), Davis brings to life six emblematic battles, revealing untold tales that span our nation's history, from the Revolutionary War to Iraq. Along the way, he illuminates why we go to war, who fights, the grunt's-eye view of combat, and how these conflicts reshaped our military and national identity.

From the Battle of Yorktown (1781), where a fledgling America learned hard lessons about what kind of military it would need to survive, to Fallujah (2004), which epitomized the dawn of the privatization of war, The Hidden History of America at War takes listeners inside the battlefield, introducing them to key characters and events that will shatter myths, misconceptions, and romanticism, replacing them with rich insight.

What listeners say about The Hidden History of America at War

This is nothing more than a regurgitation of published materials, opinions and analysis that any mediocre reader of political and military history already know. If truth, the author uses no primary source material, but instead totally relies on the work of others. He also then, with obvious intent, selectively quotes opinions and other author’s conclusions to reinforce his own preconceived biases. There are several historical factual errors and wholesale disregard for factors that make each battle situation far more complex and nuanced then this author would like the reader to believe. To me, this was more than a waste of money, it is simply bad history if you can even call it that.

Not much hidden, not a lot of history.

A little disappointing. And I did sense some bias incorporated with the narrative. Too bad.

History of major U. S. battles.