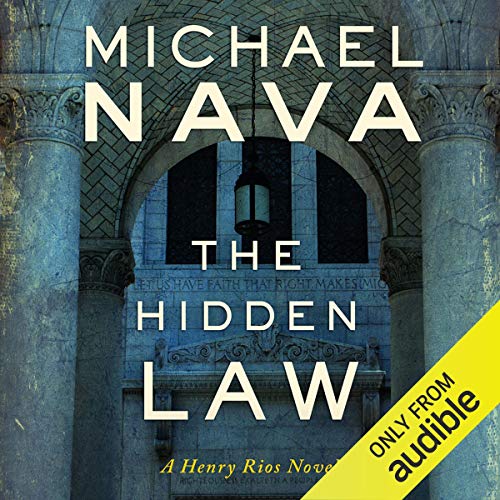 Winner of six Lambda Literary awards, the Henry Rios mystery series is iconic and Michael Nava has been hailed by The New York Times as “one of our best” writers. In The Hidden Law, Rios delves deeply into his Latino identity as he defends a young man charged with assassinating a prominent Los Angeles Latino politician. The San Francisco Chronicle hailed the novel and its author: “A beautifully conceived but gritty novel.... Nava writes the kind of small, clean, powerful novels that build in emotional power almost invisibly, leaving us breathless at the end.”

What listeners say about The Hidden Law

Henry Rios once again finds himself in the middle of trouble, defending a latino teenager accused of murdering a state senator. It’s a case with many layers, players and agendas, big and small. So we follow Henry trying to untangle the web of lies and deceptions and how he tries to defend his client to the best of his abilities. At the same time he and Josh are having a rough go of it and trying to navigate it all is getting the best of him.

The Hidden Law is the best book in the series to date. For the most part these books are mainly procedurals trying cases and solving mysteries. I feel that this book really let us get close to Henry. We saw so many sides to him and not only the fierce defense attorney. We saw the man behind the fighter. We saw his hopes and fears, his struggles, he became more human. Not that we hadn’t seen some of that before, but this book really hit it home.

I think that one of the reasons why I love these books is because they are messy. Not in terms of the writing or a poorly crafted story, just the opposite. Michael Nava is a wonderful writer and each book in this series has been amazing. Nava doesn’t shy away from the hard stuff, but shows you the harsh truths. Life isn’t predictable or constant, plans and wishes are just that and reality will pull the rug out from under you when you least expect it. And life has really played with Henry in a big way and I can’t be the only one thinking that he needs some lasting happiness after all he’s been through. But alas fate is a fickle creature… And I can’t help but feel that this might only be the beginning.

Thom Rivera, voice actor extraordinaire. He has such a great voice that I could listen to him narrate pretty much anything and love it, so bring on the proverbial grocery list and I’ll still be an avid listener. That being said, he has a true talent for narrating books, and this series in particular. He takes you back in time and makes you believe you live some thirty years ago. He makes you feel every emotion Henry goes through, good and bad. He makes you care for the people and what’s going on in their lives. He makes you wish you could change the world

Solid, hard-nosed mystery, good characters, strong message about overcoming sexual and racist discrimination, and a powerful return to the world of the 1980s. The author's uplifting message of self-acceptance is beautifully expressed in a statement he makes in an appendix at story's end:
“Rios was saved by his homosexuality from walking in his father’s footsteps because he was forced to accept about himself the unacceptable. His coming out was not simply about sexual orientation, much less sex, but an expression of a fundamental truth about his very being. His coming out represented a decision to go through this life as a whole person, not one divided against himself.”
Sadly, this appendix is not included in the audiobook.

The author writes in such a way that I feel like Henry Rios is a personal friend. Amazing writing coupled with top notch narration.

I don't remember how I found this series but I'm glad I did!
I have to thank another reviewer for pointing out that the second book in the original release was not included when the series was reissued. I found it in print (via an inter-library loan) and I'm glad I didn't miss it.

Is there a bad Michael Nava Book? I think not.

Like other books in the series, this was exceptionally well written, enthralling, and made me reflect on how I came to be who I am, much like Henry Rios does in the book.

Amidst the machismo prevalent in the Latino culture, Rios becomes embroiled in the murder of a prominent Latino politician in Los Angeles. Who did it? Why?

Read and find out! Or listen...these $2.99 whispersynch deals are too good to pass up—what phenomenal narration!

My rec? There is no reason you shouldn’t be reading this series!

This is such a powerful series, I’ve appreciated so much the depth and layers of story.