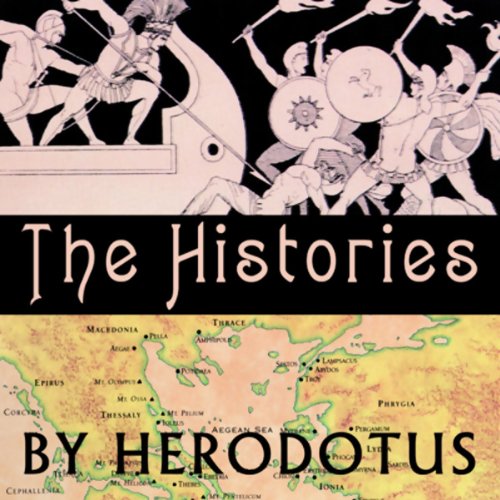 Herodotus is not only the father of the art and the science of historical writing, but also one of the Western tradition's most compelling storytellers. In tales such as that of Gyges, who murders Candaules, the king of Lydia, and usurps his throne and his marriage bed, thereby bringing on, generations later, war with the Persians, Herodotus laid bare the intricate human entanglements at the core of great historical events.

In his love for the stranger, more marvelous facts of the world, he infused his magnificent history with a continuous awareness of the mythic and the wonderful. For more than a hundred generations, his supple, lucid prose has drawn readers into his panoramic vision of the war between the Greek city-states and the great empire to the east. And in the generosity of his spirit, in the instinctive empiricism that took him searching over much of the known world for information, in the care he took with sources and historical evidence, in his freedom from intolerance and prejudice, he virtually defined the rational, humane spirit that is the enduring legacy of Greek civilization.

Pater historiae: Latin, b/c who gets Greek jokes?

The narration was solid, but not top shelf. The Histories, however, is one of those books where an audiobook helps. Reading Herodotus, one can often get bogged down in the loops of geography, people, history, culture and meandre through miles of esoterica. The audiobook gives you a good pace and force-marches you through to the end. I enjoyed the audiobook, but utilized it more as a tool as I read the Landmark series. That is another aspect where the audiobook helps. When reading one translation and listening to another, similar translation, the reader/listener is often able to glean additional information.

At 29 hours long, this is at a times a difficult listen. The story can be dry and lacks the imaginative preoccupations of fiction. That being said, the narration gives the feel that you are hearing the stories from the mouth of Herodotus himself. Like an entrancing old man who rambles on and on, you half listen out of respect to him, and half in wonder at things you've never heard before. I enjoyed the story and narration, but the audio quality was a little lower than I would have liked.

For a fan of ancient history, this is a must listen which sheds new revelations into other pieces of classic literature and in many respects sets up the mental stage for them.

I really enjoyed Herodotus' The Histories, about the background and main events of the epic wars between the ancient Persians and Greeks (translated by George Rawlinson). I was hooked by "the Father of History's" enthusiastic accounts of interesting historical and cultural information and impressed by his appealing balance of objectivity and subjectivity. And I savored his many digressions amplifying the historical context, as well as his detailed accounts of the different ancient exotic cultures (like the Egyptians shaving their eyebrows when their housecats died or the Scythians making capes from the scalps of their fallen enemies), which were in a sense all similar in their violence, heroism, treachery, brutality, ethnocentrism, and superstitious following of prodigies and omens and oracles. We haven't changed so much in 2000 plus years???

Despite some listeners complaining about the reader, Bernard Mayes, I quickly came to enjoy his handling of The Histories, easily imagining myself listening to an elderly, experienced, and decent Herodotus. I appreciated Mayes' subtle changes in tone to express a variety of moods, from Xerxes' waxing wroth at some unpleasant advice and the Athenians getting peeved by the Spartans worrying that they would ally with the Persians, to the suspenseful accounts of battles like those at Marathon, Thermopylae, and Salamis that helped decide the course of world history. I found Mayes always to be right on task, always speaking with effective clarity and rhythm, always perfectly expressing Herodotus' humor, disbelief, admiration, and criticism of his historical subjects.

The only flaw in the audiobook is the too frequent, sudden flash of a kind of static, which distracts from the overall experience to the point that I'm giving what should be a five star audiobook four stars. I highly recommend it.

The sound kept fading in and out to the point of distracting from this classic. A shame.

Pretend the narrator is your favorite Uncle

Every few minutes the oblivious elderly narrator bumps into the microphone or some other object nearby, which is very distracting. If you think of the reading as a favorite uncle or prof telling you his opinion of the history of the known world up to that point, (and who just happens to bump into whatever is near him) that makes it more tolerable. I am surprised anyone thought this narration worth selling as a product or worth paying for; I should have previewed it first, obviously. That said, if you can ignore all that, then the stories are mind-numbing, in a good way. So many civilisations I had never even heard of before! So many tyrants being horrible in ways new to my imagination when I foolishly thought the current evil of humanity was surely the worst. Amazing perspective on human history, in other words, and very worth either reading or listening to. It would be useful to have a map of the ancient world handy, though, as it is hard to envision the rise and fall of all these kingdoms, tribes and empires.

Worth the Time to Listen

Keep a good history book handy for reference (maybe the first two volumes of Will Durant's Story of Civilization), don't be concerned during the first few hours when Herodotus seems to go off on tangents, and trust that all of this ultimately comes together in entertaining and informative fashion. Also keep in mind that new research is beginning to show that the information Herodotus relates, though often fantastic, generally had kernels of truth. He clearly made a good faith effort to collect and relay what he considered honest and correct information.

Also be prepared for some pretty graphic material as the grandfatherly narrator with his professorial voice suddenly and matter-of-factly begins relating stories that sound more like something out of the Silence of the Lambs than a history book. Quite incongruous, but interesting.

I enjoyed this throughout, and my 16 year old son, who thought I was quite daft when he initially encountered me listening to this in the car, began to get intrigued himself as we got close to the events conveyed (somewhat incorrectly) in the movie "300."

This is an excellent book to listen to. The main story is highly engaging and the book is full of interesting side stories. The narration is well done. The translation, however, is old-fashioned (plenty of 'thee's and thou's).

The Father of History for nothing. As you start reading (or listening) you will very quickly become hooked on the masterful storytelling.

Whether this is true or not I can not say...

What made the experience of listening to The Histories the most enjoyable?

This book has great scope covering the geography, history, anthropology and zoology of the known world a the time. It covers Persia, Scythia, Egypt and Syria. There might be a thing or two about Greece also. Some of it might even be true. But the story is so compelling as not to matter, and Herodotus says as much many times.

He sounds very much like my Oxfordian grandfather, if I had one.

I really liked this translation of the ancient Greek, especially since it is so hard to translate. I did, though, find the narrator lacking in color and emotional depth.

Regarding the work itself: If could only have read one book in my life, it would be Herodotus' ethnography and history of the Scythians. They blow my mind. I wish I were Scythian...

If a narrator narrated with a little more "umph"/"chutzvah"/"spirit", I would easily give it 5 stars.

Herodotus read his book aloud at Athens and in many ways this work seems an ideal choice for an audio book. Bernard Mayes'voice is distinctive, and his manner may seem at first rather fussy and pedantic.But in a curious way this suits the discursive narrative style of Herodotus and his indefatigable interest in details.The translation- Rawlinson-is accurate but archaic in tone.Yet Bernard Mayes reads with such intelligence that he succeeds in creating a plausible voice for Herodotus and sustains interest throughout a very long and various work. Some listeners may be put off by a voice different from the usual mannerof reading by actors,others may be deterred by the archaic language of the translation used, but anyone who persists in listening to this very long book will get to know in an enjoyable way one of the most endlessly fascinating works of the ancient world.This version seems to me much preferable to the alternative read by the egregious and ubiquitous Charlton Griffin

Herodotus read his book aloud at Athens and in many ways this work seems an ideal choice for an audio book. Bernard Mayes'voice is distinctive, and his manner may seem at first rather fussy and pedantic.But in a curious way this suits the discursive narrative style of Herodotus and his indefatigable interest in details.The translation- Rawlinson-is accurate but archaic in tone.Yet Bernard Mayes reads with such intelligence that he succeeds in creating a plausible voice for Herodotus and sustains interest throughout a very long and various work. Some listeners may be put off by a voice different from the usual mannerof reading by actors,others may be deterred by the archaic language of the translation used, but anyone who persists in listening to this very long book will get to know in an enjoyable way one of the most endlessly fascinating works of the ancient world.This version seems to me much preferable to the alternative read by the egregious and ubiquitous Charlton Griffin

Excellently and beautifully told. I can only recommend it !

A perfect book, a perfect reader

I was intermittently enthralled, amused, appalled and amazed with this reading of Herodotus. Throughout the incredible journey Herodotus leads one, Mayes? interpretation is a delight; he becomes a faithful renderer of the author?s words, then a friend with whom one reads the text, finally, and magically, the voice of Herodotus himself. It's a sorrow to have to finally part with them. It's a thoroughly satisfying and inspiring experience and the very essence of what an audiobook can and should do; offering to the mind the richest gifts of the world?s literature.

This book will astound you, at times, enthral you at others, baffle you occasionally and ultimately fill your brain with some of the greatest stories ever told. The translation seems to be rather dated (it would be great if Audible supplied more info on translations generally), and Bernard Mayes delivery is a touch dry, but neither gets in the way of your enjoyment. One tip - have a good map or series of maps close by - this is often very hard to follow without one.

I always found Herodotus a bit of a struggle to get through, especially with his tiresome geographical ramblings, but this Audiobook was delightful! Herodotus is a great storyteller and, whilst that may be at the expense of simplifying history into convenient moral anecdotes, it's a pleasure to hear about the adventures of Croesus of Lydia, Cyrus the Great and all the other wonderful characters. The narrator even manages to make the dreariest sections surprisingly enjoyable.

I definitely recommend this to anyone who wants to learn about the "hostilities between Greeks and non-Greeks."

One of my favourite books. Read a long time ago. Even better as an audiobook. Sit back and be transported back thousands of years ago. Places you in the ancient world if you close your eyes

Awful and turgid - don't buy really should be avoided