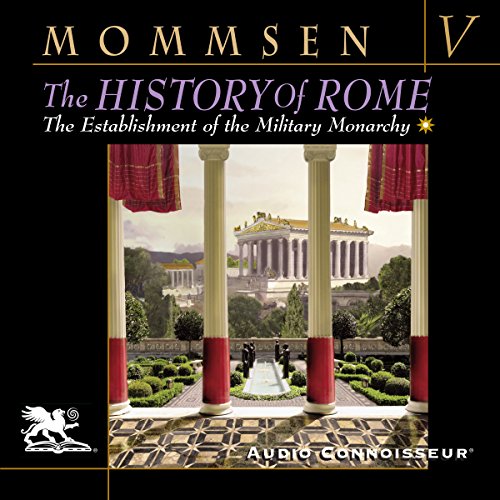 The History of Rome, Book 5

Book 5 of Mommsen's history of the Roman Republic brings to a conclusion this most magnificent of historical narratives.

It begins with the death of Sulla and ends with the accession to power of the greatest and most fascinating Roman of them all, Gaius Julius Caesar.

With the aristocrat Sulla's premature and unexpected death, the Populares (democrats) plotted their comeback. But the senatorial democrats lacked charismatic leadership and no longer had a Marius or Gracchus to call upon. The democrats needed a senator with renowned military experience and glory, something which the senatorial aristocracy (the Optimates) also lacked. Both factions turned to the young, promising general, Pompey, fresh from his successful campaign in Spain. Initially, Pompey chose the democrats. But political instability soon returned. Social unrest had become the disagreeable norm. And with the rise of the incomparable Julius Caesar, the people finally found the leader they were waiting for. Followed by Caesar's conquest of Gaul, the display of his ingenious executive skills, and his advocacy of public-minded reform, Caesar emerged as the necessary and welcomed leader in the movement toward resolution of the sorry and bloody debacle of debt, aristocratic privilege, and civil strife.

Eventually, civil war became inevitable when Pompey accepted the leadership of the Optimates, the oligarchic faction which was in deadly opposition to the common people. By accepting this leadership, Pompey vaulted to the head of a party dedicated to the material interests of Rome's wealthy bankers, merchants, and landed gentry who looked favorably on a dictatorship which protected their interests. But Caesar was too quick for Pompey, and prevailed in the subsequent bloody civil war. His victory ushered in an incredible series of reforms which were to shape Roman affairs for another 500 years. Caesar's dictatorship became the model of a military monarchy which guided the Roman Empire until its demise.

Although Mommsen used the A.U.C. system of Roman years, which begins as the Roman year one (754 BC), we have transposed these dates to those of the Christian era. All dates are BC except where otherwise indicated.

We do not recommend Mommsen for those without a proper understanding of Roman Republican history. The work of Cyril Robinson would be a great place to start for the amateur, armchair historian.

Translated from the original German by W. P. Dickson.

What listeners say about The History of Rome, Book 5

A long journey into the past

There were less cumbersome options when choosing to dive into a Mommsen writing. Having committed to reading a work by every Nobel Laureate for Literature and Mommsen being only the second chronologically, it would have been wiser to choose a shorter, singular work. But too many of the man's contemporaries like Mark Twain raved about his comprehensive History of Rome and so, alas, this long and exhaustive project. Mommsen is accused of tediousness in his style but, in truth, he is just immensely comprehensive and invested in his quest to show us our ancient past. And, of course, this isn't just Rome but western civilization from Rome's founding and it's earliest monarchic origin, through its various republican and democratic incarnations bringing us full circle with the return of monarchy under Julius Caesar. This project required a commitment of an hour almost daily over eight months but it was worth the investment in that so many holes of my historical knowledge have now been filled. Mommsen wrote more about Rome's later eras which I will likely dive into later. For now, I move on both exhausted and grateful for this literary journey well written and well spoken.

After 90 hours, I feel like I have developed a much deeper understanding of Republican Rome. Mommsen's commentary is interesting enough that the sections where I already had a firm grasp were not boring (for instance, the section on Caesar's Gallic War where the primary source is Caesar's Commentaries which I had just read).

I would definitely not attempt to either read this volume without the others or to read the entire book without already having a good grasp of the basic outlines from a shorter, popular history (Anthony Everitt has a good starter book on the Roman Republic). Mommsen develops too many themes focused on legal/philosophical concepts to skip the early volumes, and going into the project without already knowing the basic outline of Roman history and government will be difficult when he goes off on tangents. He gets pretty deep in the weeds.

Mommsen makes grand sweeping judgments and hero worships Caesar. Heady stuff to teach to those advising the Kaiser. No wonder his mother worried about him.

As for the reading some strange pronunciations.. Luckyouless for Lucullus, dayjour for de jure

The real merit of the work is to make one wonder how Rome ever survived to Augustus, let alone to 410.