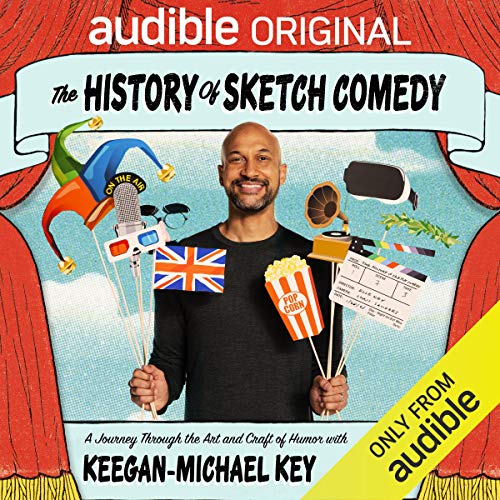 The History of Sketch Comedy

What listeners say about The History of Sketch Comedy

I listened to this with my son who loves comedy. This was such a well done series. There is history and real lessons in comedy. Keegan -Michael is so talented. My son wanted to listen to it again after we finished. Might have a comedian on my hands. We also now have a “must see” list of comedy sketches, shows and movies to watch. Highly recommend but not for younger kids as there is a lot of swearing and some adult content.

As entertaining as it is educational...Keegan’s love for comedy comes through every historical note and impression that he gives. I had to stand up multiple times and exclaim, “you can’t do that!!” As I laughed as hard as I’ve ever laughed. This was a delightful listen and I cannot recommend it enough.

So one 1 minute episode?

Where are the episodes Keegan? I know I will love them which is why the 5 stars all around but the info has nothing about release dates. I liked your show Friends from College, I'm ten years older but it still really resonated with my experiences. My best friends are still my friends from college.

A course in sketch comedy

Keegan-Michael Key is an excellent guide for learning about this comedy genre. He is so naturally funny and can pull off every impersonation and comedy sketch with seemingly little effort. This is a brilliant idea, fun and educational!

Keegan-Michael Key is a joy to listen to as he takes us on a journey through the history of sketch comedy. He uses his incredible talents and intellect to paint a vivid picture, and I laughed out loud several times in each of the ten episodes. Highly recommend, especially for anyone who is a fan of sketch, improv, or comedy at large.

it's a fun listen for a broad overview on sketch and an in depth look at Keegan's career and influences that brought him to where he is in show business.
His passion is what kept me coming back

How did we end up in this place

Being curious about the roots of contemporary comedy, I have been wading through a lot of old content like comedic films and radio plays readily available online. It was a treat to hear Keegan-Michael Key’s take on this history and listen to his favorite selections that he re-enacts. So funny. I love his genuine enthusiasm for good comedy and adore his playful nature.

Better than expected! A good history lesson and entertainment all wrapped up in one audio presentation!

I love it, I'm looking to start. a YouTube channel and I love being silly

One of the best things I've listened to on Audible. The concept, writing, and delivery were just brilliant. Turns out there's some 'science' behind sketch comedy. But who cares, it's really really funny. As in "why is that crazy man laughing while walking his dog around the block?"

Acquired taste...unfortunately I didn't acquire it

Unimpressed by the trailer, but it does reflect the delivery
There has clearly been some research and thought put into the script of the actual series, but I really think that the delivery (for a UK audience at least) needed subtle understatement rather than the over-excitement of K-M Key

This is brilliant, listen to the first episode and you’ll be hooked. Thank you Keegan-Michael Key and Audible!

Nice to listen to someone who loves the subject

I have enjoyed this because it is well researched and Mr Key clearly enjoys his subject matter. If you are on the fence then the author/narrator's enthusiasm will carry it. It's always good to listen to something done with love of the subject matter. This shines through although I agree that its a bit American (with other reviewers). To my mind however this is a plus as with this hyper level of enthusiasm you could sell me piss as vinegar LOL.

Hilarious from strat the finish with entertaining stories that are well read and role played by Keegan Michael-Key.

A history of American sketch comedy

Which is’nt a bad thing, but as a British listener it was hard to see British sketch comedy reduced to one episode, talking about comedy from over 40 years ago and more and missing out Not the Nine O’clock News, Big Train, The Fast Show, Smack the Pony and Green Wing to name a few feels like it’s selling things short on our side of the pond. Great presentation though.

I loved this. I had been a fan of Keegan M Key from Key and Peele, so his loose, conversational style didn't throw me. Rather, I found it compelling. This was meticulously researched and the sketches themselves, immaculately performed, so this approach made it feel less like a lecture and more like a back and forth. I also liked how eclectic and unsnobby it was, in terms of the ground it covered and as a Brit, I loved learning about sketch history from across the pond. Worked for me on every level.

I love comedy and enjoyed the history parts of this, especially the British episode.
However, whenever Key tried to be funny I felt like the only person laughing at his jokes was him. Maybe it's an American sense of humour that I do not get but he was totally over the top and loud. His recreations of some classic sketches made them unfunny and even made my favourite 'fork handles' sketch sound terrible.

it begins with E

Mr Key, I truly had a blast laughing along with you. Well told, enthralling story of one of my favourite genres. Thank you for making this book a pleasure to listen to.

Informative, but limitations of the medium

But the medium of podcasts may not be the best way to share this knowledge. I did learn a lot about theater and classic film etc. And yes, analyzing comedy does tend to take away from the funny so that's not always his fault...

Yet overall, I wish it was a visual documentary. And I also wish they had the rights to all the clips he does impressions for, even if it was only audio, would have been much more entertaining that way is all.

Still, was worth listening for anyone who enjoys sketch and comedy.

It is easy to watch and laugh at comedy but it isn't always easy to know the mechanics behind why you laugh and what draws you in. This is a great overview of comedy throughout the years and countries. It is a pity it only scraped the surface of sketch comedy outside of America or the influence of women and minorities.

. Audible posts reviews at its discretion. If the submitted review does not meet our guidelines, you will be notified via email

this is the best

big fan of keegan-michael key. he made this the best experience you could hope for. even if you don't know who he is give it a try and see what im talking about. enjoy the ride!