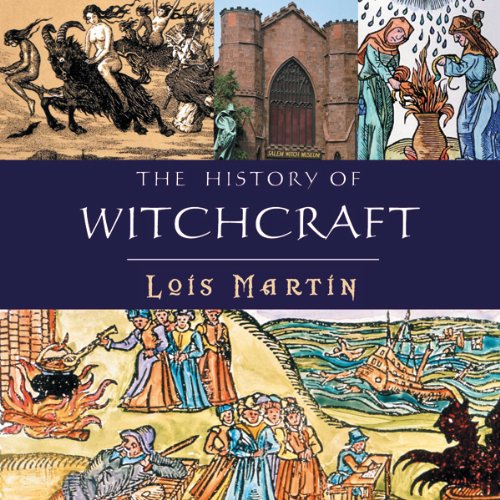 Witchcraft has recently been undergoing a huge popular revival, but does modern pagan witchcraft really bear any resemblance to its historical antecedents?

The witch in history was a very different creature from her modern counterpart, and this book sets out to explore the historical background to the European witchcraft phenomenon. It examines in detail the growth of the ideological, cultural and legal concepts that eventually led to the carnage of the Witch Craze in the 16th and 17th centuries, which, it is estimated, may have claimed the lives of around 40,000 people.

For both Medieval and Reformation scholars alike the Devil and all his works were a very real threat. Their conviction that witches were the servants of Satan led to the formation of perhaps one of the greatest conspiracy theories of all time: a belief that witches were working in league with the Devil in a diabolical plot against all Christendom.

Witches were transformed from poor deluded old women who rode out at night with the pagan goddess Diana into devil-worshipping heretics who became the focus of a centuries-long, Europe-wide campaign determined to seek out and destroy this evil wherever it was to be found, regardless of whether any of its victims were actually guilty or not.

What listeners say about The History of Witchcraft

A brief look at the history of Witchcraft

I enjoyed listening to this audiobook. It is a brief look at the ideas and origins that created the witchcraft scare from the 13th to 17th centuries and helped fuel the mania that brought about the Witch Hunts from Europe to America.
The reader Brogan West does a good job telling the tale.
My only complaint is he makes one mistake and corrects it and this should have been edited out.
If your interested in this history I recommend this audiobook.

I Really Liked this Brief History

This book was a great concise history of witchcraft. I really liked the discussion of the Keys of Solomon and demonology and how it fit with magic users and witches. I also found the narrator to be extremly nice to listen to. I think his accent added a lot to the subject matter. The only reaason I'm not giving it five stars is that I was disappointed in it's short length.

More history of Christianity and not witchcraft

The title is misleading becsuse its more about christianities opinions than real history. I do not recommend.

Great Information - Not So Great Performance

If you could sum up The History of Witchcraft in three words, what would they be?

Great Information - Not So Great Performance

His reading was practically monotone.He read like he could care less about the information; no inflection, no interest.In fact, there was one section that he goofed...rather than re-record, he took a deep sigh (which totally sounded like he knew he flubbed, but didn't care) and just repeated the line.

There were certain parts (ex: history of Satan) that made me go back and listen again.It was great to have this information in one "location".

Would you listen to The History of Witchcraft again? Why?

No, I don't think so. The book was enlightening but i would probably not need this information again.

Chasing the source of misfortune.

I enjoyed the history and the contrast with modern practices.

Least: The program seemed to abruptly end with a discussion of the Benandanti.

It was interesting but I'm not sure about time well spent.

Would you be willing to try another book from Lois Martin? Why or why not?

Definitely, he mispronounced words and made a mistake at one point and had to start again. Unprofessional

Could you see The History of Witchcraft being made into a movie or a TV series? Who should the stars be?

Good book. In fact, I really enjoyed the topic. However, the narrator's monotone delivery and Scottish brogue make it a tough run through. It's a shame when an author's good labor doesn't get its match in audio production.

An interesting book, completely ruined by the poor quality of the reading and the narrator's continued mispronunciation of several words, which diverts the attention from the subject matter (by this I do not mean the regional accent, but simply the inability to pronounce words correctly). I shall buy this title in my local bookshop as the subject sounds interesting; but the audiobook is, sadly, a complete waste of money.

Incidently and quite contrary to the above review, I really enjoyed this. I came about it quite by chance. I had purchased one of the other books by the same narrator without realising he had read this particular title. I'm no expert on the subject but have a few similar title's and thought i'd give this a listen with some of the vouchers i'd been given. It is a very niche subject and while some of the pronounciation isn't quite the way i would have done it, he brings alight the subject matter. If anything, the narrator is given a tough time by a badly guided book that seems to jump over and around its subject without a clear structure. Worth a buy if this is a your bag!!