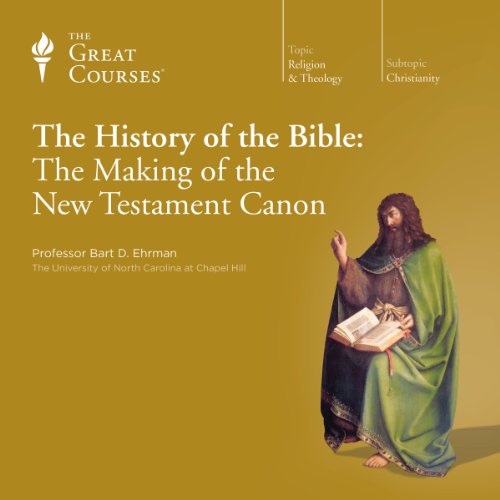 The History of the Bible: The Making of the New Testament Canon

What different kinds of books are in the New Testament? When, how, and why were they written? And why did some books, and not others, come to be collected into what Christians came to consider the canon of scripture that would define their belief for all time? With these 12 lectures, get a fast-moving yet thorough introduction to these and other key issues in the development of Christianity. Designed to deepen the understanding of both Christians and non-Christians alike, this lecture series takes as its perspective the historical, rather than the theological, issues behind the development of the Bible. And it's an illuminating perspective, indeed, ranging across issues of language, oral history, the physical limitations of spreading the written word at a time when the printing press lay far in the future, and, of course, the theological forces that were shaping Christianity, molding a commonly accepted canon from the various expressions of the faith spreading across the ancient world. Professor Ehrman recreates the context of the times in which the canon was being assembled so that you can understand what the message of each written work would have meant to ancient Christians. You'll come to see how the diverse books of the New Testament were gathered together into the form we now know, whether it's the four canonical Gospels (whose authorship was only attributed by later Christians), the book of Acts, the 21 Epistles, or the book of Revelation (sometimes called the Apocalypse of John).

These lectures are a compelling introduction not only to the development of the Christian canon, but to all of the forces that would play a role in early Christian history.

What listeners say about The History of the Bible: The Making of the New Testament Canon

An Abridged Version of "The New Testament" Course

MAIN POINT: The content should've been more focused on the "making" of the canon as opposed to a quasi-survey of the canon. Ehrman's "The New Testament" course covers almost the same exact material with just a little more detail.
____________

Ehrman starts the second to last lecture reminding listeners that it was (I'm paraphrasing) a long and detailed history leading up to the selection and discrimination of books. Yes, Bart! That's why I bought your course. I wanted to learn about that part of Christian history in particular. Problem is, he spends an inordinate amount of time (75%) walking listeners through historical discrepancies in the gospels, pseudonymous Pauline epistles, scribal errors, orthodox corruption, conflicting theologies, et cetera. All interesting topics.. WHICH SHOULD BE AND WERE COVERED IN DETAIL DURING 'THE NEW TESTAMENT' COURSE! Direct listeners, if they would like to learn more about those areas, to purchase that course.

This course could've briefly touched on those issues to show there are prior questions one should be asking of the New Testament as well, but it should've focused primarily on particular arguments, detailed interactions with patristic fathers and other "heretics", from the second to fourth centuries, culminating in the Athanasian canon.

Ehrman is a fine scholar of the New Testament and a great expositor of tricky textual and interpretive issues. I've learned a lot from him. But he has particular pet project areas he focuses on, and it seems to dominate his lecturing style. I feel like he is constantly trying to prove the same things over and over again, even when what he's looking to prove doesn't exactly fit the course aim.

Bart is an avowed Atheist and used this course to further his agenda. spent more time on early Christian sects than any book of the bible. completely skipped some books of the bible. offered a bunch of one sided arguments attacking authenticity of the books while not providing any of the supporting arguments. a waste of time and money. very dissappointed and Will avoid great courses in the future.

This book has too much overlap with other courses by this same lecturer. If you've already heard the others, it's not as good as his lectures on the early Christian church and the ones on the controversies of the Bible. I was hoping for new or more information than what I got in the other lectures.That being said, as a whole, good information. Ehrman is a good lecturer.

The History of the Bible as Seen by a Pagan

This is Christian history as seen by a cynical secularist. Interesting but flawed. Unbalanced and unfair. Thel professor presents the story of the Bible from the perspective of a skeptic and cynic+certainly not orthodox nut rather a summary of what non-believing scholars speculate-which is the academic reality of post- modern theology schools, but disengenuous because the lecturer allows the neophyte to believe this is what Christians actually think. In this regard, the lectures are worse than flawed, they are deceptive.

I disagree a bit with the previous reviewer in that although there are iTunes U courses that are excellent, Prof. Ehrman is the top of his field. I very much enjoyed the lecture series, Prof. Ehrman is an excellent lecturer and presents information in a clear and interesting way. I enjoyed this course more than the books, but I prefer to hear history and science in lecture form.
I highly recommend this lecture series if you are interested in the subject. I feel prof. Ehrman presents the subject in a fair and objective light, he is only presenting his academic studies and is not teaching a sermon or ranting against religion.
Thank you

This was the worst purchase ever. I did not read the whole book but what I did read was not what I expected based on the book’s description. I would not recommend this book to anyone.

What we don’t know

I had heard that the myth that the Council of Nicaea involved voting which books to include was false but I hoped this lecture series would tell how it actually happened. It seems the answer is we just don’t know.

This series details many different views of early Christians and Ehrman depicts them very well. It seems that each competing group accepted books which seemed to agree with their understanding of Christ and rejected any others as heretical. Not surprisingly, the views of the dominant church in Rome won out. Our earliest list of books that matches the modern New Testament dates to several hundred years after the books were written.

So there it is, we found the list. But... how did it become official? If not at the Council of Nicaea, perhaps at another ecumenical council? Or decreed by some pope? Of course some things are just lost to history but this is so significant I had expected a more concrete resolution to the ultimate question of how the New Testament canon was made.

My only real criticism of Dr. Ehrman is that he made no comment on this. For all I know at the moment of finishing this lecture series, there may be an event where the canon was made official which Ehrman chose not to include here. Or perhaps there is no such recorded event in history. In either case I wish had addressed it.

Listening to Ehrman on the canon would be like listening to a flat-earther teach the Copernican revolution.

A scholarly and historical (not devotional) perspective on how the New testament came to exist in its present form. The course is a lecture series given by premier Bible Scholar Bartrand Ehrman. If you're looking for an objective view into the history of the Bible and Christianity, I highly recommend this series.

An embarrassment to The Great Courses series

I mistakenly assumed that this was a serious history book on the NT. The word "history" should be removed from the title and the book be removed from The Great Courses series and placed in the Fantasy section where it belongs.

It is 6 hours of a pompous college professor bloviating about his intellectual superiority and using the same tired old contradictory arguments and circular logic to attack Christianity.

If you're interested in listening to the kind of liberal, secular nonsense being spewed out in many colleges and universities today then you might like this book.

If you're looking for a serious treatment on the historical development of the NT Canon.... don't waste your time and money on this book.

I was looking for a history of the New Testament that isn’t hugely biased for or against it, but focusing on the sources we have available to us. Hard to say whether or not this is the case because most have a bias of some kind. However, this made a very informative listen that kept me interested right to the end, clear and lacking jargon. The speaker has plenty of expression and is clearly very interested in the material himself. Would certainly recommend as a place to begin the journey of learning biblical history. Looking forward to listening to some of his other lectures.

Easy to listen to and riveting topic matter. Very happy I bothered! Loved the whole thing.

I love listening to Bart. Great depth, well presented. I'm not sure his audience is Christian as they didn't laugh at any of his jokes bar one and he was left awkwardly having to explain them, which I found amusing and endearing. Either way, highly recommended.

An important and objective overview

This is a very clear and well researched study into the history of the New Testament. The presentations are appropriately structured and clearly presented. It also whets the appetite for more.

The teacher talks against the bible and is not a Christian. I am not happy.