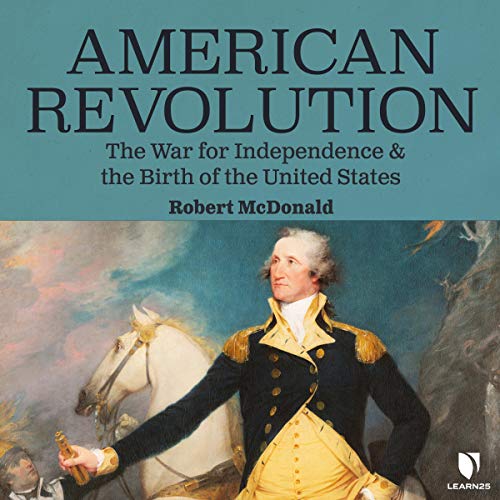 American Revolution: The War for Independence and the Birth of the United States

The American Revolutionary War has inspired best-selling books, iconic paintings, and hit Broadway musicals. More than 250 years after the “shot heard around the world” was fired in Concord, we remain fascinated by the causes and legacy of the Revolution.

In 18 dynamic audio lectures, West Point history professor Robert McDonald leads you past the politics and battle tactics to explore the underlying ideas that sparked the Revolution. The editor of The American Revolution: Core Documents (Ashbrook Center, 2016) and writer or editor of numerous books about the Founding Fathers, Prof. McDonald has an encyclopedic knowledge of the complex factors that made the Revolution much more than a war for independence.

Under his guidance, you’ll examine American history from the establishment of Britain’s North American colonies through the ratification of the Constitution. Although you’ll revisit famous events like the French and Indian War, the Boston Massacre, and the First Continental Congress, this course invites you to reconsider the wider context — political, religious, and economic — of the Revolution.

Throughout the series, you’ll entertain questions without easy answers. How can we be sure that it was the Revolutionary War and not something else — like the Enlightenment — that was driving change across the landscape? How did the new land of liberty approach the issues of slavery and women’s equality?

Join Prof. McDonald for a fresh and exciting take on the classic story at the heart of the United States of America.

What listeners say about American Revolution: The War for Independence and the Birth of the United States

See History in a New Way & Learn from the Best!

Professor McDonald is the type of teacher whom you would want to teach you, your children, and just about everyone else. His speaking style is engaging and colloquial, but he doesn’t talk down to the listener. You can hear his enthusiasm for the subject in the very tone of his voice. He knows that the teacher’s job is not just to provide answers, but to ask questions in order to make his students think.

Beware that this course is going to challenge the way that you have been taught to think about United States history. This is certainly evident in his lectures that focus on the extremely difficult and sensitive issue of slavery. Professor McDonald helps the listener to understand how slavery evolved in the former colonies in a way that made it impossible for slaves ever to become free to compete with their masters. But he also questions how truly “revolutionary” the American Revolution actually was, and he doesn’t portray the colonists as patriots and the British redcoats as tyrants in the one-dimensional way that history used to do. This is, in a real way, a course on the identity-building of the United States.

I especially liked how Professor McDonald presents history in context, and not as a series of unrelated events. His comments on the relationship of the French and Indian War and other events (the Stamp Act, the Townshend Duties) to the Revolutionary War are a good example, as is how the Boston Massacre of 1770 has been widely misunderstood in public consciousness. The course discusses how incompetence, blundering, and mismanagement of the colonies by the British sovereign and Parliament were the cause of the eventual revolution more than any actual tyranny.

In summary, this is a great course for anyone who loves history and who wants to be engaged and challenged to think about US history in a different way. One can only envy Professor McDonald’s students.

Prof. McDonald is passionate and knowledgeable about this country’s fascinating origin story. The lectures are a good length and easy to listen to. I studied this era in college and still learned many things I didn’t know.

Prof. McDonald has a knack for exploring the big themes of early American history while telling great stories about the individuals who shaped it. I enjoyed every lecture.

Unique Course on the Revolution

I've read and listened to many books about the Revolutionary War, and this one stands out, chiefly due to the presentation of the author Rob McDonald. He balances funny stories and a likable personality with a deep knowledge of the major players and events that shaped early America. As a professor at West Point, he's got a great feeling for military history as well.

Among the many Learn25 titles I've enjoyed, this is one of my favorites, perhaps my very favorite. Professor McDonald has a knack for both presenting important context to the American Revolution - the enlightenment in American, the Great Awaking, American economic conditions, etc. - and vivid portraits of the men and women who shaped early American history. His lectures are well-organized, engaging, funny and memorable. I give this series my highest recommendation.