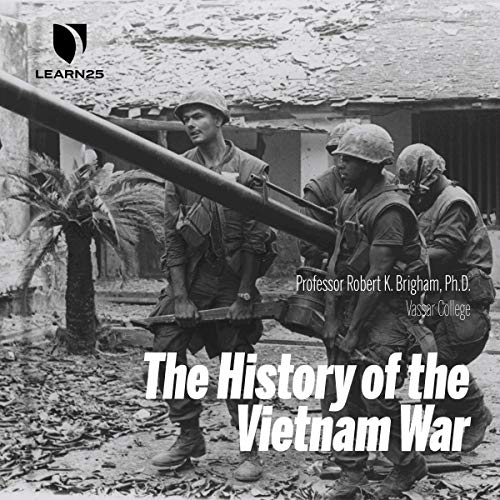 The History of the Vietnam War

A gripping and authoritative 24-lecture history course on the Vietnam War from the award-winning professor who cowrote Argument Without End with Robert McNamara.

In 24 lectures, you will endeavor to answer these questions as you grapple with the legacy of the Vietnam War today. Based on more than 100 trips to Vietnam and extensive interviews with key players from all sides, Prof. Brigham weaves vivid biographical sketches and rich anecdotes into recorded history. His masterful storytelling will help you look behind common assumptions about the conflict.

Not since the Civil War had the American national consciousness been as strained as it was by the conflict in Southeast Asia. Indeed, the controversies that the Vietnam War spurred on the home front are more familiar to many Americans than the policies and motives that guided the conflict. The History of the Vietnam War fills that gap. From a distance of 50 years, you will reexamine the war and its lessons.

Throughout, Prof. Brigham sheds light on the United States and its place in the world today. Under his expert guidance, you will gain fresh understanding of this momentous chapter in American history.

Was glued to this book and finished it quickly. Learned more than ever before about the war in Vietnam.

NARRATION:
There were several instances where he used the wrong word or fumbled a little. In fairness to other presenters I've rated, I almost knocked off a star for those. I just couldn't bring myself to do it, because . . .

CONTENT:
He knows his subject and tells about it in a manner that does not brand him as liberal or conservative. I had to listen to it a couple of times before reviewing because there was so much information.

I was a child in the sixties so I grew up watching the war on the evening news. As a history buff, I learned about the French fighting there before us and wondered why we didn't learn from their mistakes. Mr. Brigham gives us the straight scoop from the context of the times, not just trying to color it by what we know now. He also recommends some reading that I had considered, but haven't gotten to yet. My next history lesson will probably be one of those books.

I highly recommend this presentation.

This is the clearest, most comprehensive history of Vietnam I encountered. Brigham knows the facts and is able to present a balanced yet gripping overview. I especially appreciate his discussion of the larger strategic issues. He effectively puts the war in context drawing out important lessons learned. I respectively disagree with another reviewer who was looking for a more scripted presentation. Above all Brigham is a great teacher. Through his dozens of trips to Vietnam, his interviews with key players on all sides, etc. he presents with passion and first-hand insight. I wouldn't want a more scripted presentation. I found his lectures, like other Learn25 lectures, well organized but authentic. When listening, I felt like I was in his classroom at West Point or Johns Hopkins.

It's a lecture series, not a book. Great! But it sounds like this isn't even scripted - words are jumbled, sometimes he corrects himself. If it sounded like he was in a lecture hall... okay... but he is obviously recording these in a studio. The whole thing is just odd.