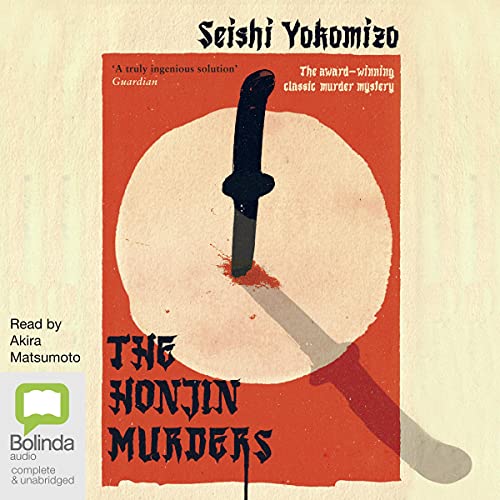 The Honjin Murders is Japan's greatest classic murder mystery, translated into English for the first time.

In the winter of 1937, the village of Okamura is abuzz with excitement over the forthcoming wedding of a son of the grand Ichiyanagi family. But amid the gossip over the approaching festivities, there is also a worrying rumour - it seems a sinister masked man has been asking questions about the Ichiyanagis around the village.

Then, on the night of the wedding, the Ichiyanagi family are woken by a terrible scream, followed by the sound of eerie music - death has come to Okamura, leaving no trace but a bloody samurai sword, thrust into the pristine snow outside the house. The murder seems impossible, but amateur detective Kosuke Kindaichi is determined to get to the bottom of it.

"A classic locked-room murder mystery, the first in the Detective Kindaichi series.... The solution to this mystery came as a complete surprise - exactly what I asked for." (New York Times Book Review)

"The perfect read for this time of year. Short and compelling, it will appeal to fans of Agatha Christie looking for a new case to break." (Irish Times)

"Japan's Agatha Christie.... It's an absolute pleasure to see his work translated at last in these beautifully produced English editions." (Sunday Times)

What listeners say about The Honjin Murders

Enjoyable, definitely. Well read and the story was pretty sweet. Translation seemed to work pretty well. Really would be better if the diagrams in the book were included as a pdf or accessible somehow in the Audible app. It refers to those quite often. It's also little strange that the Audible/Amazon page states that this book was read by "Kelvin Barnes" When the book cover and end credits state it was read by "Akira Matsumoto." No idea what that's about.

This locked room mystery is so intense! Not only is the story first rate, well told, and interesting, but in context, this story is even more interesting. The Honjin Murders was written in 1946 and takes place in December 1939, the month Japanese forces started their occupation of Nanjing, China, known as the Rape of Nanjing, one of the most horrifying and disturbing events in history, which make this well written and intense story even more curious. I highly recommend this book!

I really cannot stand the “Dear reader” device throughout this book. And the narration was very strange, stunted in places. And the female characters were all narrated as simpering.

This is a great series!

How wonderful to have these translated into English. If you’ve never read these books, you’re in for a treat.

I was excited for this one, I had originally planned on reading the paperback. However I figured it would be an easier listen, boy was I wrong. I love Japanese culture and history, but there were so many moments where I wish I had been able to look up the meaning of a word as you can with paperback, especially when it’s difficult to pronounce/spell. I also did not like the story very much, it was all over the place and challenging to really care about let alone be shocked by any twists or turns. And the performance at times had uneven voice over, however the narrator did a good job with pronunciation in my uneducated opinion. Overall disappointed, but happy to try reading more of this genre.

Probably better read than listened to

A difficult review to write as my problems with the book were more due to my own weaknesses with the format and not due to the story or the performance. I love murder mysteries and the thought of one that takes place in a different setting in a different culture was intriguing. The author references many other mystery authors of the era and this book is very much a mix of classic genre themes. This book is a country house murder in a locked room with a Japanese setting. The problem I had was in understanding the Japanese names of characters which makes following a mystery difficult. I think seeing the names on the page would have made it much easier to understand. So in a sense I agree with another reviewer on the need for a PDF. Near the beginning of the book, the author provides several lists of characters. Members of the household where the murder occurs. Members of the family of the victim. In neither case could I retain any of the names or make my own lists because I had no idea how to spell anything and had to slowly develop an understanding of who is who as the story unfolds. There is almost no character development to help with figuring out who is who. A PDF with the lists of names would have helped a lot. It is a short book and a second listen may also help. The author frequently speaks directly to the listener with statements like...That point is important to the solution. He writes as if he is relating a story he has researched and is presenting what he has learned. Part of that involves his use of the notes and work of the doctor summoned to the murder scene. He specifically references sketches made by the doctor that he has "included" in the text. Those reading the book can see these sketches, but as there is no PDF, those listening cannot. So another need for a PDF> The detective is good. He has the standard quirks and somewhat foreign background having got his start in the US. Like the best detectives he is capable of brilliant deductions that keep him just ahead of the other investigators and the readers. The solution is a good one.
The reader has a British accent with a Japanese twist to when pronouncing Japanese names and terms. I am not sure I will attempt more in this series, but I wouldn't mind listening to more books with this reader.

The narrator is fantastic, but the pacing of the story is terrible and the arrogant detective needed a good slap.

this is a truly excellent book, I have a brand new detective series to fall in love with.

Crime fiction by and for connoisseurs of the genre

Many of the subsequent tropes of Japanese crime fiction can be tracked back to this seminal text: the odd, dishevelled, youthful detective, the atmosphere etc. Well read by Akira Matsumoto and yes the Kiwi accent is noticeable but doesn’t detract from the experience.

wears it's influences on its sleeve but this is up there with Agatha Christie and Conan Doyle's best.

Excellent, timeless story. Had to use google a few times to understand aspects of Japanese architecture and music. I liked the narration, but I can understand if others will take umbrage with an antipodean accent.