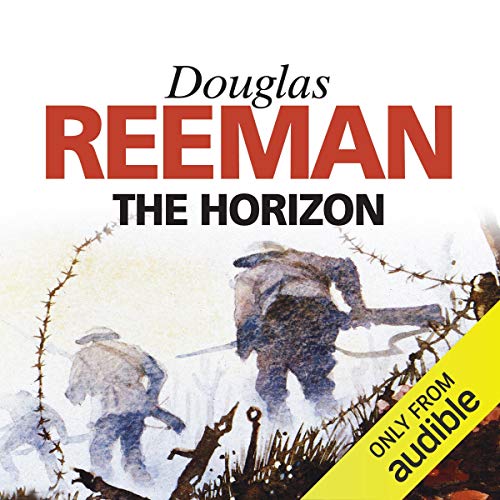 This is the third book in the 'Blackwood' saga. For three generations, members of the Blackwood family served the Royal Marines with distinction. With the outbreak of World War I, at last comes Jonathan Blackwood’s turn to carry the family name into battle.

But as the young marines embark for the Dardanelles, and a new kind of warfare, it dawns on them that the days of scarlet coats and an unchanging tradition of honour and glory have gone forever. First in Gallipoli, and two years later in Flanders, comes their horrifying initiation into a wholesale slaughter for which no training could ever have prepared them.

Caught up in the savagery of a conflict beyond any officer’s control, Blackwood’s future rests on the ‘horizon’ - the dark lip of the trench which was the last fateful sight for so many.

What listeners say about The Horizon

The Best of the Blackwood’s

The Horizon is the third of Douglas Reeman’s novels about the Blackwood family and their trading of service in the Royal Marines. I have read all the Blackwood novels and the Horizon is the one I keep returning to. The story focuses on Johnathon Blackwood and his inner struggle to be the leader that his men and the Royal
Marine high command expect him to be. Although he lives with the inner turmoil of serving in a war that he believe is a futile waste of lives, Johnathon carries on because it is his duty to led. The book is broken into two parts. The first part deals with the Gallipoli campaign and as Australian I was fascinated by the description of the bloody campaign from a British point of view and I believe this is the strongest part of the novel. The second half becomes something of a love story where our hero recovering from the scars of the Gallipoli (both physical and psychological) is called upon to lead a Marine Battalion during the Battle of 3rd Ypres in 1917. He falls in love with a Doctors daughter and the painfully awkward hero manages to win his lady love while leading the trusting souls under his command into the mud and bloody of Ypres. Throughout the novel Reeman keeps the horror and waste of the First World War as the central theme of his novel. While not the best book ever written, it is a novel I enjoy and have listened to several times over the years and I strong;y recommend it to any students of the First
World War.

Reeman does it again.

The Royal Marines have very few stories written about them. The series covers this family of Marines through generations. The brutality of World War 1 has been forgotten by most. This book is not anti-war but it does make you realize the incredible loss war imposes on a country.

couldn't finish, read quite a few Reeman books, this is by far the worst...
weak story, very poor narrator, with some very dodgy character accents...
not worth the money