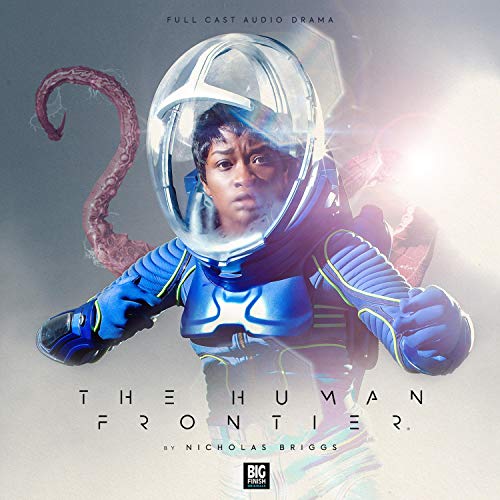 One crew takes the long route, sleeping for 1,000 years, in secret, on a ship called The Human Frontier.

The other crew set off hundreds of years later, at hyper speed.

When the sleepers wake as they approach the planet, the hyper-speed crew have been living there for 300 years already - and they have no clue the ‘sleepers’ are about to arrive.

Part One: Possibility of Life

Two awakenings. One is unexpected, the other is a dire emergency. One brings love. Both bring danger. This is the voyage of The Human Frontier.

There’s a world called Triton. Its people have a long history of struggle and suffering. And they’ve never heard of The Human Frontier.

Is it the Tritons, Nilly, Planet Five...? Who is in control? And what does the future hold for The Human Frontier?

The Human Frontier is a trademark of Red Raygun Ltd.

What listeners say about The Human Frontier: Series 1

Get used to that, there's a lot of gasping in The Human Frontier. Apart from which, I'll try to keep this spoiler free. What else to expect: non-linear storytelling, ie flashbacks, and flashbacks within flashbacks. In terms of construction, the piece it most closely resembles is Creatures of Beauty, Nick Briggs' much earlier 5th Doctor and Nyssa adventure. Those familiar with modern Big Finish and especially Briggs' masterful audio drama M.O. will relish being kept on their toes in what is undoubtedly an immersive concept album which takes it's pure sci fi thesis and boldly goes with it. It takes a while to really achieve lift off, but of course there's much to learn in the who, why, and when department before we go full warp speed, which is all done with intrigue and of course feeds into the later narrative as we explore our thousand year mission to strange new worlds, new life and new civilizations etc. And it would be remiss not to mention the great Bladerunner-esque soundscape

For the price of an Audible credit (read into that what you will) it's got to be worth jumping on board (note: no bonus material with this Audible version).