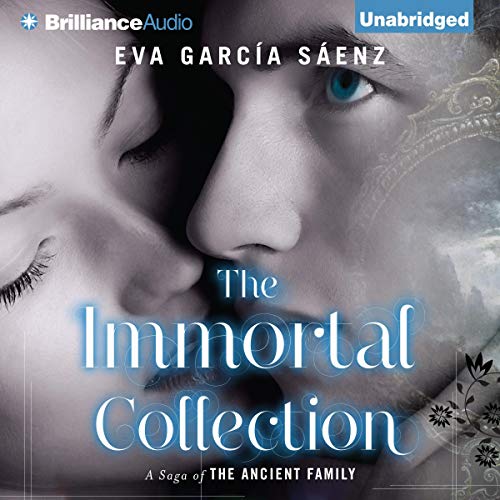 When Adriana, a brilliant young archaeologist, accepts a position at the Museum of Archaeology in her hometown of Santander, Spain, she never imagines that her new boss has lived through the history she can only study. Iago, the charismatic technical director of the museum, is more than 10,000 years old but appears to be only 35. Iago and his family are longevos - people who never seem to age after reaching adulthood. The ancient family is divided: Iago’s brother and sister seek the source of their longevity in hopes of creating more like themselves, while Iago and his father fear the repercussions of the true Fountain of Youth.

A dangerous game of power and knowledge that has played out over eons becomes even more complicated when Adriana attracts both brothers’ attention - and learns their secret. Filled with science, history, and passion, The Immortal Collection transports the listener through time and space, from the days of cavemen, through the Roaring Twenties, to the charming plazas of contemporary Spain. Ancient history meets cutting-edge research in this modern love story and sweeping historical saga.

What listeners say about The Immortal Collection

Would you listen to The Immortal Collection again? Why?

Definitely would read many times.

All the characters are interesting, but of course Adriana and Iago are my fave.

What does Jeff Cummings and Angela Dawe bring to the story that you wouldn’t experience if you just read the book?

Jeff and Angela bring the personalities of the characters to life that enjoy with the audio book that I wouldn't have if I just read the book and I so looking forward to the 2nd installment in this saga in audio form as well.

If you could take any character from The Immortal Collection out to dinner, who would it be and why?

Probably Hector/Lur because he would have such a wealth of knowledge of human histories and experience more so than any of the other character, even Iago

Wow, wow, wow...such a good read. Thoroughly enjoyed every minute of this story. Such rich characters and story. Well written both in structure and content. So glad I took the time to read this book. Can't wait for the 2nd installment of this story.

Best Book I've Listened To In A While!

I normally love Angela Dawe because she has a lovely voice but her voice just seemed to make the book even more dry and uninteresting. I just noticed Jeff Cummings was the male voice. Another normally great narrator! There was just no saving this book.

Could have been shorter

Yes and no. The plot was interesting, as were the characters, but it just seemed to drag in places. Since this was an interpreted book I felt lost at times with all the foreign places and names. The history lesson was interesting, but again too long at times.

A lot of questions were left unanswered. It does end with a cliffhanger so maybe some of them will be answered in the next book but I didn't like it enough to continue with the series.

Both narrators did an excellent job with the foreign names and places.

Way too long and filled with boring monologues

It is not that this book was bad it was just too long. While details and building are the characters traits and personalities are good, this author provided an over abundance of just tedium.

The storyline and plot where very good but honestly we could have removed the 10 hrs of this book and had a wonderful book. I felt like I was in a mandatory history lesson. Which is NOT romantic. Then after 17 hours the author STILL ends with a cliffhanger..... REALLY

We could have closed out with and what happened to her cousin and his kids, whether or not the Dana has children.... Oh but NO! It's like putting me through 10 hours of Anthropology 101 was not enough just to get through the plot then the author provides NO closure. Not going through another 17 hrs.

If I hadn't purchased this so long ago, I would return it. I don't know if I will even be able to finish listening to this book, which will be a waste of money. The female lead's voice is truly nauseating to me and grates on my nerves, she sounds angry and completely unnatural, very forced, and the drawing out of odd words and the nasal tone... Oh my... Instead of listening relaxingly, it makes me feel anxious. I wish I could find this book with another female narrator. 2 stars for performance just because of her. Male lead I could take or leave. I've heard some male leads that made me want to hear his voice all day, this is not one of them.

It Dragged a little

I figured out what was happening well before the Characters in the book. I found it hard to believe that the characters could live so long and not learn anything. There were several side issues left unsolved.

I loved the story, kind of didn't love the voice actors though...I'm not sure why.

Not a fan of Angela Dawe's narration

I am not sure I will be able to finish this book in audio version because of how bad one of the narrators is. I actually just yelled at her to shut up while listening to this book. She has a pleasant voice, but emphasizes and lengthens every vowel sound she comes across. It's incredibly irritating.

Where does The Immortal Collection rank among all the audiobooks you’ve listened to so far?

This book was outstanding - and the story was like nothing I have read before. Will definately read again and again

Lago was my personal favourite and I could understand the way he held back. I enjoyed the way the relationship built with the main female character, Adriana. There was enough depth in the portrayal of the characters to provide interest.

What does Jeff Cummings and Angela Dawe bring to the story that you wouldn’t experience if you had only read the book?

I like the use of two narrators providing the voice for the main male and female characters. Good jobs well done

Not all the living history in a museum is on show.

I will watch for more books and there was opening story lines left for sequels.

If you could sum up The Immortal Collection in three words, what would they be?

Who might you have cast as narrator instead of Jeff Cummings and Angela Dawe ?

Jeff cummings was fine, but I think a softer voice was needed for the female narration. Angela Dawe seemed to be 'reading in capitals' , with the tonal ebb and flow all wrong!

I only managed about 4 hours then couldn’t stand that dreadful female narrator any longer, she has the most appalling voice, harsh, grating and strident. I was interested in the story and the male narrator was decent enough but Angela Dawe has, to me, an ugly voice which I couldn’t tolerate any longer. I may go back to this audiobook because the idea of these long lived people gives rise to interesting back stories over millennia and any story involving archaeology always appeals to me but I wish this audiobook could be re-released with a new narrator or with just the male narrator. Everyone has their own favourite voices, mine happen to be Jeff Harding and David Monteath and I definitely prefer male voices or at least women like Emma Gregory who reads the Alexandra Walsh Marquess House trilogy and others with pleasant accent-less deeper voices.