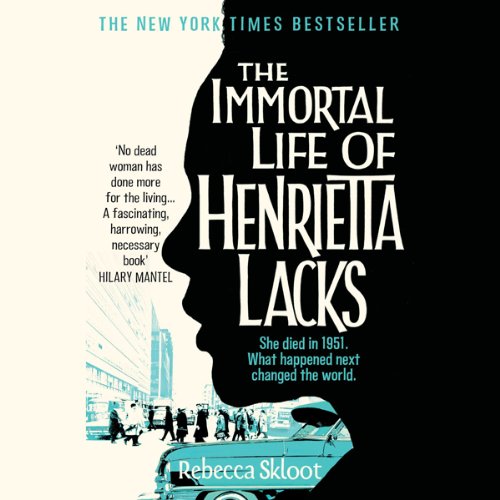 The Immortal Life of Henrietta Lacks

Her name was Henrietta Lacks, but scientists know her as HeLa. She was a poor Southern tobacco farmer whose cancer cells – taken without her knowledge – became one of the most important tools in medicine. The first ‘immortal’ human tissue grown in culture, HeLa cells were vital for developing the polio vaccine; uncovered secrets of cancer, viruses, and the effects of the atom bomb; helped lead to important advances like in vitro fertilization, cloning, and gene mapping; and have been bought and sold by the billions. Yet Henrietta herself remains virtually unknown, buried in an unmarked grave

Now Rebecca Skloot takes us on an extraordinary journey in search of Henrietta's story, from the ‘coloured’ ward of Johns Hopkins Hospital in the 1950s to East Baltimore today, where her children and grandchildren live, and struggle with the legacy of her cells. Full of warmth and questing intelligence, astonishing in scope and impossible to put down, The Immortal Life of Henrietta Lacks captures the beauty and drama of scientific discovery, as well as its human consequences.

What listeners say about The Immortal Life of Henrietta Lacks

A poignant tale of science and humanity

This story deserves to be read or heard by the world. Breathtaking writing, stellar narration.

a gripping and emotional story. the story has been narrated in a very engaging manner.

I loved how the story unravels and ends! For a fiction lover like me, I found this biography to be more interesting, thanks to the author Rebecca Skloot! The effort taken by her to keep the reader engaged and glued to the book rather than getting bored is really appreciable! I simply loved the narrators Cassandra Campbell and Bonnie ! Their voices actually bring life to the characters which make you feel yourself being a part of the story!

What did you love best about The Immortal Life of Henrietta Lacks?

What other book might you compare The Immortal Life of Henrietta Lacks to and why?

I also listened to The Help this year, and think there is something to be gleaned from these two extended works about the healing power of storytelling. While I often shrink back from white people telling black people's stories, both these books actually tackle this problem head on, exploring the problem of who is telling whose story and why. Restoration through narrative.

Have you listened to any of Cassandra Campbell???s other performances before? How does this one compare?

She was one of the narrators in The Help apparently (must have been that weird third person section?) Anyway, I thoroughly enjoyed her reading.

A story of science that comes from the heart.

I found this a very interesting history about the people involved in changing the face of biology as we know it. From the family and their experiences of being involved in the process to the scientists. Ethical practices have changed over time and it is interesting to consider whether the same thing could happen today.

A beautifully written book, very impactful and perfectly narrated. The story and characters are so alive that one becomes completely absorbed by the fascinating tale of one woman’s journey to find the truth about the mother she never knew.

What a great book. There were several times I got emotional, hands to Rebecca. Thank you

just wait the first chapters, it don't get to the bottom of it. then it gets exciting!

Extremely over hyped, and in no way a science book

I went into this having read many positive reviews, and I expected a in depth story into the scientific breakthroughs which resulted from the discovery of HeLa cells.

Instead what I got was an in depth story of how the writer of this book struggled to research the history of the person from whom these cells were drawn - Henrietta Lacks. It's incredibly self indulgent, and spends literally hours on how diligent the author was. The rest is all about the life (and death) of Henrietta and her family. Aside from her remarkable cells, the life of Henrietta was unremarkable in the extreme (for the time), and this book could have simply been a general history of the lot of poor, ultra religious African Americans in the deep south in the 1940s and 50s.

There is virtually no science in this book at all, so if science is what interests you, this book will not. I also found the narrator extremely irritating, as she spends much of her time either attempting (and failing horribly) to do deep south African American accents, or adding quivers and shakes to her voice during emotional moments in the text. It's one of the worst readings of a book I've yet encountered on Audible, and I've listened to a lot of audiobooks.

I was really moved by this book. I had heard of HeLa cells before, having studied and worked in medical science for most of my career, but I had never heard the real story behind them. Apart from being a great read the book raises a lot of questions about bioethics, fairness and the injustices of the past. Definitely a story that needed to be told!

This is unlike anything else I have read. It is hugely enjoyable and the narration superb. Read it and enjoy.

loved the book and the narration. it has really opened my eyes about research. a must read.

The story is fascinating in and of itself, but it seems that the author cannot really decide whether to go for good story-telling or scientific accuracy. The result is an enjoyable, but somewhat wobbly book. The real problem herr lies in the narrator. Far too grating and un-nuanced a voice for my taste.

I enjoyed the book on the whole. I found the science and the story of Henrietta really interesting. I have to say I did find the story of the author and her involvement with the family a bit self indulgent and tedious at times. I think the interesting story makes up for the negatives and I would recommend reading it.

A bit academic, but a great listen. I may have given up if reading it as quite a lot of technical bits.
I do like an interesting factual book, occasionally.

This book was not what I expected but it is very well written and very sympathetically recorded. It is a tale of a woman born in the very shadow of her ancestors slavery who unknowingly changes the face of modern medicine. At the same time the medical miracles are beginning Henrietta dies in pain and her family are left bereft, poor and traumatized. The tale is equally parts inspiring and tragic.

A Book Everyone Should Read

This one of the most distressing, moving, informative and important books I've read, thus far. I appreciate the time and effort the author put into researching and writing this book. I believe it's a book everyone should read.

So much to learn from this beautifully crafted story. The human tale and what we learn about prejudice, poverty and segregation is every bit as important as the unquestionable contribution that the cells of Henrietta Lax have made to all of our lives. I commend this book to everyone.

Fabulous read it bought out all sorts of emotions ... you can't beat a true story. All of our lives are forever changed because of this women. #grateful

me, my cells and I

Thoroughly enjoyed a very human story, and it's far from over. Take a bow Hela.

Even though I'd trained as a rn and read lots of medical info, I had never consciously heard of Hela cells. Rebecca must have done almost endless research for this book, and I thank her for it. The family she dealt with over reacted when it came to the religious aspect imo.
However I was swayed between entitlement of family and freedom of research. Our modern society gets too hung up on money at times.
I found this a fascinating story. Its opened lots of thought paths in my brain for further interest in the field experiments and research.

One of the best books I ever read! a mix of biography and science that you can't stop listening! Amazing!

I was surprised by this book. I thought the author did an amazing job of pulling all the detail together to create a really interesting true story that had you there to the end. The most impressive thing about it was the author - I got to really like her for her compassion, resilience and creativity. It took 10 years, but definitely worth it. Added bonus, I now have a much deeper understanding of cell research and the ethical issues around it. It actually made me cry a couple of times, and certainly had me laughing. Well done! I'm really glad I read it.

really interesting story. what am amazing thing to dedicate your life to. privacy & consent issues definitely ongoing & something to be aware of. fantastic writing.

This is an excellent page turner. A touching human story that challenges readers to think about many aspects of morality in our modern society. Medical ethics, racism, poverty, religion, capitalism.....

Love this book I found it to be so well written and the science was easy to understand. Plus a great human story sewn together by brilliant writer.

whether you're a scientist, a doctor, a patient or the public this is a fantastic insight into the amazing world of medicine, medical ethics and the lives of the people who disappear in history. fantastic insight but someone who acts well as an unbiased third party.

A sensitively handled true story. The author's intent, as described in her afterward, is evident throughout. What a journey.