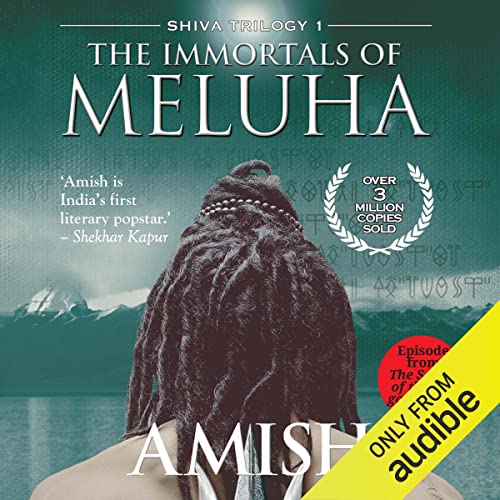 The Immortals of Meluha

The year 1900 BC. In what modern Indians mistakenly call the Indus Valley Civilisation. The inhabitants of that period called it the land of Meluha–a near perfect empire created many centuries earlier by Lord Ram, one of the greatest monarchs that ever lived.

This once proud empire and its Suryavanshi rulers face severe perils as its primary river, the revered Saraswati, is slowly drying to extinction. They also face devastating terrorist attacks from the east, the land of the Chandravanshis. To make matters worse, the Chandravanshis appear to have allied with the Nagas, an ostracised and sinister race of deformed humans with astonishing martial skills.

The only hope for the Suryavanshis is an ancient legend: ‘When evil reaches epic proportions, when all seems lost, when it appears that your enemies have triumphed, a hero will emerge.’ Is the rough-hewn Tibetan immigrant Shiva really that hero? And does he want to be that hero at all? Drawn suddenly to his destiny, by duty as well as by love, will Shiva lead the Suryavanshi vengeance and destroy evil?

This is the first book in a trilogy on Shiva, the simple man whose karma recast him as our Mahadev, the God of Gods.

What listeners say about The Immortals of Meluha

The way this book has been presented with the background music and effects resonating perfectly with the story line, I felt like watching a movie, thus listening for hours at stretch. Simply superb.

Great Storyline. Narration combined with background music and sound effects helped me to visualise the story events. Loved this book and eagerly waiting for next book in this series (Secret of the Nagas) to be added.

Loved it. Very well performed. The story is beautiful.
The performance by Audible team adds delight to the narrative told by Amish

The story is amazing but the way it has been narrated with background music, its nothing less than a movie. One can visualise every scene because of how beautifully it has been put together in this audible. Must recommend and waiting eagerly for other parts to be available on audible.

Just mesmerising. Indeed a great work my Indian team. Waiting for other editions guys. Keep up.

Narration is just so amazing I can visualise the entire book