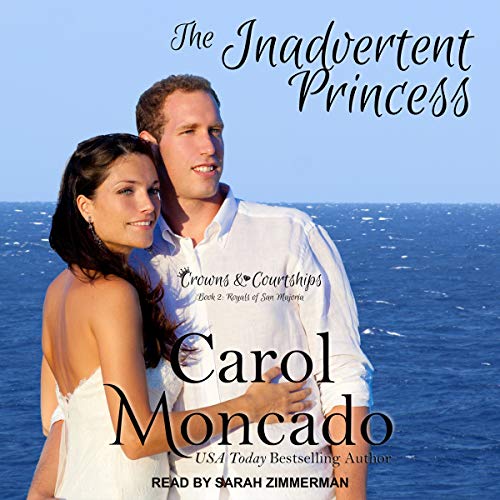 Anabelle Gregorson is happy. More or less. She works for her best friend at a yarn shop in Akushla, is raising her little sister after the death of their parents, and just met the most handsome man on whom she ever set eyes. He seems to like her, too.

Prince Kensington of San Majoria never expected his time in Eyjania to result in love. But from the moment he met little Gracie and her big sister, he was smitten, even if she doesn't know who he is. He kind of likes having someone enjoy spending time with him and not his titles.

When Anabelle tells him she's going to have to marry King Benjamin of Eyjania, Kensington can't let it happen. They run off to elope, but the ceremony must occur before he has a chance to tell her the whole truth.

What will Anabelle think - and will their relationship survive the royal revelation? Even if it does, will angering the king and infuriating her powerful grandfather cause no end of trouble for the inadvertent princess?

What listeners say about The Inadvertent Princess

This audiobook was great. I love royal plot ideas. This book does not disappoint, it was interesting from beginning to end. The little sister was adorable. The plot tangent with big sister taking care of little siblings after family death is a very heart warming and character depth.

I loved this story! The narrator was great as was the writing. I really enjoy love stories that have kids in them and this one did not disappoint. I also love large families and seeing their dynamics. It is a fast read that moves along quickly and leaves you wanting to pick up the next story soon.