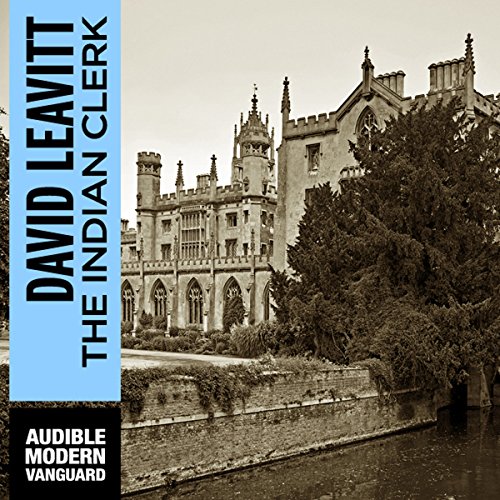 This critically acclaimed and emotionally charged novel about the strange and ultimately tragic relationship between an esteemed British mathematician and an unknown and unschooled mathematical genius is historical fiction at its best: ambitious, profound, and absorbing.

Based on the remarkable true story of G. H. Hardy and Srinivasa Ramanujan, and populated with such luminaries such as D. H. Lawrence, Bertrand Russell, and Ludwig Wittgenstein, The Indian Clerk takes this extraordinary slice of history and transforms it into an emotional and spellbinding story about the fragility of human connection and our need to find order in the world. A literary masterpiece, it appeared on four best seller lists, including the Los Angeles Times, and received dazzling reviews from every major publication in the country.

"Mathematics and its paradoxes provide a deep vein of metaphor that Leavitt uses to superb effect, demonstrating how the most meaningful relationships can defy both logic and imagination." ( The New Yorker)
"Ambitious, meaty, extensively researched…[a] richly layered, rueful portrait...Leavitt has tapped into marvelous material...stimulating and refreshingly original." ( San Francisco Chronicle)
"This novel is brilliant. It is a beautiful and creative work that manages to portray a melange of the literary, historical, romantic and academic, with breathtaking prose and deeply nuanced characters." ( Pittsburg Post-Gazette)

What listeners say about The Indian Clerk

Since the main characters were top mathematicians, I was expecting a book with a strong mathematical plot. This book is really about homosexual relationships and there is not really that much about mathematics. If gay oriented literature then this your thing then you will quite likely enjoy this book, if not you will probably find it quite tiresome.

I would like to suggest that the summary be changed to make at least some reference to the main thrust of the book.

I bought this thinking it would be a more non-fiction presentation, but found instead a truly wonderful work of literature, presenting the daily reality of England before and during WW I. G.H. Hardy is used as the story's narrator, and his own complex and highly period-specific character guides and shapes the tale. The audio narrator does an impeccable job of timing, emphasis and character portrayal. The mathematics, thankfully, is not entirely ignored; it is given a literary spin that is not challenging but remains true to the spirit of mathematics. The portrayal of homosexuality so prevalent in Cambridge circles at the time is thoughtful and emotional, without any of the political correctness that has colored other novels I have read.

A unique and completely enjoyable experience

If you could sum up The Indian Clerk in three words, what would they be?

Malcolm gives each character a unique voice. He has obvious appreciation for the material.

Based on real events, this is a captivating work of fiction. It incorporates real historical figures and fleshes them out with authentic personality. It is unlike anything I've ever read. The story is fascinating and extremely engaging.

The narrator of "The Indian Clerk" is a reserved, gay mathematician (G. Hardy, a historical figure) from a middle-class background who, despite belonging to one of the most elite intellectual societies of his day, always feel a bit out-of-place in pre-WWI Cambridge. With a fellow mathematician, he manages to bring an obscure Indian mathematical genius, Ramanujan, to study and work at Cambridge. The book is a nostalgic account of an imagine relationship between the two men, one English, one Indian, who are united by their love of mathematics and divided by their cultural differences. A superb depiction of the pre-WWI and WWI era (one of my favorites to read about), as well as a bittersweet tale of a man's love for another.

New for me perspective on the lives of Trinity men

I went looking for background on EH Neville and I came away with new insights on GH Hardy and Ramanujan. The fictional parts gave color to the underlying history.

Buy Leavitt, but not this one.

I'm a fan of David Leavitt's writing and had already bought 'The Indian Clerk' in paperback. But I really struggled with it, and started reading it twice, never getting more than a quarter way through. So when I saw it on Audible I decided to buy it thinking that perhaps I could get into the book this way. But although I did finish both parts, it was a bit of a hard slog. The narration is really tedious. The reader's downward inflection is irritating within minutes, so imagine seven hours of this weary narration. I did feel there was a great story in there somewhere, but the book needs a brutal edit. Way too long. Too many mathematical equations are fleshed out at the expense of the potentially far more interesting human relationships, which somehow you never really get your teeth into. I only suffered this audiobook out of respect for Leavitt's other work, but despite my optimism, it never really got going.

this is the first audible book that I have thouroghly disliked. The narration was too monotone and had very little variation. The story, which sounded fascinating and based on true incidents managed to be 'ho hum'. Sorry, but I couldn't finish part 2. I would be interested to hear what othes have to say.

A book more based on gay love than science

I was excited at the prospect of a book based on this intriguing
character but was disappointed. If you want a book about a gay love you wont be.