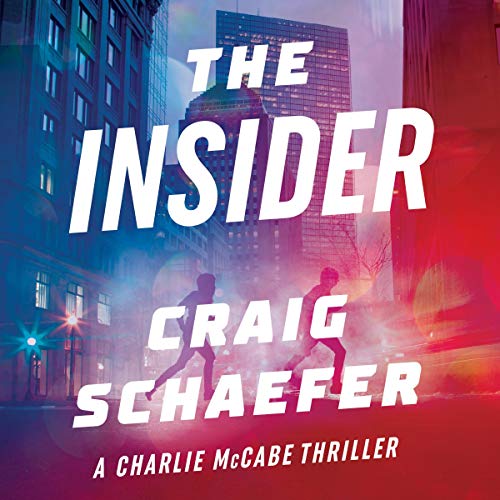 Move over, Jack Reacher and Kinsey Millhone: cast-iron bodyguard Charlie McCabe is back in Craig Schaefer’s gritty sequel to The Loot.

Hard-bitten bodyguard Charlie McCabe is lucky to be alive after her recent foray into Boston’s criminal underworld. So she’s taking no chances with this next job: protecting Hayden Cobb, key witness in the trial against a trio of murderous cops known as the East Boston Three. If Cobb drops dead, the Three walk.

After an attempt on Cobb’s life, Charlie suspects the Three have somehow put a hit on him from behind bars, and the assassin’s still at large. And when notorious loan shark Jimmy Lassiter is dragged into the mix, he retaliates the only way he knows how - by striking at the heart of her family.

Now it’s personal. With her father held hostage and her client in profound danger, Charlie must act fast. Far too many lives are at stake, and though she knows she can’t protect everyone, she’s gonna try.

What listeners say about The Insider

I must agree with Wayne (Matthews, NC). This is an outstanding second book in the Charlie McCabe series. I don’t understand the low ratings given by some listeners. This book and author deserve better a I hope Schaefer continues to add to this exciting series.
Susannah Jones does an excellent job narrating.
VERY HIGHLY RECOMMENDED.
Thank You.

Even better than The Loot (Book 1)

I do not understand the two 2 star ratings here at Audible. The average rating on Amazon is 4.7 stars and the Goodreads average rating is 4..43 stars. In any case THE INSIDER is the second novel in the Charlie McCabe series. She is a bodyguard for rent with a strong military background. Charlie's dad has a gambling habit that has him in trouble again. This time the trouble is life threatening.

For Kindle Unlimited members this audiobook is free to borrow. For others it costs much less than a credit if purchased along with the Kindle version at Amazon.

it was good until it just wasn't anymore

The story started out fine but eventually there were too many characters and subplots going on. I found myself zoning out and not knowing what was even going on anymore. Not a horrible read/listen, but not the best.

it took me 3 attempts to finally get through this book. it most difficulty needs a different narrator. the story took forever to get to the end

Well written and well performed! Plot moves along nicely with good twists. The action and suspense are solid. Excellent variety of voices! It was easy to forget there’s just one narrator. Characters are interesting and given good depth. I look forward to more stories from this author and hopefully read by S. Jones!

Craig Schaefer is one of my favorite authors, and I am really enjoying this series. The characters, including the villains, are realistic and believable. The heroes are all likeable. The action is nonstop. A very enjoyable read.

This was a good 2 book series and I hope the 3rd release comes soon. With that being said, I do have a couple of thoughts I'd like to share. First, the narrator, Susannah Jones was the perfect choice. I enjoyed her voice throughout the book. Second, I think there were just a few too many characters in this story. Most of the time, I find myself doing other things while I listen and if the story is strong, I don't have to back up and re-listen to focus because I'm distracted. Because there were so many characters, I found myself losing track and so many times, I was lost after a few moments break in my concentration. HOWEVER, most of that problem was mine. When I am driving, I always have an Audible book going and my concentration is just on the story. So please don't let my thoughts on a couple of negatives deter you from buying this book. I still gave it a 5-star rating because it certainly deserves it.

I really liked both the books in this series. I listen to a lot of them and these are good ones. Hope the next in the series follows soon.

A strong entry in Charlie McCabe series. Schaefer creates fantastic and ultra-competent female characters. I'd love to read anything from Nina's POV one day, even though it could be an alien vision of the world.

I enjoyed this series more with this book than the first. As the characters histories are revealed to us, the more interesting their lives become. Great job on these characters! Lots of action and unexpected things are happening! Narrator did a great job also!