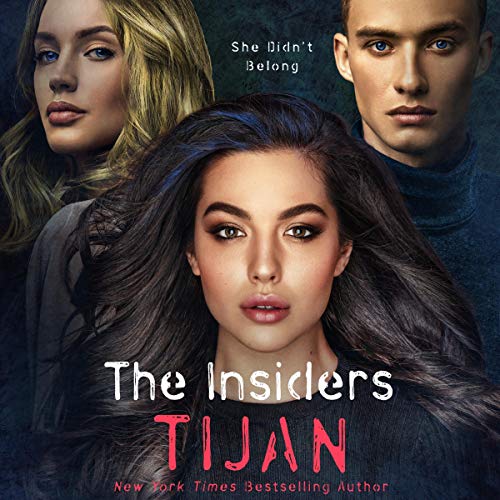 The Insiders is the first in a brand-new romance trilogy from New York Times best-selling author Tijan!

Bailey is as normal as could be, with a genius IQ and a photographic memory. But still, normal for her. Then, things happen - a guy breaks into her house in the middle of the night to take her hostage. She finds out her father is actually billionaire tech genius Peter Francis, the same guy she’s idolized all her life. She learns all this when she meets dark, mysterious, and electrifying Kashton Colello. He’s an associate of her father’s, and he gives Bailey two choices - go with him and meet her father or survive on her own because those kidnappers are going to try again. It’s a no-brainer.

After this, three things become clear for Bailey:

1. She’s living at her father’s sprawling estate, complete with bodyguards and the best security that money can buy.

2. She’s no longer an only child. She has three siblings and has no idea what to do with them and vice versa.

3. She is being guarded by Kash himself. Personally guarded. And there is a lot of guarding going on there and some of it is going to drive her crazy.

A complete outsider in a world of wealth and decadence, Bailey has to find her way within a family that has more secrets than she could have imagined. One of these secrets could be deadly....

“I can always count on Tijan to write an action-packed, intense, emotional story that will have me invested until the very last page.” (Helena Hunting, New York Times best-selling author)

What listeners say about The Insiders

Maybe if was because I was flipping from kindle to audible.... but I didn’t feel the connection between Cash and Bailey. I very much disliked the voice that narrators from Baileys POV. The picture from the cover, verses who she is described to be verses the voice narrated did not match up. With the voice narrating, I pictured a young tomboy from new jersey. Probably wears baggy pants and open flannels over a tank top and dirty shoes. So my picture of Cash as this older hunky muscular man gave me the impression of a guy robbing the cradle. And don’t get me wrong... I’ve read that Thorpe and I don’t mind it. She just didn’t seem like the kid genius in grad school so I couldn’t really get on board with the romance side of the story. I just didn’t think the voice matched Bailey.

The story was good. I liked that cliffhanger wasn’t like crazy. It was mostly tied up. And the second book will clearly be another adventure but not like it’s one book split into three books to make extra money. Which I appreciate. I loved most the characters. I can clearly picture her mom/Chrissy and father/Peter. For some reason I let getting this Meet the Robinsons vibe? Like the Disney cartoon? I think because it’s this big mixed dysfunctional family of halfway geniuses on this huge estate. Like I half expect there to be a legit time machine in the basement. Just think about it. Overall good book. Looking forward to the next one.

I love Tijan's work, and while this was entertaining I can't say this is her strongest work to date. The story is interesting, no doubt, but the relational development between Bailey and Kash is severly lacking. I hope their relationship gets more meat to it in the next book. Overall I'd say this is a good start to a series. I'm looking forward to what comes next, and I really hope the next book is dual POV so we can get into Kash's head a bit more.

tijan did it again

tijan did it again in creating an amazing story love it it is worth reading. Narraratted by emma galvin she was amazing as well and im very picky about narrarators

This book was so good. Had me hooked hope there’s more to come cuz the way it ended left me wanting more

Disclaimer - this review might be biased because o have a writer’s crush on Tijan. She always has a way of making characters come alive, of bringing twists and turns , of making me laugh and cry - sometimes in the same sentence. She’s an artist with her stories and I’m a total fan girl.

Narration: hadn’t heard anything from Emma before but she did a brilliant job.

Story: can’t wait for the next book!!

Such an A-M-A-Z-I-N-G story! I can’t wait until the next installment. Emma Galvin did an outstanding job narrating and Tijan’s writing never disappoints. Such a good book!!!!

I loved this book! I couldn't put it down, I read the whole thing in one day. I loved the Narrator, her voice fit Bailey's character so well and she did well with adjusting it to the male characters.

love love love Tijan! 5 star for story. Zero stars for narrator. This was another great storyline. I just wish the narrator was different, (who picked her??!?!?!?!?!!). I could hardly stand the nasally childish voice, but I trucked on because the story was great. Supposed to be a 22yr old woman's voice!!! This almost ruined it for me. I had to download the book and read most of it. Will Not be listening to any by this narrator again, unless it's a story of a prepubescent boy.

A web that brings you in


The web that webbed during this book. This complex story line continued to get more intriguing and every time time I think I had an answer I also had five more.

Bailey is learning her world is bigger than she thought. She has to learn to navigate all these secrets to find a balance from the new and the old. She is also smart and strong and develops a strong connection with Kash.

Kash character is strong, intense and demanding yet has a sweet side that only Bailey can bring out. These two are an unlikely pair that you just can’t help hope for a HEA.

This is an incredible start to a fantastic new series. The drama, suspense and intrigue was amazing.

Great story. enjoyed it and found it was very easy reading. I think the characters could do with a bit more building to get to visualise them a little more.

Unfortunately I found it disappointing

It just didn’t come together, There seems to be a lot of gaps in the storyline. Information that when revealed was Underwhelming. Strange interactions between characters, Nobody seem to react like that normal people would?

As always Tijan brings it! I love the characters. I am looking forward to the next book!!!

Tijan did it again!

Another amazing power couple ready to take on the world!
I wish I had waited until books 2 & 3 were released.